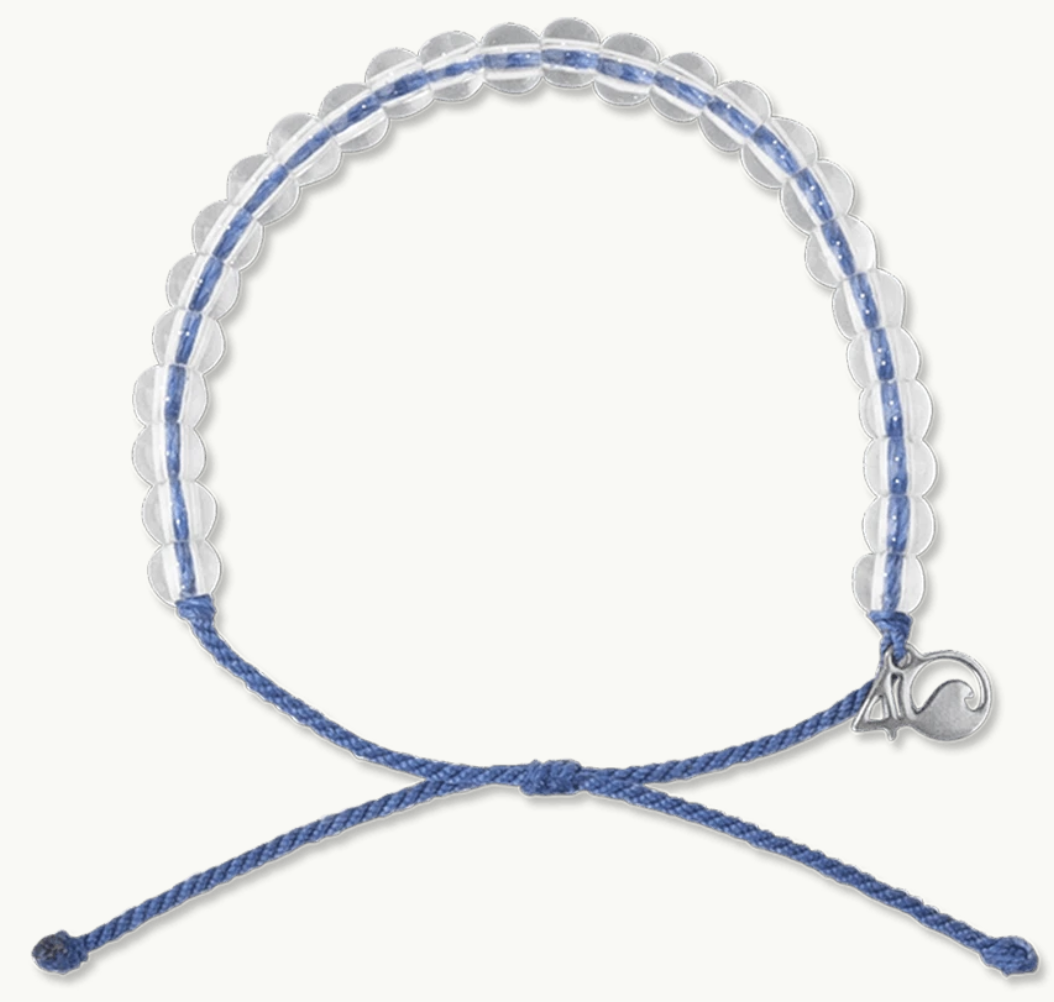 My impression of 4ocean is that the company is passionate about the issue of ocean pollution, in particular plastic waste, and was motivated to bring greater awareness to this problem through a circular system. They collect and recycle plastic waste that has been discarded in the ocean, and turn it into a symbol for activism, evidently eliminating the need to produce new raw materials in order to craft their product. Their jewelry has a meaningful message behind it. My reasoning behind rating “what it’s made of” at 2.5 Earths is that the product relies heavily on recycled materials collected from the land versus the ocean. While it is still using a circular cycle, the impact would be more meaningful if the bracelets were generated from 100% ocean-collected plastic and glass. In terms of “how it’s made” and the company as a whole, I couldn’t give a 3 Earth rating because there is always room for a company to improve its sustainability practices. Possibilities could be through shipping their products more sustainably or eliminating the use of one-use packaging like twist ties, and the company must always aspire to be better. That said, I do believe that 4ocean has genuinely made a positive impact by bringing greater awareness to ocean waste and demonstrating what can be done with recycled materials. I am very comfortable saying that this is a company I would support.

The iconic 4ocean bracelet is a symbol of the clean ocean movement and ending the ocean plastic crisis, with clear recycled beads strung along colorful cords. 4ocean prides itself on being a “business for good,” having been certified by GreenCircle and other environmental standards. GreenCircle is an independent organization that follows the life of the recovered ocean plastic and verifies that all products supposedly made from the 4ocean plastic are, in fact, made from the plastic that has been collected from the ocean and coastlines. The colorful cords are recycled in China and made from certified 100% post-consumer recycled plastic, approximately 5% of which is reclaimed ocean plastic. Similarly, the transparent beads on the bracelets are also recycled in China and made from certified 100% post-consumer recycled glass, with 5% being reclaimed ocean glass. Finally, on each 4ocean bracelet, there is a stainless steel charm with the 4ocean logo, a 4O with a wave inside the “O.” Each charm is made from 95% recycled stainless steel, also manufactured in China. I decided to rate what the 4ocean bracelet is made of at 2.5 and not higher because of the plastic and glass that it is made of. For the string and beads, the materials are sourced only 5% from the trash the company collects. Understandably, the recycling process is difficult, and as a still relatively young company, they are developing their sources. However, I would love to see that 5% increase, and at that point, I might give it a higher rating.

4ocean was founded after two friends went on a surf trip to Bali, Indonesia, and saw firsthand how bad ocean plastic pollution is. Since this is where the company first began, it is fitting that the production of all 4ocean bracelets is in Bali. Unlike many growing businesses that use factories to mass-produce products, all of the bracelets are hand-assembled by the 4ocean workers in Bali. These workers are skilled local artisans that support the company’s mission to help rid the world’s oceans of plastic, an issue that is very close to heart for many of them given the conditions of their own home. I think the fact that the company chooses to have the bracelets made by hand in Bali even after 6 years really shows their dedication to the message of 4ocean. Most companies would have moved onto a larger factory production by now, but 4ocean is committed to being a sustainable organization and continues to do things “the old fashioned way.” In this case, I think that is much more meaningful than changing with the current technological trends.

4ocean is a company whose mission is very simple, to help rid the oceans of plastic waste left there by humanity. The inspiration for the company came from a surfing trip to Bali, where the two founders were surprised by the volume of plastic waste that had collected in the water and along the beautiful beaches. Realizing that the oceans were becoming polluted with plastic debris, the two set out to bring greater awareness to this growing problem. They began by hiring boat captains to work as cleanup crews collecting plastic and other harmful products from the ocean and along coastlines. Since 2015, the company has grown and now has crews in Florida, Haiti, Bali, and Guatemala. 4ocean’s premise is to use business as a force for good. The company is a certified B corporation, meaning they meet the highest standards for public transparency, social and environmental performance, and legal accountability. In addition, they have received the Global Recycled Standard certificate, which verifies that all the products used in the bracelets are made of 100% post-consumer plastic and glass products and participate in the SeaTrees Ocean Positive program. This organization is significant in that it recognizes companies working towards verified climate neutrality. For 4ocean, this means offsetting the company’s carbon footprint each year by restoring blue-carbon ecosystems, like coral reefs or mangrove forests. The company has also recently started working on a closed-loop or circular business program for all its products. The idea of this is to eliminate unnecessary waste by collecting old 4ocean products and either properly recycling them or turning them into new products.