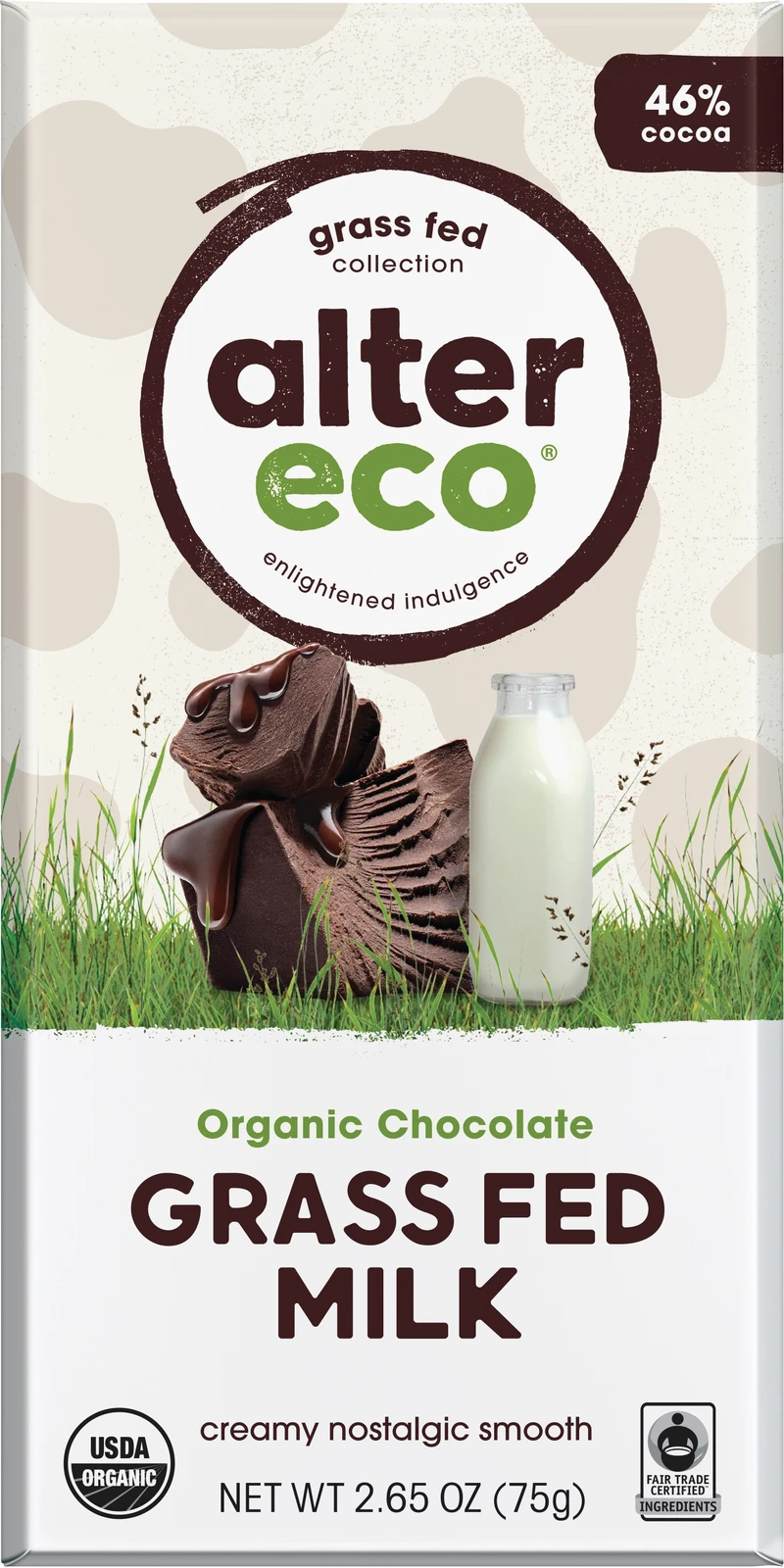 Alter Eco feels like a genuine brand that is striving to make meaningful change. I tend not to trust companies, especially those big enough to be sold at Fred Meyer, but Alter Eco feels like a brand I can get behind. A big piece of this is transparency; they have a ton of information about their initiatives and progress, sustainability and otherwise, on their website, and it isn’t just the good stuff. I get a very sweet vibe from their website, from things like the fact that they know their cows’ names and they have bios about the women working in the coops that are part of their cacao supply chain.

The bar I reviewed is their grass fed milk chocolate bar. Its ingredients are all organic - as is everything sold by Alter Eco - and the three out of the five ingredients that can be Fair Trade certified (raw cane sugar, cacao beans, and cocoa butter) are. Their organic milk is certified organic both by the USDA and the Swiss. They provide information on how their grass fed milk is a better source of heart-healthy fats compared to conventional cow milk (which is true: grass fed milk has higher levels of omega-3 and conjugated linoleic acid, and organic milk has lower levels of omega-6, while the levels of these fats in conventional milk increases your risk of cardiovascular disease, obesity, and diabetes). Their cows are also not fed antibiotics or growth hormones, supposedly because they aren’t “packed into feedlots” like conventional cows. The packaging for the bars is recyclable aluminum foil, FSC certified paper, and compostable boxes; Alter Eco has industrially compostable foil-ish packaging for their individual truffles, and are looking into making them backyard-compostable.

Alter Eco is very transparent about the farmer-owned coops they source their ingredients from, including various countries in South America, the Caribbean, and India. They not only pay these farmers the Fair Trade premium required by the certification, but they pay 1.3x above that price (they specify that they pay 1.3x the Fair Trade price to their cocoa farmers, which makes me wonder what they pay their sugar, coconut oil, vanilla, etc farmers). The chocolate, however, is manufactured in Switzerland, and in their comprehensive carbon breakdown from their sustainability report, they have no mention of transportation emissions, which made me ding them on transparency, since transportation is a major aspect of overall emissions and true sustainability. Additionally, they are Climate Neutral certified, based on their 100% carbon offsets through reforestry. I was ready to jump on them for offsets, which are not as helpful as they seem, but they’ve solved one of the major issues - which is that offset trees are often planted far from the ecosystems the corporation is depleting - by creating a system of “insetting”, which involves planting trees directly into their supply chain, based on the needs of the communities they work in. Even better, the farmers own the trees that are planted, which may bear fruits that farmers can use to diversify their income even into retirement. In terms of the grass-fed aspect, Alter Eco has a long list of the benefits that grass-fed cows provide the environment, but the science doesn’t seem to have a clear consensus; conventional cows use a lot less land and takes less time to grow per cow, but grass-fed cows are much better for ecosystem health and can even help trap atmospheric carbon dioxide. The jury’s still out on how those cows in Switzerland are helping the Earth.

Alter Eco feels like a really cool brand - their founders describe themselves as “activists at heart”, and for a brand that is large enough to stock in retail giants like Fred Meyer, Walmart, and Target, they mention their focus on social justice quite a bit. And, maybe I’ve fallen to their marketing scheme, but they seem genuinely interested in the consumer’s well-being, speaking in a friendly tone and staying transparent about the brand and its progress. In their FAQs, they have statements on caffeine levels, GMO use, and even details on the traces of heavy metals in their chocolate (which is found in all chocolate, but is rarely mentioned), which make me excited about their brand for two reasons: firstly, they’re not afraid to explain the ugly truth behind some of their ingredients, even though it goes against what consumer preferences stand for, and secondly, while GMOs may be a hot consumer topic, heavy metals definitely aren’t, and they went out of their way to educate consumers on it even though it may hurt their brand. They’re also a B-Corp, which means they meet relatively high standards for environmental and social factors - basically, it means they’re doing a lot of good for the world and not just turning a profit; and within the community of B-Corps, they’ve scored in the top 10% of companies their size for the past three years. They have a score of 133.8 (out of 200, based on impact to all stakeholders, mission, processes, governance, etc) with the average B-Corp’s score being 80; B-Corp categorizes 100-150 as Outstanding and 150+ as Extraordinary, though, so they aren’t the SUPER best of the best. Overall, I’m pretty impressed, but their Impact Report seemed to overly highlight their successes, like the B-Corp thing, but not really mention a ton of their issues/failures, so I dinged them for that.