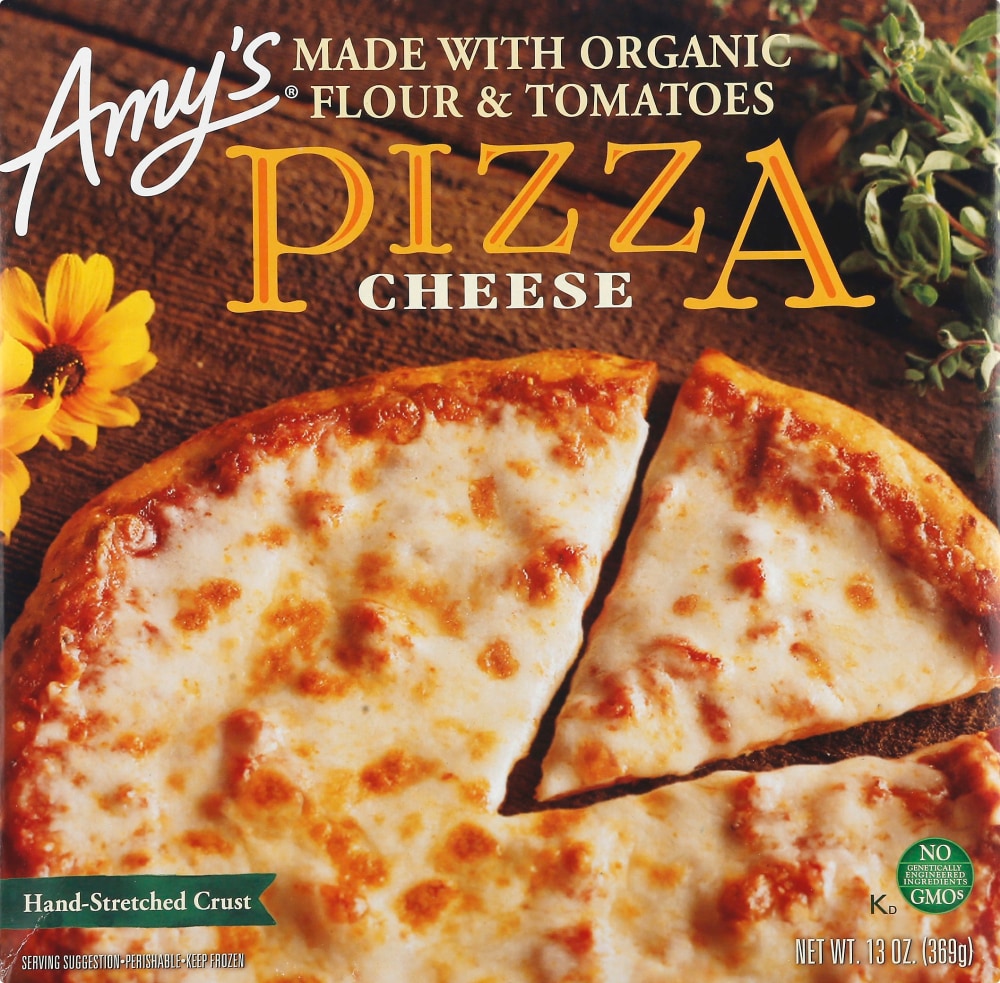 Amy’s Kitchen’s frozen meals were a staple of my childhood and continue to be some of my favorite healthy and easy food options. While I have tried many of their products, I’ve eaten their cheese pizza more frequently than anything else. At $6.69, it is a widely accessible and much healthier choice than many of the alternatives. My family purchases Amy's products explicitly because of their organic and all natural ingredients, but I've often wondered about the planetary impact of companies who sell primarily frozen foods, specifically in regard to packaging and travel. Amy's recognizes that they are not perfect, but their comprehensive foundation on sustainability and their healthily ambitious goals for the future will continue to push them forward.

After taking a look at the ingredient list of Amy’s classic Cheese Pizza, the company’s commitment to sourcing organic ingredients is made abundantly clear. The pizza contains: organic unbleached wheat flour, filtered water, part-skim mozzarella cheese, organic tomato purée, organic extra virgin olive oil, organic honey, sea salt, organic red onions, expeller pressed high oleic safflower and/or sunflower oil, yeast, spices, organic garlic, and black pepper. Organic farming is extraordinarily valuable for several reasons, including nourishing the soil and keeping it healthy for future generations, rather than stripping it of its nutrients through the application of pesticides. It is also safer for the farmers working in the fields, and the consumers who eat the products, as exposure to these harmful chemicals can have significantly negative health impacts. Amy’s proudly describes their reputation for being picky and overly demanding, explaining, “we don’t manufacture food, we cook it with love.” This highlights their extraordinarily important commitment to valuing goodness and health over mass production and profit. They also have a promise to keep all of their dishes free of GMOs, citing their belief that consumers have a right to know exactly what they are putting in their bodies.

Amy’s Cheese Pizza begins with a house-made dough, which resides in the carefully regulated rising room for several days before it is ready to use. This high quality dough is then formed into a hand-stretched crust and topped with house-made organic pizza sauce and a healthy helping of grated mozzarella cheese. The simplicity and hands-on nature of this process is extremely important, as it further highlights Amy’s commitment to small scale production that values the well-being of workers and consumers over profit drive. In regard to packaging, each pizza is wrapped in a thin layer of plastic and placed inside of a recyclable cardboard box. The Sustainability Manager for Amy’s Kitchen does a lot of work with packaging, emphasizing the fact that, despite Amy’s commitment to being fully recyclable, they have encountered some difficulties. While Amy’s production process is not perfect, and there are some limitations and lacking infrastructure, the company is evidently working very hard and heading even further in the right direction.

In 1987, Amy’s Kitchen was founded in Petaluma, California by Rachel and Andy Berliner, and has remained family owned ever since. In the midst of the birth of their new business, Rachel gave birth to her daughter Amy, the namesake of Amy’s Kitchen. The company was founded on the guiding principle of goodness, and the goal of doing things right by their customers, farmers, employees, and the earth. They note, “The right way isn’t always the smart way or the easy way, but it’s the only way we’re interested in.” Through their mission of making affordable and delicious vegetarian food accessible to as many people as possible, they note that cutting down on meat consumption is one of the most powerful things we can do to create a more sustainable planet. Amy’s was also founded as an organic company, far before the official organic certification existed. As a result, the company now works with partners to collaborate on promoting organic and regenerative agriculture, renewable energy, elimination of food waste, fair labor practices, and more.

Amy’s notably became a certified B Corporation in September 2020, signifying that they meet the highest standards of social and environmental performance. In addition to their commitments to organic food, they highly prioritize the well-being of farmers and workers. For instance, after learning that many of their Spanish-speaking employees avoided visiting doctors because of language barriers and concerns about missing work, Amy’s built on-site Health Centers staffed with bilingual doctors. The company also transparently shares comprehensive short term and long term goals, highlighting the genuine nature of their commitment to improving their practices over time. In the short term, they hope to overcome some of their challenges with eco-friendly packaging. Meanwhile, in the long term, they hope to make their food as globally accessible as possible and build kitchens in other areas of the US, and around the world, in order to support a wider range of local farms and decrease their reliance on fossil fuel intensive transportation.