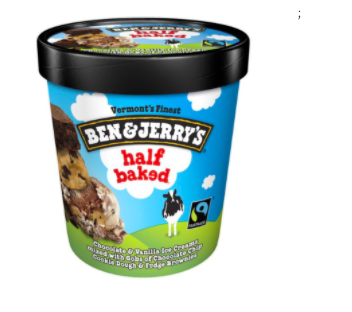 Ben & Jerry’s is known around the world for their classic flavors like Half Baked and Phish food; they are a staple in every family’s freezer. It all started when two counter-culturists, Ben Cohen and Jerry Greenfield, set out in 1978 to create an ice-cream company that was centered around equity and social justice. They have stayed true to their mission even after being purchased by Unilever, known for its massive contribution to plastic contribution. Their social and environmental justice centered business model is central to who they are as a company and that was a crucial aspect in their buyout deal with Unilever. In my preliminary research I was skeptical of potential greenwashing, but I have found that in every facet of the production of their ice cream they push themselves to find sustainable alternatives to traditional means of production. While there is always room for progress, Ben & Jerry’s is always pushing to be a role model for sustainable dairy production and distribution. Overall it is clear that social and environmental justice are central to the business model of Ben & Jerry’s. They are trying to prove that a large company can still operate at full capacity, sending out 1,000,000 pints of ice cream a day, and still be sustainable. While I deeply appreciate their efforts to create a new sustainable norm, I personally believe that our current economic system of constant production is unsustainable, and the future of the economy lies in producing small batches and creating smaller, self-reliant economies. You definitely won’t feel guilty buying your next half baked from the freezer section, but keep in mind that Ben & Jerry’s only represents the beginning of the sustainability movement, not the end.

The base of all Ben & Jerry’s products is cream. They partner with farms that are primarily located in Vermont, just a few miles away from their main factory. They also source dairy from the Netherlands, Germany, and the UK, but the outsourcing of their dairy barely contributes to their environmental impact. After the company conducted a life-cycle analysis of their pint sized ice cream, it was discovered that the production and management of their dairy farms contributes to just over 50% of their overall GHG (greenhouse gas) emissions. The most energy and funds are directed to addressing this problem. One of the many ways that Ben & Jerry’s are trying to reform their dairy production is by implementing regenerative agricultural practices that protect the soil, such as using cover crops, reducing synthetic inputs, and using no or medium tilling in their soil. These practices will help the soil absorb carbon dioxide from the atmosphere. Additionally, Ben & Jerry’s is now working on methods to reduce the methane emitted by their cows. Methane is a greenhouse gas that is 4x as strong as CO2, so it is imperative that it is eliminated from their supply chain. By using separators on their Vermont and Netherland farms, their methane emissions have been significantly reduced. These practices need to ramped up and implemented on all of their dairy farms in order to see the most benefit. Ben & Jerry’s is just as serious about the sustainability of their non-dairy ingredients as they are about their dairy sourcing. Their top 5 non-dairy ingredients: sugar, cocoa, coffee, banana, and vanilla are all fair trade certified. Although these ingredients are not sourced from the U.S, Ben & Jerry’s is hands on in ensuring that their small co-op farmers are creating their goods with the most sustainable agriculture practices. In their corporate sustainability report, the company is continuously trying to increase the sustainability of these products by sourcing them closer to home. Although the ingredients that go into their ice cream are not completely sustainable, they are leading the charge in constantly implementing and accomplishing goals that diminish their environmental impact, and since their is honestly nothing that they could be doing better that hasn’t already been addressed, I feel as though they deserve 2.73 planets.

Ben & Jerry’s is truly an industry role model for sustainable manufacturing and distribution practices. First of all, Ben & Jerry’s offsets its Vermont factory’s emissions through the purchase of carbon offsets, which does not benefit them financially, just the planet. Carbon offsets are just the beginning of reaching carbon net neutrality. Ben & Jerry’s is also on track to use 100% renewable energy by 2025. They also use a machine called the ‘Chunkinator’ which turns bi-products from their cream production into bio-gas that is used to power their manufacturing plant in the Netherlands. Technology like this is really the definition of sustainability. If this technology was expanded and used in all of their factories, this company would really be self sustaining with nothing wasted. In this same vein, Ben & Jerry’s has a goal to have packaging that is compostable, recyclable, or repulpable by 2022. I will be anxiously waiting for their 2020 report to see how close they are to that goal. Not only has Ben & Jerry’s set ambitious goals for themselves, but have short, medium, and long term plans to achieve their goals, which makes me think that it is not just a marketing ploy. Although Ben & Jerry’s is not a completely self-sustaining system, I gave them 3/3 planets because they are looking at how they can make every facet of their supply chain sustainable. They are going above and beyond just setting a 2050 goal that is filled with empty promises. They have attained many of their goals and are always prepared to go even farther in making sure they are not degrading the environment.

Social equity throughout their supply chain is one of Ben & Jerry’s main company values. Let’s start domestically. All of their brownies and cookie dough are from a local bakery in Vermont. They also are the first dairy buyer to adopt the Milk with Dignity Program which ensures that all dairy farm employees work in safe conditions and are paid a living wage. Within their corporate structure, Ben & Jerry’s partners with Race Forward, which is a third party that works with companies to ensure racial equity and inclusion. In their 2019 report, Ben & Jerry’s stated that they did not meet their goals that they set out for, but have a strategy to continue moving in the right direction. I think it is so valuable when a company is open with their mistakes and shortcomings because it makes their entire operation more trustworthy. As I noted before, their top five ingredients are fairtrade certified, which means farmers that they work with abroad are being paid significantly more than the average farmer for their work. Beyond that, Ben & Jerry’s is also helping further social justice causes within those same farming communities.