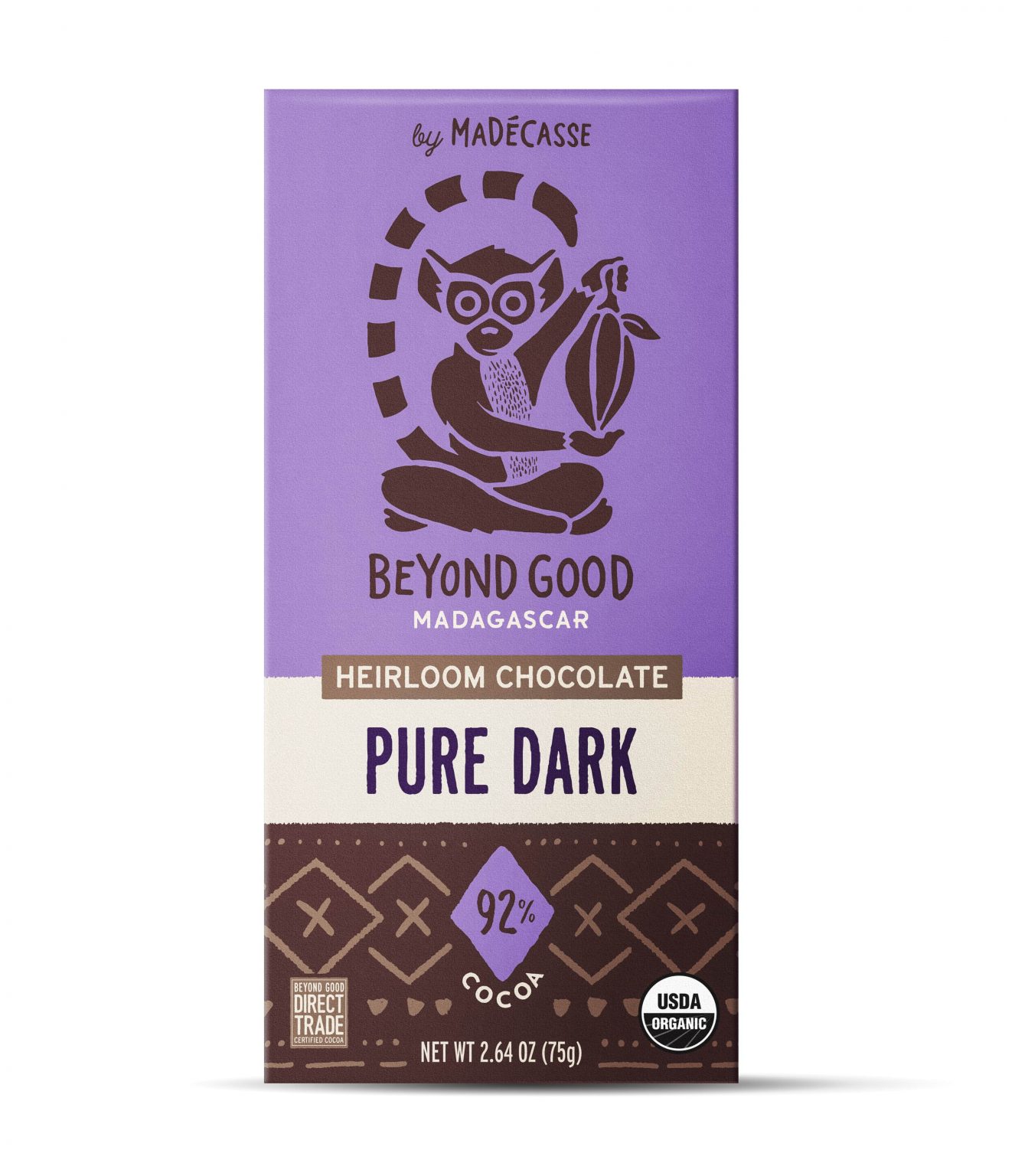 I loved putting this review together. Frankly, I was sick of exploitative Big Chocolate companies (check out my exposé on Nestlé’s MILO®) and hoped to root for an ethical chocolate company. Beyond Good is one of them and definitely lives up to its name. Founded by two Peace Corps volunteers who worked in Madagascar, Beyond Good is a chocolate company based in New York with a mission to improve the lives of cocoa farmers and biodiversity in Madagascar. It aims to make high-quality chocolate in an ethical and sustainable way that uplifts the communities, wildlife, and economy of Madagascar, where its sourced cocoa is grown.

I love how the founders recognize the nuances of the issues plaguing cocoa production such as child labor and deforestation. A main driver of these issues is farmer poverty and many chocolate companies just throw billions of dollars at 3rd-party certifications and aid work which doesn’t solve much. Greenwashing alert! However, Beyond Good aims to tackle poverty at its core through its business model of direct trade with farmers. By cutting out cocoa middlemen who cut into cocoa farmers’ income, it has already mitigated supply chain traceability issues. Furthermore, it can pay farmers a 10% premium above the market price. I’ve also given Beyond Good a high rating because it’s serious about nation-building in Madagascar. It has developed close relationships with grassroots communities and invested over $100,000 USD in local development projects since 2015 such as Whole Planet Foundation, Catholic Relief Services, Conservation International, Bristol Zoological Society, and Wild Returns. Beyond Good’s transparency and accountability also gained brownie points. For example, it has engaged external consulting groups with sociological experts to conduct research into the impact of their activities and even admitted their shortcomings. To quote its founder and CEO, Tim McCollum, “Not just good. Beyond Good. In name and practice. We’ll hold ourselves to it. And we expect you to do the same.” Transparency matters a lot to consumers like me so I really appreciate that Tim! I’ve given a high rating just because Beyond Good actively makes efforts to improve the communities and environment with their business.

While Beyond Good is by no means perfect, and I touch upon this in the sections below, it is a gamechanger and a sweet company — but not too sweet, since there’s more cocoa than sugar in their chocolate. Now that I’ve got my mandatory bad pun out of the way, on to the review!

Beyond Good’s 92% Single Origin Madagascar Pure Dark Chocolate carries all my favorite labels — Certified Direct Trade, USDA Organic, Kosher, Non-GMO, Vegan, Gluten-Free, and Soy Free. Their ingredients consist of organic cocoa beans, organic sugar, organic cocoa butter, and organic sunflower lecithin (emulsifier). These labels are great news for the environment given that organic produce does not involve the use of chemical fertilizers that negatively impact soil health and wildlife. Moreover, a vegan label does not involve any animal harm. What I also love about Beyond Good is that they go out of the way to make their chocolate taste good. Instead of commodity cocoa which most chocolate companies use, they use criollo cocoa, a rare heirloom cocoa found in less than 3% of the world’s chocolate. Apparently, it has fruity notes of cranberry, cherry, and raspberry. Beyond Good also uses the whole bean, which means including the cocoa solids and cocoa butter in their product to reduce waste from harvest.

In terms of packaging, Beyond Good sources its wrappers and packaging from companies headquartered and owned in Madagascar. Specifically, it sources wrappers from Graphoprint, a social enterprise that has provided employment to vulnerable women for 27 years. While it’s great that Beyond Good is so intentional about the companies they work with, I would have appreciated it if it disclosed more details about its packaging. While the external packaging appears to be made from paper, I’m not sure if it is made from recycled materials. I also don’t know if the chocolate is wrapped in aluminum foil, which is unsustainable given its energy-intensive production process.

Beyond Good has incorporated many agroforestry practices in its cocoa farming process. For context, the USDA defines agroforestry as “the intentional integration of trees and shrubs into crop and animal farming systems to create environmental, economic, and social benefits.” One example is training farmers to use low-tillage practices — having minimal disturbance of the soil and its complex systems of soil microbes. This provides healthier environments for crops to thrive and sequesters more carbon. Another is planting shade trees, which serve as homes for endangered local species and are key to wildlife conservation. Beyond Good has collaborated with Conservation International and Bristol Zoological Society to research the link between cocoa trees and lemur conservation. In terms of Beyond Good’s impact, they have planted 3263 shade trees, with 50 endangered species living in their supply chain and 620 acres of organic cocoa under their cultivation. In fact, Beyond Good’s agroforestry practices have led to 5 species of endangered lemurs living amidst their cocoa trees! It’s so nice to learn that cocoa plantations can act as refuges for wildlife. I’d also like to highlight that Beyond Good’s agroforestry training and practices have raised more awareness about climate change and conservation amongst Madagascar’s farming and local communities.

Apart from agroforestry practices, Beyond Good has broken the conventional supply chain model with their direct trade model. Direct trade works by buying cocoa directly from farmers so they can pay farmers more. Typically, cocoa farmers harvest pods and sell them to a collector, who sells them to another collector, who passes them to exporters. Exporters then dry and ferment cocoa to export. Beyond Good allows farmers to dry and ferment cocoa themselves to empower them with skills. Without middlemen, Beyond Good can also pay farmers six times more than the usual rate (approximately $3.80 a day compared to approximately $0.50 a day), which has provided farmers enough funds to save, purchase new infrastructure, and even send their children to school. Notably, Beyond Good has admitted that these farmers have only escaped relative poverty and promises to increase their efforts over time.

More importantly, Beyond Good has a unique bean-to-bar approach — it built a factory in Madagascar near areas where cocoa is harvested. It has also brought cocoa farmers to these factories for training and a transparent overview of the manufacturing process resulting from the cocoa they harvested. I personally like this initiative, as most cocoa farmers have never even tasted chocolate due to the typical exploitative working conditions! Building a factory where cocoa is sourced is significant as it helps break systemic inequalities of global chocolate production. Typically, companies export the value of chocolate when cocoa is sent to manufacturers in Europe and North America. Given local production, Beyond Good has created 14 jobs (now an expected increase to 20 jobs) and improved the nation’s capacity to manufacture its own chocolate. Its bean-to-bar model carries significance as it’s expected to bring a minimum of $1.5 million USD into Madagascar, where unemployment and poverty rates are high and where infrastructure and technical capacity are low. Most prominent to me was how Beyond Good admitted the limitations of their venture. It admitted to its struggles building the factory and how it had to manufacture chocolate in Italy as an alternative. I appreciate its candor and how it tried to make the best out of its situation such as choosing to export its cocoa to Italy rather than engaging middlemen and ensuring that all cocoa exports were from Madagascar.

Moreover, I love Beyond Good’s thoughtfulness regarding certification. It doesn’t outsource their impact to third-party certifications as this doesn’t make sense for farmers. Farmers would have to register as a business with their local government but 99% of smallholder farmers aren’t, along with the high illiteracy rate in rural areas of Madagascar. I truly appreciate how they recognized the issues with certification schemes and decided to take matters into their own hands to create true impact.

Beyond Good invests in building the capacities of their cocoa farmers through investing in their infrastructure to improve cocoa quality, local community development initiatives, training, and awareness-raising programs on wildlife. It has also conducted local surveys with these farmers to gauge employee satisfaction. Overall, its employees were satisfied with their wages and working conditions, namely, they enjoyed their professional development opportunities and felt comfortable with filing complaints. One concern was about the hotter, drier climate which affects cocoa yield and farmers’ livelihood. A recommendation proposed to Beyond Good was developing climate adaptation plans for them.

Of course, there are dissatisfied employees who expressed concern over cocoa price instability, which has led to their decreased wages and unstable income in 2017-2018. Employees of the plantation supplying Beyond Good have an average salary of $33.75 USD per month, which sounds good relative to some farmers’ pay of $11 a month. However, it still does not meet the minimum wage of $39.00 USD for Madagascar’s agricultural workers. The plantation claims that employees can meet their basic needs despite these wages given their non-monetary employee benefits such as land ownership for supplementary farming, covered medical expenses for their families, road repairs, cash advances, and loans. Perhaps they can meet basic needs, but I also believe in providing higher wages as this empowers them with their own spending choices. This could be an area Beyond Good can look into for improvement. Pain points aside, I do acknowledge Beyond Good’s genuine efforts to tackle such long-existing systemic problems plaguing cocoa farmer labor and look forward to reading about their future progress.