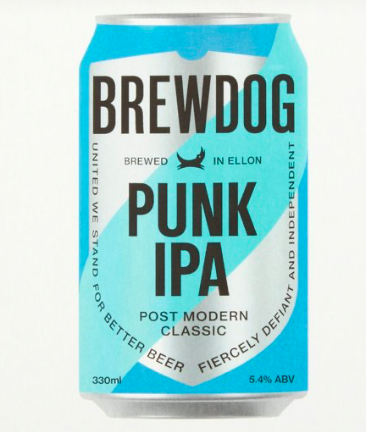 Over the last decade, Brewdog has meteorically developed from a niche Scottish brewery into a market leader in the craft beer industry, and also into one of my favourite breweries. This market leadership hasn’t simply been reflected in Brewdog’s numbers, but has been epitomised by their continued drive to achieve carbon negative production, and innovate their supply chain. The success of this ambition can be recognised in their B-corp certification, as well as a long awards list, including Best Sustainable Pub company in the 2021 Publican Awards. As a naturally skeptical person, such a seemingly perfect record intrigues me, and is what lead me to reviewing their highest revenue generating product; the Punk IPA. In general, my skepticism was largely misplaced, as Brewdog truly is aggressively attacking their carbon footprint in every part of their supply process. Moreover, the transparent data and analysis presented in Brewdog’s annual reports shows a high degree of accountability. However, recent news has made clear that the rapid growth of Brewdog has potentially come at the expense of adequate safety measures and work culture, raising questions as to the legitimacy of Brewdog’s promised commitments. However, despite such blips, the numbers don’t lie, and consumers can’t go wrong by choosing to buy one of the world’s only carbon-negative beverages this summer.

Punk IPA, like the majority of other beers, is made out of water, malt, hops and yeast. This is an extremely simple combination of ingredients, which Brewdog transparently emphasises on their recipe website. In fact, they are so transparent that they will happily share the hop composition of the IPA in painstaking detail for consumers to replicate at home. This is an attempt to encourage home brewing and inherently reduce transport miles and carbon footprint. Moreover, Brewdog sources 90% of its hops from the Yakima plains of Washington where Brewdog partners with multiple local suppliers. These suppliers, such as Yakima Chief Hops, engage in the Sustainable Agriculture Initiative, ensuring the supply process minimises carbon footprint. Although this sounds excellent, I believe there can be improvement here. Like any centralised supply chain, massive amounts of transport are required to move the hops to breweries. If Brewdog instead sourced hops locally to breweries, long-haul transport could be minimised, leading to a reduction in transport emissions.

If you thought my criticism of Brewdog’s hop sourcing was a nitpick, my criticisms of their malt supply chain are even more tenuous. Although the Punk IPA is made with local and organic malt, Brewdog has recently launched the ‘Lost’ Lager, which utilises surplus bread as a partial substitute for malt. This is an extremely innovative recycling technique that could be applied to the likes of the Punk IPA.

Evidently, my criticisms make Brewdog a victim of their own sustainability successes. However, I simply have to admire the intuition and motivation behind their packaging. Punk IPA cans are made of fully recycled and recyclable aluminium cans, with Brewdog having stated that they often use wasted Coca Cola cans for their drinks. Equally, Brewdog has cut out all plastic in its multipack packaging since 2018. What is more impressive is the Cans for Equity program that Brewdog runs, which incentivises consumers to return 50 used Brewdog cans in exchange for shareholder benefits such as discounts. Ultimately, Brewdog doesn’t just ensure their production is eco-friendly, but also encourages its consumers to be part of it, which in itself warrants a strong planet score.

Unsurprisingly, Punk IPA also has a very similar production process to the majority of beers, with the key steps being mashing, lautering, boiling and fermenting. Naturally, most of these steps require considerable electricity usage, which Brewdog sources almost entirely from wind power, with 2.4MegaWatts of energy being produced by 3 turbines next to the brewery in Scotland. The fermentation process also creates a lot of waste products such as malted barley and water. Yet again, Brewdog has actively tackled this in order to minimise waste by developing an anaerobic digestion plant for waste water, which is in the process of gaining planning permission. However, with carbon dioxide being the largest by-product of the brewing process, I argue that Brewdog could be doing a bit more. Although they partake in tree-planting programs and have attempted to optimise their production process, this is a matter of carbon offsetting, where their annual report isn’t clear in how they have managed to reduce their emissions by 54,622 tonnes for the year. However, with a CO2recycling plant on the way, it is evident that Brewdog are already in the process of improving this system to truly achieve carbon reduction. The final production step of transportation is another one of Brewdog’s strengths, with Brewdog having famously paired up with Gregory Distribution to trial the UK’s first all-electric fleet of refrigerated vehicles in London. Although the production of such vehicles is resource intensive, they are highly efficient, have a long-lifecycle, and produce no harmful emissions. Ultimately, it’s clear to me that Brewdog take the sustainability of their production processes extremely seriously.

Despite Brewdog clearly taking accountability of their ecological and carbon footprint, the work culture at Brewdog has repeatedly been questioned in regards to its commitment to equality, climate action and progressive values. Brewdog has had its fair share of controversies, especially when regarding gender equality, as their “beer for girls” campaign was heavily criticised for its sexist undertones. Moreover, a recent open letter by ex-Brewdog employees has expressed the “culture of fear” at the company, which left many employees in poor mental health. Evidently, this suggests that although Brewdog is environmentally sustainable, they have a long way to go in order to foster a socially sustainable work culture. However, even their eco-friendly policies have come into question, with ex-employees claiming that Brewdog frequently charters private planes, brews with glacial water, and dumps all waste water down the drain. Naturally, this is quite damming evidence, and might suggest that Brewdog’s impressive promises are in fact fictitious.