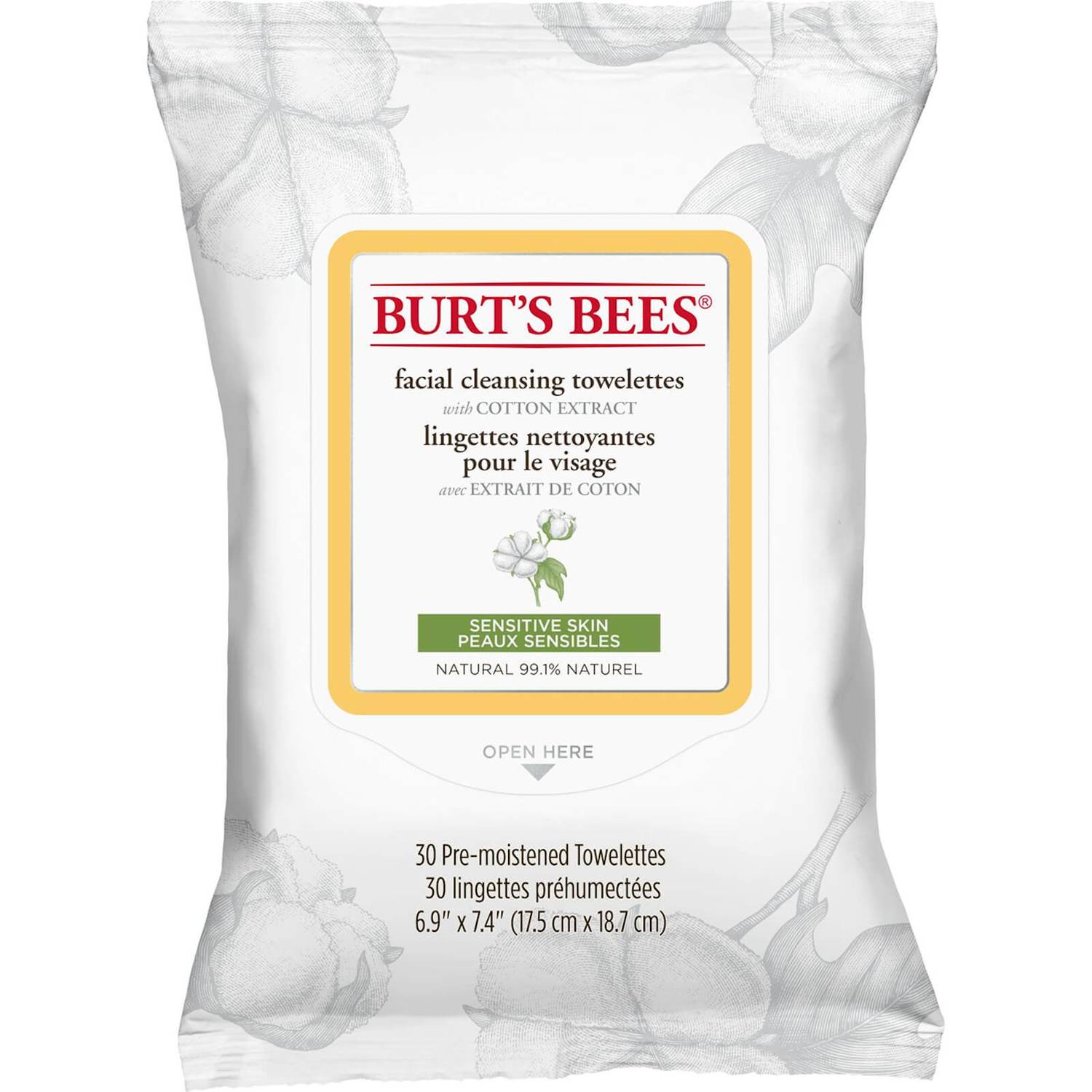 Burt’s Bees Facial Cleansing Towelettes contain 30 hypoallergenic towelettes that remove dirt, oil and makeup, while moisturizing and soothing skin, without rinsing or scrubbing. The product is suitable for sensitive skin, and it is just above 99% natural. The company is clearly making an effort to be sustainable, to benefit the nature and to give back to communities. Burt’s Bees has had amazing results through their initiatives, and it is still trying to be better and progress further. However, unlike most Burt’s Bees products, the towelettes have more complex ingredients lists, and I would want the company to provide more information about the ingredients it is using, so that the consumer can better understand what they are, where they are from, and how it benefits them.

The product is made of Forest Stewardship Council (FSC)-certified natural fabric, specifically from repurposed cotton tees. The product is presented as containing cotton extract, which is the fourth ingredient on the list (Gossypium heraceum flower extract). It is a moisturizing, soothing ingredient, which enhances skin hydration, is rich in vitamin E and powerful antioxidants and contains fatty acids. The third ingredient on the list is Aloe Vera (Aloe Barbadenisis Leaf Juice), which is a great moisutirzing agent with anti-bacterial and anti-inflammatory properties. The towelettes are formulated without fragrance, parabens, phthalates or SLS. Moreover, the package has a sticker rather than a plastic closure, as the company is trying to avoid over-packaging. Burt’s Bees does not test its products on animals, so that the products have the Leaping Bunny Seal and the “cruelty-free” stance on packaging. The company says it sources materials responsibly, and I would want more information about where the ingredients are sourced from to be available. However, Burt’s Bees is using nearly 1000 ingredients from more than 100 countries and it is investing in traceable, transparent and resilient supply chains, to ensure they are supporting the communities. I think this initiative is amazing, and I would love to know how Burt's Bees will give back to communities once it achieves this.

The company uses an average of 52% post-consumer recycled (PCR) plastic. Burt’s bees operations are landfill-free, as the company has kept its operational waste out of landfill since 2010, diverting everything into compost bins, recycling centres or waste-to-energy facilities. Furthermore, the company has been carbon-neutral certified since 2015, invests in solar energy, and offsets annual water consumption through watershed restoration projects. I think that this is amazing, as it shows the company is committed to its goals and values, making a real effort to stick to them, by contiunously improving crucial parts of the manufacturing process. Burt’s Bees has also partnered with TerraCycle to create a recycling programme, where recyclables are collected, packaging is cleaned and melted into hard plastic that can be reused. Customers are given points which can be redeemed in the form of charitable donations. This is also great, as it contributes to a circular life-cycle of the products, and therefore reduces waste. The company’s goals for 2025 focus on reducing virgin materials, investing in U.S. recycling infrastructure, and I believe that these are achievable, as the company has shown it is striving to be better, and has already has great results.

Burt’s Bees was created by Burt Shavitz and Roxanne Quimby in the early 1980s. Burt taught Roxanne about bees, and the two of them started turning surplus beeswax into candles and lip balm. They both valued simplicity and connection to nature, so that the company prioritizes protecting and preserving nature. However, the company is now owned by the Clorox Company, which has recently made progress in terms of sustainability, ranking no. 11 on Barron's list of the most sustainble comapnies in America, and no. 33 on Newsweek’s 2021 list of America's 400 Most Responsible Companies. Moreover, it developed the IGNITE strategy, through which it plans to innovate and grow, while prioritizing the ESG goals. Burt's Bees has remained authentic, as it continued to progress, and some of its practices were even adopted by its parent company. I believe that it is great that Burt’s Bees was able to remain true to its original values and to have a positive impact on a larger company, too. In 2007, the Burt’s Bees Greater Good Foundation was established, which is a non-profit organization dedicated to sustaining charitable, grassroots, initiatives that support human and honeybee health. Some of their current partners are E.O. Biodiversity Foundation, which is concerned with conservation and preservation of the natural world, Alliance Medical Ministry, which aims to provide affordable healthcare, Habitat for Humanity, which aims to provide homes and end the cycle of poverty, etc. This shows which causes Burt's Bees supports, and their page goes into detail on what exactly the company has done to help. Overall, the company is doing great, but it recognizes there's still room for improvement, which I love.