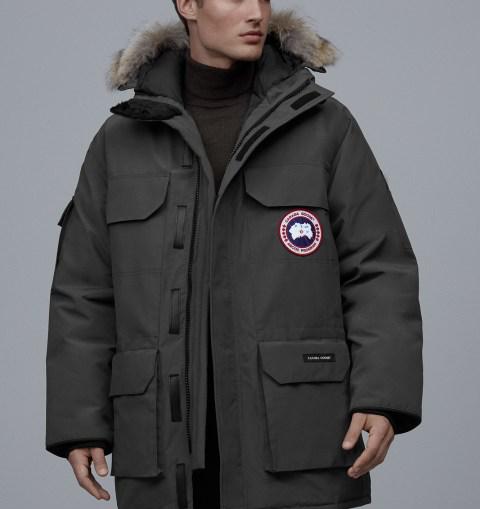 The Canada Goose Expedition Parka is a luxurious outdoor jacket originally designed for people who live in extremely cold weather, but in fact, it has been marketed to the general public across the globe. When I first came to Boston for college, everyone told me that a Canada Goose jacket is a must-have and soon I found out that when winter comes, everyone walks around with either Canada Goose or Patagonia. I have to admit that I did benefit from owning a Canada Goose because the goose down used to fill the jacket can keep me warm and comfortable, while the coyote fur ruff with a shaping wire can stand firmly against the harsh winds of the Bostonian winter. However, later I realized that there are many other jackets that can do pretty much the same job but are less luxurious and more sustainable since the warmth that Canada Goose provides is at the cost of cruelty. Even though Canada goose has promised to make some big changes by 2025 such as moving to 90% of PFMs and 100% of reclaimed fur, their Parkas are extremely unsustainable and I’ll remain skeptical to closely observe further improvements made by the company.

Canada Goose Expedition Parkas are framed with synthetic fabrics such as polyester and nylon, where the inside is filled with goose and duck down. The hoods usually have detachable wild coyote fur trimmed around a shaping wire which promises warmth and stability. First of all, polyester and nylon are both manufactured synthetic fiber, which is essentially a kind of plastic derived from coal and petroleum. Since coal and petroleum are both non-renewable resources, polyester and nylon generally have significant negative impacts on the environment. According to the Council of Fashion Designers of America (CFDA), while there are some advantages of polyester such as durability and resistance, polyester sheds small pieces of plastic called microplastics every time it’s been washed. These microplastics will soon fill our water and air, eventually get ingested by marine life, animals, and even us, causing irreversible damage and increasing cancer risks. Besides the fabric, one major issue with Canada Goose Expedition Parkas is that the coyote furs are gathered directly by leg-trapping and peeling wild coyotes. Ironically, the company’s sustainability report claims that “the fur that we do use is acquired in the most humane ways and we adhere to the guidelines of the Fur Council of Canada that governs fur use in our country.” In fact, they refuse to recognize the cruelty and harm caused by their procedure. Once trapped, coyotes die from trying to free themselves as well as dehydration, blood loss, and hypothermia. They can become so desperate that they eventually chew or twist off their own limbs to escape. In addition, FurBearers.com noted that the “Fur Council of Canada” is simply the marketing body of the fur industry of Canada thus has no legal authority. As for the down, geese, and ducks whose down have been used to make the Parkas are from animal farms where trap them for their whole life and stuff them with fodder and hormones. The only sustainable point with animal furs and downs is that they are biodegradable and resolve faster than polyester and nylon, but this cannot compensate for cruelty.

The production process of Canada Goose Expedition Parkas demonstrates a certain level of attempt to be sustainable, but they have a long way to go. The factories where those parkas are manufactured are all based in Canada, with a total number of 4591 workers in 2020. According to their sustainability report, they had eliminated single-use plastics in all facilities by the end of 2020. To keep electronics out of the landfill, they partnered with Lifespan Technology and eCycle Solutions to collect and recycle no-longer-used electronics, such as Laptops, cell phones, and copper data cables. However, this seems like a minimal effort since electronics are hardly involved in the production process, and the most significant parts of production are not even mentioned. In addition, their official website also claims that the contractors and manufacturing factories all comply with the company’s Supplier Code of Conduct, which sets out standards for working conditions and environmental responsibility. Nevertheless, this conduct has been proven not useful enough to protect workers from unfair situations. During the pandemic, many workers (mostly immigrant women) have accused the company of racial discrimination, wage discrimination, and failure to provide a safe and sanitary working environment, which clearly violated the conduct but persisted for a while without notice. Furthermore, although Canada Goose emphasizes that no endangered species are used in their production, the traps that they set in the wild are indiscriminately affecting all animals, which means even endangered species can get hurt and killed in the fur collecting process even though their fur is not finalized to be sold.

In recent years, sustainability attracts more attention, Canada Goose Inc. became aware of their responsibility to the environment and promised to change. In 2019, the company has invested in projects that reduce greenhouse gas emissions and began working with third-party firm Carbon Zero to develop a strategic, long-term offset project to reduce carbon emissions. Moreover, they made an announcement to source more preferred fibers and materials (PFM) into the supply chain, such as recycled or organic fibers. Some actions listed in the long-term goal that has been fulfilled as of 2019 including measuring and publishing their carbon footprint for Scope 1 and 2 greenhouse gas emissions and achieving carbon neutrality. In 2020, the company publicly announced the decision to shift from new fur to reclaimed coyote fur which is returned to a condition where they can be reused for fur brims on Canada Goose jackets. Introducing reclaimed fur into the supply chain, they aim to meet the goal of ending the purchase of new fur by 2022. With the announcement, the new Expedition Parkas they manufacture in the future will use recycled nylon, undyed fabric, and reclaimed fur, which requires “30% less carbon and 65% less water to produce”. However, I remain skeptical towards the company’s various commitments because Canada Goose has a history of PR double-sidedness, and words are just words. I look forward to seeing some real changes that Canada goose can bring to the entire market in the near future.