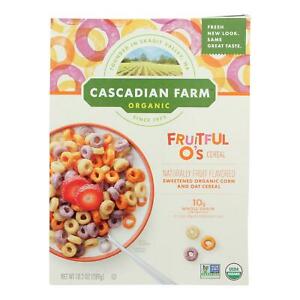 Serving as the organic counter part to Froot Loops, Fruitful O’s does not disappoint with its ingredient list and its partly post consumer used packaging. Each of the main ingredients is supposedly 100% sustainable sourced, though I would like to see more detailed criteria that describes what General Mills considers “sustainably” sourced. Additionally, General Mills should be given positive feedback for their detailed plans on water protection, green house gas emissions, regenerative agriculture, and human rights, though these goals need to have more precise steps on how to achieve them and General Mills should be held accountable for achieving these goals. The packaging is somewhat deceptive to the consumer, but I think that this can be fixed rather easily, though it should be done as soon as possible for integrity reasons. We should not congratulate General Mills yet, but rather continue to push them towards more ambitious and equitable climate feats and hopefully realize sustainability for this food industry titan. In the meantime I would save Fruitful O’s for special occasions or as alternative to more destructive cereals, but before recommending it whole heartedly I would like more details on Cascadian Farms operations, rather than making judgements based on General Mills as a whole.

The ingredients inside of a bowl of Fruitful O’s are whole grain oats, corn meal, cane sugar, tapioca syrup, oat fiber, wheat starch, sea salt, sunflower oil, color (elderberry concentrate, carrot concentrate, pumpkin concentrate, annatto, apple concentrate), natural flavor, dextrose, and vitamin E; the product is also certified organic by the USDA and verified by the The Non-GMO Project. This is a benefit of the Fruitful O’s since organic farming typically requires significantly less environmentally taxing pesticides and herbicides. Additionally the colors for the cereal are from natural sources, such as elderberry and pumpkin, which means that the coloring will not have a negative environmental impact. In addition, the product is packaged in a cardboard box that is 100% Recycled Paperboard Certified and the cereal is packaged in a plastic bag that can be recycled for store drop off. However, after investigating the store drop off recycling policy, I am unsure of how much is actually being recycled. The website for assistance with this recycling program was backed by numerous large corporations and conglomerates, like McDonalds and P&G, so this may be a more ostentatious attempt to convince consumers to continue to buy the product as is. Additionally, Cascadia Farm is owned by the food giant General Mills, a company whose net worth is billions of dollars. I was pleasantly surprised by General Mills eighty page sustainability plan that discusses work place safety, climate impact, sustainable sourcing, water protection, and racial equity. General Mills hit its 2020 goal of “sustainably” sourcing its top ten ingredients which includes the oats, corn, and sugar cane used in the Fruitful O’s. General Mills defines sustainably sourced mostly on the basis that their suppliers are making continuous environmental improvements compared to the standard. They also received an A rating on climate change awareness and action from the Carbon Disclosure Project. Both of these are wonderful steps in the right direction, and General Mills should be congratulated for their efforts, however, I think that the sustainability goals for sourcing could be more stringent than just outcompeting business as usual, and that the plastic bag packaging could be replaced by a compostable alternative, or another method that avoids the use of the single-use bag.

After some researching I was unable to find the exact process of how Fruitful O’s are made, so this assessment will extrapolate based upon General Mills producing standards and their future goals. After all of the raw materials are gathered and processed, which requires a great deal of water and green house gases, the cereal is put together in a factory and prepared for shipping. All of these processes involve a large amount of electricity and fossil fuel, however, General Mills has pledged to become run by 100% renewable energy by 2030, with biogas regeneration plants and wind projects under way. It has worked with the Rainforest Coalition and the World Wildlife Fund to help audit improve climate negatives along its value chain, and has pledged to have net zero emissions by 2050 across its entire value chain. In addition to this General Mills has committed to advancing regenerative agriculture, or agriculture that builds soil health and ecosystem resilience, on 1 million acres of farm land by 2030. Cascadian Farms itself has pledged $750,000 to the Nature Conservancy to assist in restoring the Sacramento Valley watershed, through recharging ground water and low tilling practices. While these environmental strides are definitely steps in the right direction, I wonder if the food giant could be doing more in the climate fight. With such a drastic presence in the
food world, General Mills, owning large brands like Cheerios, Haagen-Daaz, and Pillsbury, has the ability to onset top-down change, and I believe that the goals they have set are certainly better than average, but that they could also be more ambitious.
General Mills also has a large focus on worker health and benefits. In the United States, workers are offered paid life insurance, dental and health benefits, flexible schedules, and during the COVID crisis General Mills worked closely with employees to ensure not only their physical safety but also mental health was prioritized. General Mills directly asked workers which form of compensation they preferred for the hectic COVID spike in grocery demand for working overtime. General Mills also has a commitment to increased racial justice by actively working to diversify their work place. While their numbers are slightly higher than national averages in the US, all positions are still predominately white and upper level management positions tend to be held by males. It is wonderful that General Mills is making strides to increase work place diversity, but there is still more work to be done.

Despite being pleasantly surprised by General Mills sustainability strategies, in addition with those of Cascadian Farms itself, I was left with some questions. Firstly it was difficult to find any information about Cascadian Farms working conditions and as such they were based on extrapolations from General Mills working environment. I would be curious to know more about what Cascadian Farms is doing to support its workers, and about efforts to cover benefits, offer a living wage, and fight for racial equity. I also felt somewhat mislead by the packaging of the cereal. I started eating Cascadian Farms cereal because it did not include a lot of highly processed ingredients that most breakfast cereals do, it is made with organic ingredients which is usually less taxing on the Earth, and the farm was founded right in my backyard, Skagit Valley WA. The messaging from Cascadian Farms is definitely one of local and small business. Consumers are supposed to feel as if they are backing their neighbors, but it serves as somewhat of a puppet for General Mills; there is no General Mills logo on the box, and it is only acknowledged in small text on a side panel of the box. I thought that this was odd and also deceptive, making Cascadian Farms seem to be a local and down to earth establishment even though it is owned by one of the largest food conglomerates in the world. To alleviate some of my suspicions, General Mills would need to be more upfront about which products fall under its control. This transparency not only allows consumers to make more informed choices, but it also gives General Mills leverage to show that they are investing in organic products, among other projects that give back to the Earth. Again, the sustainability outline was very holistic but some of the goals seemed to have unclear steps for success. I would like to see a more pinpointed outline that shows step by step how General Mills plans to reach the goals that it has pledged. I think that by having more transparent labelling, more precise actions on how to achieve their goals, and more ambitious goals would make General Mills a greater weapon in the fight against climate change and food insecurity, and would certainly up their planet rating.