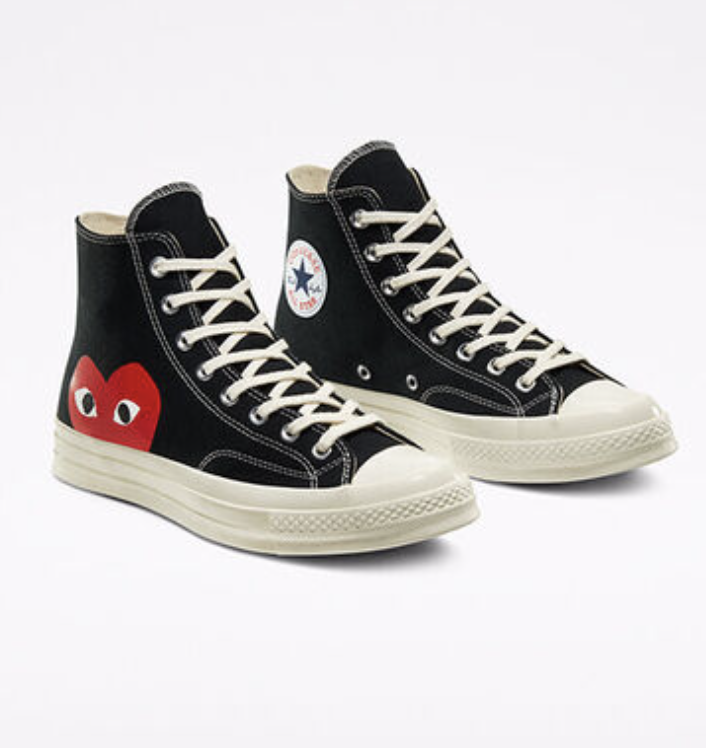 Converse is an American Shoe company that sells footwear and apparel. It was founded in 1908 by Marquis Mills Converse and since 2003, it has been a subsidiary of Nike. Converse frequently collaborates on special edition product releases with other brands such as Comme des Garcons. The CDG Converse shoes has been a very popular product and cost £130/ $178 US dollars.

The brand has not shown any interest towards sustainability and their ethics. Converse needs to make more of an effort to be transparent and honest to their customers since there is a lot of information missing regarding how their products are made and how their workers are treated.

The Converse website was not clear regarding what their CDG Converse were made of. They only stated the fact that the shoes were made of organic canvas and rubber. Organic canvas indicates organic cotton was grown using methods and materials that have a low impact on the environment. However, there is no proof whatsoever that Converse uses organic cotton in their products. This shows how dishonest the company is to their customers and clearly demonstrates ‘greenwashing’ (making it seem like the brand is interested in protecting the environment). The cotton is grown in the southern parts of the US such as Alabama and Georgia and is then collected and shipped to factories in India and China. The number of raw materials coming from different countries indicates the high amount of greenhouse gases emitted when materials are transported across the world to manufacturing factories. Furthermore, canvas requires a lot of water to be manufactured. It takes approximately 2200 gallons of water to make a pair of shoes, whilst for synthetic rubber, used for the sole of shoes, 55 gallons of water are needed.

Additionally, the raw materials used, such as rubber, are sourced from Thailand, Malaysia ,and Indonesia. The rubber used for converse shoes is an unsustainable material as they are made from petroleum by-products and are treated with chemical compounds. This is an unsustainable material because rubber has long lasting impacts on the environment such as water pollution, which harms many ecosystems.

Also, the majority of Converse shoes are made from polyester which are manufactured in India and China. The production of polyester requires a lot of energy and, therefore, a lot of fossil fuels, which is a non-renewable resource. This is damaging to the environment since it is a finite resource. In addition to this, a lot of greenhouse gases are emitted during the process.

Converse has a wide range of colours and designs in their products, but the process to produce these designs is unsustainable. Synthetic dyes are used in the CDG Converse which has many devastating impacts on the environment like many chemicals flushed into rivers, impacting the water systems of the planet.

Yet again, Converse is not transparent regarding how their products are made, clearly showing how untrustworthy they are as a brand.

During the manufacturing process, the Converse shoe is heated to around 170 degrees Celsius/300 degrees Fahrenheit in a vulcanizing oven. This requires a large amount of energy in order to generate a lot of heat. This is an unsustainable process since the energy required comes from fossil fuels that leads to the burning of coal/oil which contributes to the worsening effects of greenhouse gas emissions. Also, the heat required for vulcanizing the rubber sole may melt nylon fabrics. This can lead to the production of black smoke and hazardous fumes, endangering workers’ health and the surrounding environment.

Converse shoes are made in developing countries such as Indonesia, China, Taiwan, India, Thailand, Pakistan, Vietnam, and Malaysia because labour is cheaper. Up until Converse declared bankruptcy in 2003, all of their shoes were made in the US. Then, when the company was bought by Nike, all of the manufacturing moved outside the US where labour is cheaper. Since Converse is owned by Nike and Nike is known for their unsustainable practices and lack of transparency, there is very little information about how their workers are treated and if Converse is following policy regarding forced labour. For example, there is no evidence the brand ensures payment of a living wage in most of its supply chain. Converse discloses policies to protect suppliers in its supply chain from the impacts of COVID-19, but not workers.

Furthermore, there have been reports showing that factory employees are not being paid a living wage. There has also been evidence that two-thirds of 168 worldwide factories producing Converse products do not meet Nike’s standard for contract manufacturers such as supporting responsible sourcing of conflict minerals and meeting the requirements for the health and safety of workers. Employees have reported abuse in the workplace in the form of both verbal and physical assault.