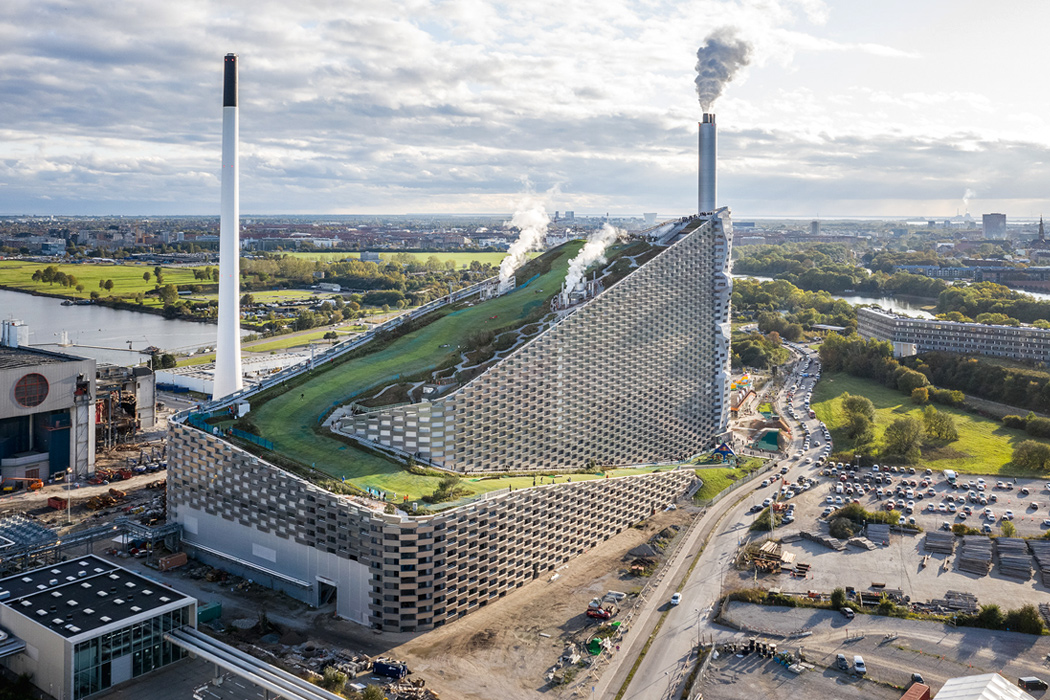 Power plants are not usually thought of as fun, lively places, but CopenHill proves that wrong. Not only does this waste to power plant convert the city’s municipal waste into electricity and heat the city’s water, but people can come to ski, hike, run, rock climb, or simply enjoy a meal at the restaurant at the top of the structure. CopenHill is an example of how communal urban spaces can exist in unconventional areas, and we do have the technology to make it safe and sustainable for the community. With CopenHill open, folks do not have to travel to other countries to ski, and it eliminates another park or recreational facility from taking up space in an already dense city. It’s quite interesting that the factory-like structure can have so many functions and also aims to improve the lives of the surrounding residents. CopenHill, a key part of getting Copenhagen on track to becoming carbon-neutral by 2025, proves that we are capable of creating urban spaces that can be beneficial for the environment and also bring joy into our lives. However, it is important to acknowledge that CopenHill does emit carbon dioxide, and energy recovery is only the one step up better than having landfills on the hierarchy waste management. Prevention, reducing use, and recycling are still better for the environment. While CopenHill is an accomplishment, we need to remember that these structures should not encourage us to have even higher energy consumption and produce more waste. I question whether waste to power plants like CopenHill will only encourage more waste to be produced in order for the facility to function properly. After doing more research, I discovered that Denmark does not even produce enough waste to feed the power plant, but they are taking more waste from abroad, which doul be helpful. However, in times where environmentalists and activists are pushing for more transformative strategies, having a waste to power plant that produces carbon dioxide might not be the best solution to put up on a pedestal.

CopenHill is a waste to energy plant, meaning that Copenhagen’s rubbish can be converted into heat and power. The structure is composed of aluminum bricks that are stacked together to create a blocky facade, but the skeleton underneath is concrete, covered with a steel superstructure. These two elements support the aluminum blocks, the heavy machinery inside, and the interior. In between the giant stacked bricks, there are glass window panels that allow the inside of the building to illuminate light, and during the day time, natural light can filter in. Because the machinery is arranged in height order, it forms the slope like structure, making a 1,476 foot long slope perfect for skiing! The green material that tops the slope is called Neveplast, commonly used for artificial “dry” skiing slopes. By using Neveplast, CopenHill does not need to bring in artificial snow, and the Danish residents do not have to travel somewhere else to ski during the holidays, therefore decreasing their carbon footprint. Underneath the Neveplast is soil, with real grass grown, mounted to concrete slabs, which helps to cushion the skiers’ falls and the assist with the water drainage. The ski terrain is about 500 meters long, and underneath it are furnaces, steam, and turbines that can convert 440,000 tons of waste annually into enough clean energy to deliver electricity and heating for about 150,000 homes. In addition to the skiing slope, there is a 490 meter hiking/running trail lined with trees and gardens, as well as an 85 meter high rocking climbing wall. On the roof top, visitors can find a restaurant and more fitness facilities. The structure is definitely metal heavy, and extracting metals from the Earth can have problematic consequences. The use of the concrete, steel, glass, and aluminum produces a lot of green house gases, which is contradictory to what the structure stands for. Especially with the massive size of CopenHill, a large amount of raw materials were probably used to assemble it. I feel like the intentions for CopenHill were great, but it was branded to be so much more sustainable than it actually is. In addition, most people won’t know what goes into making a huge structure, or what “waste to power” means, so as a result we become less critical.

As mentioned above, the aluminum bricks that are stacked together wrap along the exterior of the structure. Those bricks also act as planters to bring more greenery to the facade. To get to the top of the skiing slope, visitors take the an elevator that faces the interior of the power plant, so they can see the inside machinery and also office spaces set aside for educational workshops and conferences. It might be counter intuitive to build a power plant so close to the city, but CopenHill does not pose as a health hazard because the facility burns much cleaner than the one it replaces. The plant will “reuse 90% of Copenhagen’s metal waste, recover 100 million liters of spare water through flue gas condensation, and reuse 100,000 tons of bottom ash as road materials.” While the facility does emit CO2, it will be the cleanest and most efficient waster to energy facility in the world. Compared to the coal-powered plant that existed before Copenhill, it will cut 107,000 tons of carbon dioxide emissions annually. It will also reduce nitrous oxides emissions by 85% and the sulphur content of smoke by 99.5%. Along the roof top and trail, plants and trees were planted. The trees were anchored to the roof with a separate system, independent from the main steel structure, and are prevented from sliding down the slope by anchored concrete blocks and steel. Many species of bushes and flowers were also planted in a substrate soil material with crushed tiles to create the surrounding meadow. Large structures like Copenhill definitely take a lot of man power, heavy and large machinery, and transportation to bring in supplies and workers. I was unable to find information on how construction workers were treated during the building process, or whether sustainable building practices were used on site, such as using renewable and recyclable materials. Because of the lack of this information being available to the general public, I cannot give a high rating. When the plans for CopenHill came out, every architectural website raved about how innovative it would be, but no specific information about the process actually worked prevents regular people from giving input and evaluating it themselves.

The architectural firm that pioneered CopenHill is BIG Builds, run by Danish born architect Bjarke Ingels. The company is based in Copenhagen, London, New York, and Barcelona and is involved in a number of projects all across Europe, Asia, the Middle East, and North America. BIG aims to create spaces that hit the middle ground between pragmatic and utopia, and they are always considering the impacts on daily living for leisure, working, playing, and parking. Ingels often talks about “hedonistic sustainability,” which means being environmentally aware and friendly in a way that still improves the quality of human life and enjoyment. He believes that BIG’s goal is to “recontextualize how we understand sustainability in the the built environment in order to remove the sense of fear or obligation from its current meaning.” In most places, waste or power plants are avoided, and only the less fortunate are residents there. In contrast, CopenHill attracts visitors to take advantage of their many facilities and create a community of folks that enjoy the outdoors. Modernism has allowed for new technologies that often allow humans to create urban spaces and buildings that regulate their own environments independent of the site’s naturally occurring climate. In contrast, Ingels hopes to utilize those technologies in a way that can compliment the region's climate, reduce energy consumption, and allow urban cities to coexist with nature. BIG's completed projects have been known to be sustainable in the architectural world, but I would like to see more transparency and explanation as to why their building materials are not aligned with their sustainability mission. Architecture greatly influences how communities live, and citizens should be allowed to be critical of how buildings are made how and the environmental impacts of them.