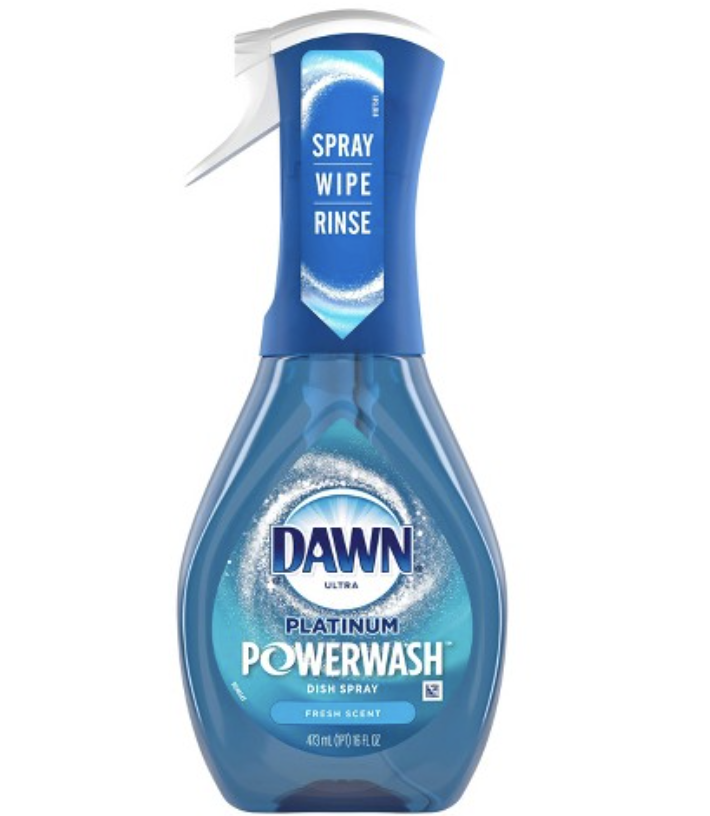 Many of us associate Dawn with their contribution to “saving wildlife” after oil spills. In reality, this company's reputation is extremely greenwashed. While Dawn may effectively remove crude oil from animals' fur, the “grease cutting” part of the soap solution is actually sourced from petroleum. This soap and all other Procter and Gamble products have petroleum-based ingredients and are packaged in plastic. So when this soap is poured on oil slick-covered ducklings, we are actually fighting oil with oil. This is a pretty toxic cycle if you ask me. Procter and Gamble must do better and I do not recommend this product.

Dawn platinum powerwash is a new spray foam soap created by Procter and Gamble. It is advertised as 5x more efficient than regular soap. This product is supposed to allow consumers to easily clean their dishes by simply spraying, waiting for the soap to break down grease, then rinsing and wiping. Due to its ability to break down grease so quickly, it contains quite corrosive and unhealthy chemicals.

One of the ingredients in this product is Ethanolamine. This chemical is designed to break down grease yet it poses a variety of concerns. These concerns include respiratory effects, general systemic/organ effects, chronic aquatic toxicity, nervous system effects, skin irritation/allergies/damage. Sodium Laureth Sulfate and Phenoxyethanol are two other ingredients that pose toxicity threats to both the environment and our bodies.

Dawn Ultra Concentrated Dishwashing Liquid soup received a D on the Environmental Working Group rating system. Many of the ingredients have the potential for acute aquatic toxicity, respiratory effects, and nervous system effects. While Dawn Platinum Powerwash Dish Spray has not yet been evaluated on EWG, I am confident that it is even worse than traditional Dawn soap in environmental and health ratings. This is by no stretch of the imagination a clean, healthy, or sustainable product.

Dawn Platinum Powerwash is sold in a “refillable” bottle, but this is yet another form of greenwashing. Yes, the plastic spray nozzle can be reattached to a new bottle of Dawn, but is this really having a positive environmental impact? The consumer still has to buy more plastic to get more of the product.

Dawn is owned by Procter and Gamble. P&G has operations in more than 80 countries. Its nearly 300 brands are sold in more than 160 countries. Ingredients are sourced from a variety of chemicals and manufacturing takes place in factories across the globe. P&G has factories across the United States and claims to make more than 90% of what it sells in the US. Prior to 2020, the majority of Dawn dish soap was made in a 114-year-old factory in Kansas City, Kansas. An updated 2.5 million square foot P&G plant has been built in West Virginia, 90 minutes outside Washington DC. The factory is highly automated so Dawn and most P&G products are now made mostly by robots. P&G company officials brag that the first humans to touch their products are the consumers buying them in stores. Whether or not this is a good thing could be disputed.

The soap contains a variety of petroleum-sourced ingredients and is packaged in a plastic bottle. Overall it has a terrible environmental impact and the lack of transparency about where the ingredients are sourced and how it's made only makes me question the integrity of this corporation more.

Procter & Gamble makes this product in a massive factory in West Virginia. The new factory is 2.5million square feet and is highly automated. This means P&G is mostly hiring people to program and fix computerized production equipment. There was limited public information available about P &G’s labor practices and employee treatment in this factory and others similar to it.

This heavily greenwashed corporation intentionally campaigns toward conscientious consumers, trying to appeal to their ethical and sustainable mindsets. P&G claims to have long-term visions to achieve 100% renewable and recycled material in all of their packaging and products. After reading their website and a variety of sources these all seem to be empty promises. The smoke and mirrors technique utilized by this corporation to minimize the consumers' understanding of their environmental impact is so frustrating. Overall I am not at all impressed by this brand or product. It is so frustrating to look at Dawn’s website and see how much greenwashing is happening. They have a whole subsection on the website dedicated to “Saving Wildlife”. It is sickening how they are manipulating the consumer to believe they are saving ducks when in fact they are contributing so much to plastic and petroleum-based pollution. The craziest thing is that each time dawn is used to clean birds it is not only polluting the ocean but is ultimately increasing our nation’s demands for oil. I would not recommend this product.