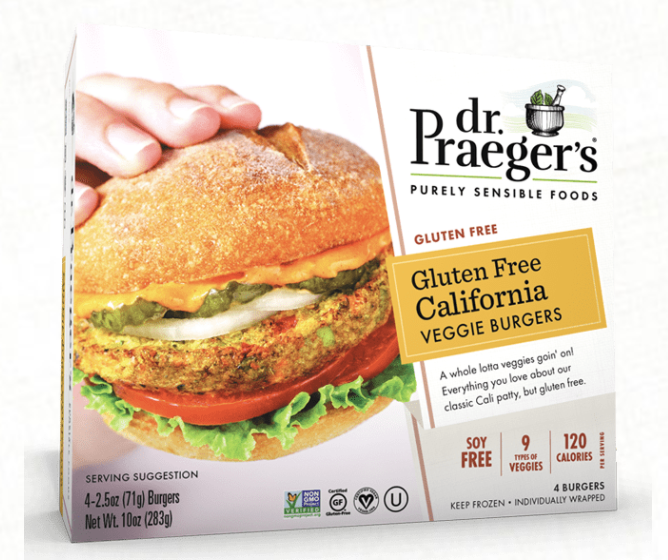 Dr. Praeger’s Gluten Free California Veggie Burger stands out for its simple and natural ingredients. The brand could improve their score by providing more information to consumers about their labor treatment and supply chain. Overall, Dr. Praeger deserves the hype for being a nutritious and sustainable meat alternative, and I would recommend their products to my friends.

Dr. Praeger’s prides itself on using simple ingredients that are easily recognizable, nutritious, and delicious. This veggie burger is made up of nine vegetables, oat bran, a few spices, and uses expeller pressed canola oil. Expeller pressed canola oil is healthier than regular canola oil because it undergoes a mechanical screw press that squeezes the oil out of the seeds, whereas regular canola oil relies on a chemical called hexane to extract the oil, leaving small traces of hexane residue. Additionally, this veggie burger is Soy-Free, NON GMO Project verified, Certified Gluten-Free, and Certified Vegan. YUM!

No where does Dr. Praeger’s give out information on how their products are specifically made, which is probably because there are so many new competitors in the market that could steal their processes. However, we do know that veggie burgers are far better for the environment than burgers made with real meat. One study from the University of Michigan researched Beyond Meat, a top competitor of Dr. Praeger’s, and found that the Beyond Burgers generate 90% less greenhouse gas emissions and require 46% less energy, 99% less water and 93% less land compared to a quarter pound of U.S. beef. We can assume that Dr. Praeger’s protects the environment in the same manner as Beyond Meat.

Moreover, Dr. Praeger’s Gluten Free California Veggie Burger is packaged in paper board and each box comes with four veggie patties, each individually wrapped in plastic. I would like to see more veggie patties in each cardboard box because there is a lot of space wasted just on marketing and labels.

A final concern I have is that Dr. Praeger’s does not give any information about its supply chain. For a company that capitalizes on health and environmentally conscious consumers, you would think they would equally market where they source their food just as much as they market what is in their food.

Dr. Praeger’s is based out of New Jersey, where they manufacture and distribute all of their products throughout the U.S. and internationally to Canada. The company was founded in 1994 by two practicing cardiac surgeons, Dr. Peter Praeger and Dr. Eric Somberg, who were inspired by their patients to create a tasty yet healthy frozen meal. After lots of research, money and taste-testing, the two new entrepreneurs created their first product, the California Veggie Burger. Since then, Larry Praeger, son of Dr. Peter Praeger took over and is the current CEO of Dr. Prager’s.

While there is no corporate information about the company’s labor treatment, past employees rated Dr. Praeger’s an average of 3.4 out of 5 stars on Indeed.com for overall experience.

Recently, the company decided to give back to their essential grocery store workers during the COVID-19 pandemic while most of the country was under lock down. Dr. Praeger’s announced they would pay each grocery store employee $200 to put towards their own groceries until they reached $20,000 worth of donations.