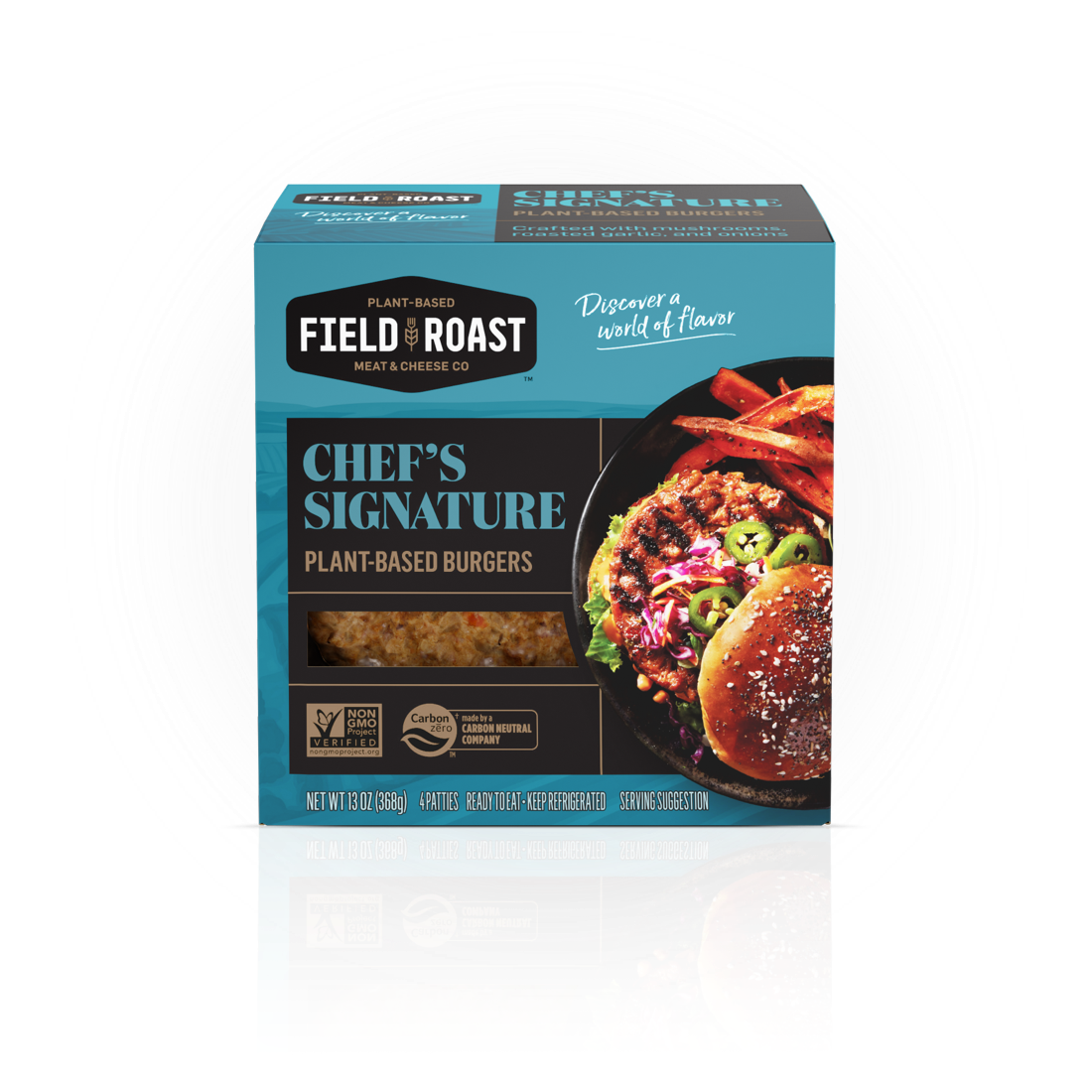 Field Roast’s Chef Signature Plant-Based Burger is one of the most flavorful alternative meat products I’ve tried. This products is vegan and certified Non-GMO. Surprisingly their palm oil, which is a common ingredient in alternative meats, is sustainably grown with pesticides on environmentally responsible land and is certified Fair Trade. I was intrigued to see not only a Non-GMO certification, but a carbon neutral certification on their packaging. Field Roast’s parent company, Maple Leaf Foods has claimed to be the first major protein company to become carbon neutral. They are one of the few protein companies to set Science Based Targets which demands 50% reduction in Scope 1, 2 and 3 emissions by 2025 and they have already made a significant amount of progress. Only part of the packaging for this product is recyclable, which should be changed. Field Roast has not provided any information about the treatment of their workers but from what I found on job sites, employees experienced disorganized management and poor wages.

The Chef’s Signature Burger’s three largest ingredients are wheat protein, wheat gluten, Organic Expeller Pressed Palm Fruit Oil. According to their site, their palm oil is sourced from Daabon, a sustainable palm oil provider. They are transparent company that founded the Palm Oil Innovation Group and uses Clean Development Mechanisms to capture the organic waste from oil extraction. Their palm oil is certified USDA organic and certified Fair Trade. It is the first palm oil company to be deemed sustainable by Rainforest Alliance. Often palm oil is a very problematic and unsustainable product. To see this company source one of its more prevalent ingredients for a credible and sustainable company is a great start. However, little is known about the origins of their vegetable and spice components. Field Roast admits their products are not organic besides their palm oil, wheat flour and wheat flakes. However, all their products are vegan and none contain any genetically modified organisms, certified by the Non-GMO Project. Without a USDA certified organic certification, their vegetable and spice ingredients could come from farms that use harmful pesticides, synthetic fertilizers or irradiation.

Field Roast’s burgers were once called “hand-formed” however, the company now provides no information on how these burgers are made, who makes them, and how much these people are paid. From testimonies from former employees found on job sites, the management is messy and the workers felt they were underpaid. The casing for their plant-based meat products is made from plastic that is not recyclable. The external packaging however is recyclable.

Field Roast is a vegan company that produces plant-based meats and cheese. This product as well as the company as a whole has been labeled as a carbon natural. Although their products are vegan, their parent company, Maple Leaf Foods is not. They are a large producer of RWA(Raised Without Antibiotics) meats in Canada. In order to keep these vegan and animal meat initiatives separate, an independent subsidiary Green Leaf Foods was created by Maple Leaf Foods. Maple Leaf’s site provides a rubric which shows how the company is currently participating and planning to participate in the UN’s SDGs. This includes a “Women in Leadership” program that is provided to senior and high-potential women facilitated by the Ivey School of Business at Western University to support SDG #5 for gender equality. Maple Leaf Foods has received media attention as the first major food company to become carbon neutral, which they achieved in 2019. They appear to have intertwined this seemly self-awarded certification by setting Science Based Targets through Science Based Targets initiative. Although “targets” is never music to sustainability’s ears, these Science Based Target are not just based on targets set by the company itself. They are guided by the Paris Agreement’s parameters for emissions reduction that will keep global warming under 1.5 degrees C. Not only do these goals include a reducing GHG emissions of the entire company by 30% by 2030 they also reduce the emissions by 30% per tonne of product. They claim to have active water conservation and energy efficiency projects across their operations. They have reduced their electric intensity by 21.8%, their water intensity by 16.7% and their landfill diversion is currently 90.7%; all compared to their 2014 baseline. However, their overall reduction of tonnes of carbon dioxide equivalents emitted is only 0.5%.
For a company that is growing, neutrality is hard to achieve but it appears with large logistical changes and equipment updates they have significantly reduced their energy consumption. They are currently seeking wind power renewable energy credits so their facilities can run entirely on renewable energy. This company has made a lot of tangible changes to their operations and also provides information about reductions in each sector of their supply chain. They have also set ambitious goals that will be evaluated by a third party. This is all impressive. Whether or not this company is truly carbon neutral is difficult to say. When I looked into Carbon Zero, the group associated with their “made by a carbon neutral company” product label, I found no information at all. This leads me to believe that their “carbon neutrality” status was self-awarded.
On Field Roast site, they claim to be working on projects in “water”, “electricity”, “solid waste” and “natural gas”; however they provide no information on what these alleged projects are or how these alleged projects are part of their “pursuit to achieve a zero-carbon footprint.”