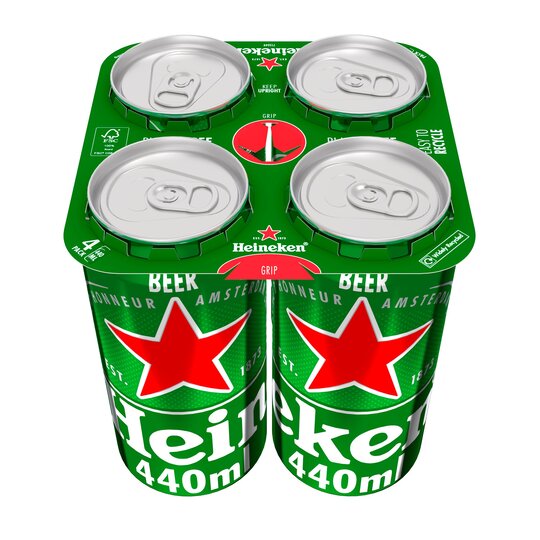 Heineken is the namesake brand of the Heineken NV multinational, one of a few companies that sell the vast majority of the UK’s beer. I was surprised at the thoroughness of their sustainability strategy, as it does consider environmental impact, social equity and promote responsible drinking. They are also reporting their current progress. However, Heineken’s promises don’t convince me. First, they are one of the largest beverage companies in the world. Thus, so much of their reporting is at a global or regional scale. This means it’s hard to tell how sustainable this one pack of beer is. Second, they have been criticised repeatedly for human rights abuses, using massive amounts of water in areas with drought and unfair business practices. They have responded, but these issues continue, such as the mistreatment of women promoting their drinks. For me, the mistreatment of women promoting their beers in West Africa years after the same scandal elsewhere suggests two things - that they wait to respond to problems until after they are publicised and that their standards aren’t applied equally everywhere. The company’s commitments to environmental sustainability and responsible drinking are small in comparison to its size. Until Heineken takes a more proactive approach and is more transparent, I would not recommend this product.

The packaging is widely recycled, and cans, in particular, are more likely to be made of recycled aluminium & are lighter, so have lower carbon emissions from transport (something that is important for heavier products like beer). Where there was plastic waste in the packaging it has been removed. There are a few ingredients (Water, hops, barley) in Heineken. It’s difficult to determine how sustainable the sourcing of these are. While about 58% of the company (not the product, or the brand) ingredients were ‘sustainably sourced’ in 2020, this is a vague statement. The lack of easily available information about specific brands or products means their sustainability is unclear. At the end of the day, Heineken is not healthy & is addictive. As a big brand, they particularly have a responsibility for promoting drinking in moderation. Their Brewing a Better World strategy includes 10% of their advertising spending to be on responsible drinking. However, in 2020, many of their country operations were not meeting this, even if they were a small proportion of their spending. Presumably, they are spending much more in the 90% of funding on promoting alcohol consumption, including at events with youth audiences like university social associations and introduction weeks in the Netherlands.

In terms of carbon emissions, beers made in Europe are likely to be in factories with low or neutral carbon emissions. The production of beer requires water. Heineken also has a history of extracting large amounts of water for their production facilities. Local groups in Chihuahua in Mexico have highlighted how a Heineken plant there uses the same amount of water as thousands of homes while hiring hundreds of individuals. Chihuahua’s aquifers are being depleted. Depletion of aquifers has negative impacts on people, farming and natural spaces in those regions. This is less of an issue in the UK and northern European markets where water scarcity is less of an issue- however, in the context of climate change will this always be true? And does that negate the wider impact of the same product in different markets? In my opinion, no. Sustainability shouldn’t be limited to European markets. There is less water used per litre than 10 years ago, and Heineken has several projects to replenish watersheds globally. This is progress, but this still isn’t an absolute reduction in water consumed in these areas. Furthermore, several projects have not begun or equalled the water that Heineken uses. Overall, there is still a long way to go in terms of sustainability in production.

A concerning issue with Heineken is its rate of accidents and fatalities in production facilities. Again, the company has responded and accident levels had started decreasing by 2020. In a different area, the working conditions for ‘beer girls’ who promote the company are also dangerous. In West African countries, like Nigeria and the Democratic Republic of the Congo, they weren’t paid enough to cover living costs, had to work alone with clients, drink large amounts of alcohol, and were being harassed in more public settings. When this mistreatment was publicised in the Netherlands in 2018, Heineken revised their report of 200 promotion women in 2 countries to a much higher 4000 women in 13 countries. Heineken did respond with new policies, but the same problem, its publicisation and then response also happened in South East Asia in the early 2000s. Overall, it seems like Heineken is not proactive in treating its staff fairly. The same problem happened many years apart after responding to the issue and they changed their data following scrutiny. This means I struggle to trust Heineken in their pledges or in their stated numbers.