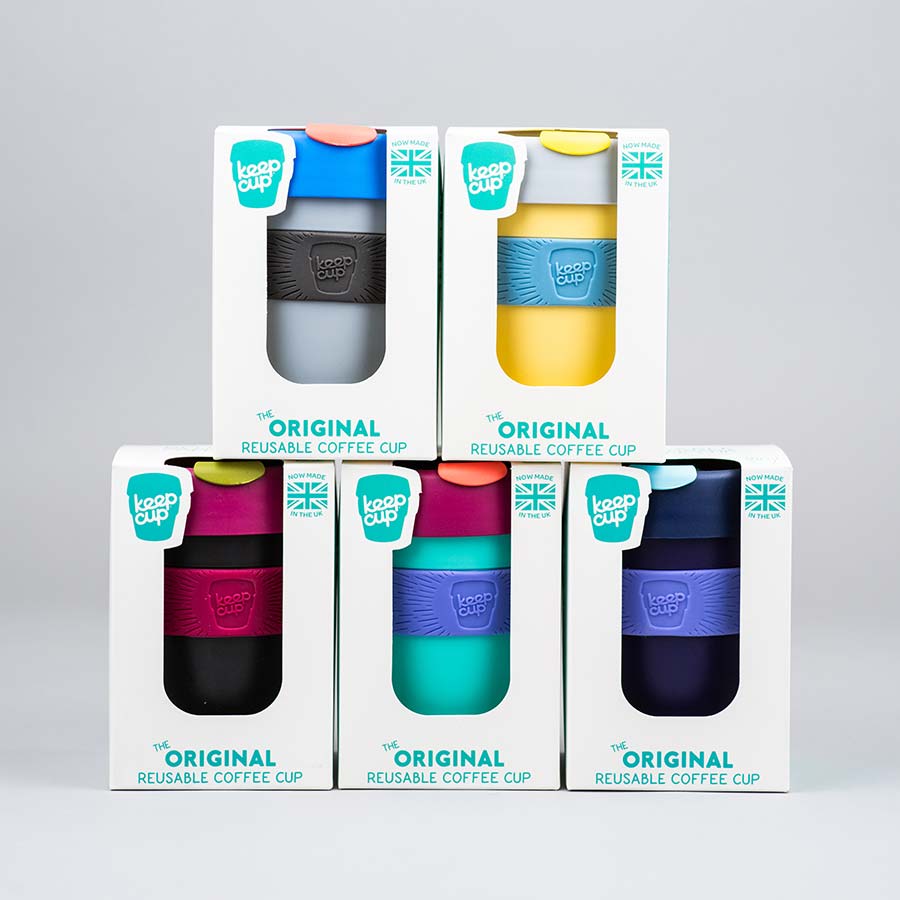 Every year it is estimated that over 600 billion disposable cups are used and discarded to landfill, globally. KeepCup is the "world’s first barista standard reusable cup". It's available in a range of materials, colours and sizes to suit everyone. The materials do include plastic and silicone which may not be typically associated with sustainability, however, there are very detailed reasons on their website as to why they use the materials they do rather than certain alternatives.

The company motto is "the best reusable is the one you use". Their aim is to help drive effective, long term behaviour change. KeepCup first launched in Melbourne, Australia in 2009. Their London office opened in 2010. The cups are now used in 75+ countries around the world, diverting millions of disposable cups from landfill every day. They have a carbon-neutral target of 2025.

They are one of the founding Australian B Corp Members (2014). They publish on their website that their current B Impact score is 107.4 against a global average score of 96.6.  In addition, they became a 1% for the planet member in 2019.

Overall, there is a lot of transparency on their website, and it's very easy to navigate. The company does not appear to be hiding anything or trying to divert peoples attention. They seem as honest about their triumphs as about their shortcomings.

They currently have 3 types of KeepCup: Original, Brew and Thermal. A very detailed breakdown of the materials they use for each specific component of each cup is on their website, along with the way in which each component is reused, or recycled.

I will provide a very brief and quick summary of some of the material 'umbrellas' they use. Plastic is used for different parts; from the actual cups to lids and plugs. They say their plastic components are designed for longevity and made well, for them it is part of the solution; replacing single-use and driving reuse. Stainless Steel is used for their Thermal Cup, these products are made from 35% recycled stainless steel. Their third range of cups is made from glass, which if it's faulty or breaks, is ground down and recycled into bottles or used to replace sand in road base.

Recycling is a common theme with all the materials they use. They collect all of them back if they are faulty or broken, then they are taken to local processing plants and recycled. They admit that they are currently unable to recycle their silicone parts, however, these are collected and stored whilst they search for a local commercial recycling solution.

The retail packaging and outer mail cartons are entirely FSC certified cardboard. Cartons are made from 100% recycled cardboard. In 2019 they redesigned their packaging to not only reduce breakage by 91% but also used 39% less material. Lastly, they have worked with their China manufacturers to ensure items are delivered in low impact packaging made from 100% cardboard rather than single-use plastic.

Each cup is made with as few parts as possible and there is use of common parts across products. This is so that if a part is lost or damaged it is easily replaceable rather than a customer having to buy a whole new product. On their website, they have the option to purchase replacement parts. This in turn reduces the overall impact on the planet.

The company works with sustainability consultants Edge Environment to assess the environmental footprint of their products against single-use and multi-use alternatives of various materials. They say they have a lower carbon footprint than disposable and reusable alternatives.

They also have a Life Cycle Analysis that identified hot spots in the supply chain. For example, the importance of efficient wash practice to extend product life whilst lowering the footprint of KeepCup.

As mentioned above, they have 3 ranges. On their website, they break down each component of each cup into specific materials used, benefits and care instructions followed by part manufacture, manufacture waste, assembly waste and end of life.

In the part manufacture section, it simply states the country in which the product is made. The countries listed are Australia, the UK, China and Portugal.  If it is made in Australia or the UK they are likely to be using local manufactures as it states so elsewhere on the website. They also acknowledge they are a global business and specify that 41.5% of supplier spend is on suppliers within 80km of hubs.

It states that the company has equal pay across gender and are a certified living wage employer.