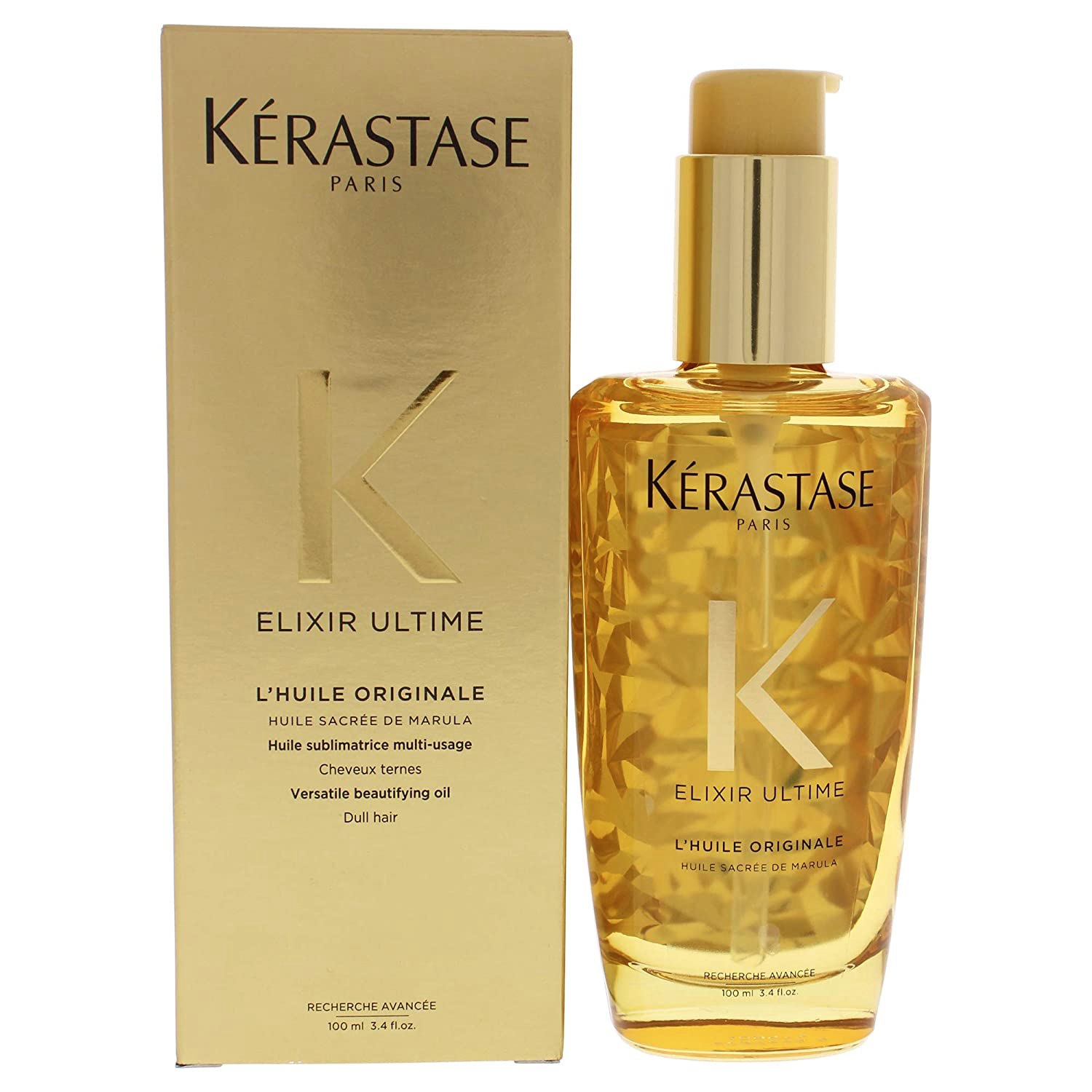 Caroline Lubow
4/20/2021
No items found.
Overall, while Kérastase seems invested in using sustainable ingredients and having an eco-friendly production process, the company is not admirable on a whole. Kérastase does devote a portion of their website to reminding customers about eco-friendly at home practices. Before using their products, they advise individuals to air-dry or towel dry their hair instead of using a hair dryer. They ask their customers not to leave their hair tools on stand-by and to unplug them instead because “between 9 and 16% of the electricity consumes is used to power appliances when they are in stand-by mode.” However, while this may come across to consumers as meritorious, this statement rather reveals how the company is putting more responsibility on their consumers to reduce the carbon footprint of the company than on the company itself. Overall, Kérastase’s devotion to the environment is rather ingenuine. Given the success and stability of Kérastase and the L’Oréal Group, we should expect more from this company, and at the very least for them not to mask the truth of their practices to their customers. When it comes to rating the company overall, I can only commend Kérastase for their acknowledgment of the importance of sustainable practices in the beauty industry and the ways in which the company has acted accordingly with respect to some of their ingredients and their production processes. While this is a low bar, unfortunately the beauty industry has been held to an even lower standard for decades.

The ingredients for this hair oil include Maize oil, Procaxi oil, Argan oil, Camellia oil, Cyclopentasiloxane, Dimethiconol, Zea Mays Germ Oil / Corn Germ Oil, Argania Spinosa Kernel Oil, Sclerocarya Birrea Seed Oil, Camellia Oleifera Seed Oil, Pentaclethra Macroloba Seed Oil, Caprylic/Capric Triglyceride, Linaloo, Alpha-isomethyl Ionone, Limonene, Coumarin, Benzyl Alcohol, Phyllanthus Emblica Fruit Extract, Tocopherol, Parfum / Fragrance. Kérastase is very vocal when it comes to their sustainable practices. Their website includes statements formatted in large, bolded font such as “We turn natural ingredients into exceptional haircare formulas, developed to protect the natural world on which we depend” and “The story of exceptional hair starts with nature, and those whose work involves sourcing our raw ingredients.” Given these profound statements, I decided it would be especially crucial to examine the ingredients of their products in order to determine the truth of these claims. After looking more closely, I can honestly say that I believe Kérastase is truly acting on these commendable statements. Kérastase has also put forth a statement about the biodegradability of their products: “Kérastase is determined to lower its environmental impact by specifically choosing ingredients with high biodegradability for all formulas. With Aura Botanica, the brand has reached a remarkable average of 97% of biodegradability.” The singular ingredient in their Elixir Ultime Oil Serum which I found to be a cause for concern is their use of argan oil. Argan oil comes from the kernels of argan trees, which are native to Morocco. Given the oil’s high concentration of fatty acids and antioxidants, this ingredient is popular in the skincare and beauty industries. The extraction of argan oil from argan tree kernels need not pose any threat to the environment or the quantity of argan trees on the planet. This is because the oil is extracted from fruits which have already fallen from the tree. However, the high demand for argan oil in recent years has resulted in harmful extraction processes. Beauty companies are at the root of this problem. Now we are seeing more and more instances of ‘aggressive harvesting“ where people are cutting down argan trees in order to gain access to the fruit more quickly than if they were to wait for the fruit to fall on its own. These practices are driven by competition between companies that use argan oil in their products, such as Kérastase. Thus, while argan oil harvesting need not be considered a harmful environmental practice, it is important to be critical of how exactly Kérastase is acquiring their argan oil before writing off their ingredient list as completely eco-friendly.

Kérastase is very transparent about their production process. Kérastase states that they are “dedicated to the sustainable use of materials, the reduction of water waste, and to lowering its carbon footprint.” Nearly all Kérastase products come from their factory located in Burgos, Spain. They claim that this factory “has had a neutral carbon footprint regarding its production since 2015” and that the factory produces enough energy to power itself. They use “12,000 tons of waste wood from the forests of the Castile and Leon regions.” Additionally, “the biomass plant” is fashioned with solar panels. While Kérastase’s production process is certainly impressive, I am more skeptical of their packaging. The company does not elaborate on the materials they use to package their products. As someone who owns their Elixir Ultime Serum, I can say that the bottle is glass and s fashioned with a plastic pump. The bottle is very heavy, likely to give off a luxurious feel, which the brand definitely strives for. Additionally, the product comes in a thin, cardboard box that has a plastic coating. Because I have owned this product, I am knowledgeable of this detail. However, Kérastase does not disclose this information online, so I cannot confirm that the packaging is recyclable or in any way eco-friendly. This is unfortunate because, given this lack of transparency, I don’t feel I can give the company the benefit of the doubt when it comes to their packaging process. In a Facebook post published on April 22, 2020 ( Earth Day), Kérastase describes how to properly dispose of and recycle their bottles. This post also mentions that, while their caps are not not recyclable, they are working on changing this. Though it is great that Kérastase has elaborated on the proper ways to dispose of their product, such a step by step process should be made more visible on their website. Clearly their products are mostly recyclable, and it is important that their customers be informed of this through more than a dated Facebook post.

Kérastase declares their commitment to sustainability. They state on their website that their intention “is to become a role model for sustainable luxury, taking ‘exceptional care’ to the next level.” Given the information about their ingredient list and production process which they disclose, it appears that Kérastase is truly dedicated to this goal. The brand also discusses their plans for the future in a manner which demonstrates that they understand they have room to grow. They state that they are working on making recyclable caps, which shows their transparency in terms of where they intend to better their sustainable practices. However, though Kérastase is transparent about many of their sustainable practices, the company is less transparent in other realms. Kérastase does not disclose information about their philanthropic involvement, and thus, I again feel I cannot give them the benefit of the doubt and must assume that the company is not involved in any philanthropy. Given the steep price of their products, this is especially disappointing. It is also important to note that Kérastase is owned by L’Oreal. L’Oreal is an international cosmetic company, and presently the largest cosmetic company in the world. In response to a frequently asked question about the company’s animal testing practices, Kérastase has released this statement: “We are happy to confirm that the L'Oréal group of companies, which includes Lancôme, Redken, Garnier, Ralph Lauren, Giorgio Armani, Biotherm, Kérastase, and Vichy, as well as L'Oréal, has carried out no animal testing since 1989 on the entire range of its products. This decision was undertaken within the framework of our fundamental objectives: to offer innovative products of high quality while ensuring their safety in use by our customers.” While this seems great and all, L'Oreal has received scrutiny for this misleading claim. While the company does not test on animals, they do distribute products to China where animal testing is mandated for foreign cosmetic products. By distributing their products to a country where animal testing is mandated, L'Oréal, and thus Kérastase, are implicitly condoning these practices. Such a large, profitable company has the ability to decide against distributing their products to China without facing long-term financial repercussions. With this in mind, we must scrutinize the company for such a choice which reveals their true ethical standards, or rather lack thereof. While Kérastase has made commendable efforts to be a role model when it comes to sustainable beauty, the company conceals their less commendable practices. This is very disappointing. Not only does Kérastase have the financial backing to devote more resources to being a sustainable beauty brand, but their attempts to hide damning information about their harmful practices reveals their true motives are neither ethical nor praiseworthy.
Return to Reviews