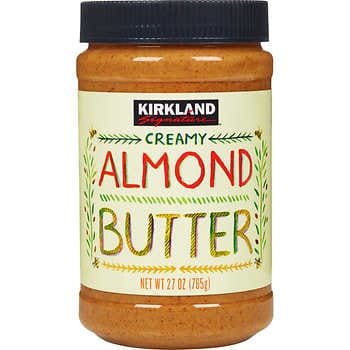 When it comes to the sustainability space, Costco usually isn’t the first company to come to mind. But upon research through the exploration of one of it’s private-label Kirkland Signature products, the 27 oz. creamy almond butter, it is clear that Costco really values quality, sustainability, and affordability when it comes to its products. This nutty spread is no exception, and you don’t need a Costco membership to purchase it. It can be found on other retailers such as Amazon for around 8 dollars, but if you do have a Costco membership, you can purchase it for the affordable price of $6.49.

Roasted almonds. That’s the only ingredient used to make the almond butter. There’s no palm oil, sugar, or any other additives. Despite many articles that came out about how almond production is ruining the environment around 2016 when almond milk grew in popularity especially amongst young people, there has been scientific research showing that its water footprint (which is almond’s biggest environmental criticism) is actually worth the dietary and economic benefits of almonds.

Because of its mild, wet winters and hot, dry summers, California is the ideal climate for growing almonds and is responsible for almost 100% of commercial almonds in the U.S., but during the drought from 2012 to 2016, the 8% of total agricultural water supply dedicated to almonds seemed like an alarmingly high number. The production of a single almond requires 1.1 gallons of water, and almond trees need water year-round even during non-production seasons. However, in comparison to other major agricultural products from California, almonds are actually much less water-intensive. A single pound of beef requires 1,800 gallons of water, and one-third of the state’s total water budget is dedicated to meat and dairy production. In addition, almonds are highly nutritious, dense with protein, healthy fats, vitamins, minerals, and antioxidants. They are also high in economic value, supporting over 100,000 jobs and accounting for $11 billion to annual GDP. Beyond that, California farmers are also working on agricultural solutions to increase water efficiency through a balanced use of microirrigation systems and groundwater recharge. To briefly explain, microirrigation systems conserve water by only utilizing water where crops require it as opposed to watering the whole field, while groundwater recharge is when orchards are flooded to replenish underground aquifers which are later used for drinking water and agriculture.

My main criticism for this product is that the almonds used aren’t organically farmed. Conventionally grown crops use a lot of pesticides, and that’s a major problem for almonds because, in order for almonds to grow, bees must pollinate each blossom. Bees and almonds trees operate in a symbiotic relationship where almond pollen is a highly nutritious food for bees to begin their pollination season, and almond trees need to be pollinated in order to bear fruit. Unfortunately, the USDA Pesticide Data Program has found four out of nine pesticide residues in almonds are toxic to bees contributing to the major issue of declining bee populations.

However, Costco does acknowledge the complex issue of pollinator health and has taken some action to reduce toxic chemical usage and support bee populations. First, Costco has adopted a global pollinator health policy for all produce and plant products sold in their warehouse to encourage suppliers to phase out neonicotinoids and chlorpyrifos (pesticides) and adopt integrated pest management practices instead. In the 2020 fiscal year follow-up survey, Costco found that 70% of all live goods suppliers have eliminated the use of neonicotinoids and nearly 100% have eliminated the use of chlorpyrifos. I really appreciate the transparency in the progress update for this goal! For almond growers, they recommend planting buffer zones and using cover crops to support honeybee and soil health. Additionally, Costco has invested over $4 million in a nonprofit honeybee research organization, Project Apis m., a portion of which comes from sales of Kirkland Signature honey. The Seeds for Bees program from Project Apis m. offers seed mixes for cover crops that bloom during critical times of the year when natural forage is scarce but bees are active.

In general, Costco also has great supplier practices in regard to environmental sustainability and human rights. On their website, they list ten rigorous stewardship goals from “ensuring free, prior and informed consent of indigenous people” to “conserving or restoring natural ecosystems.” Fifteen Costco suppliers are also working with the Equitable Food Initiative (EFI) on 41 certified operations with high labor, food safety, and pesticide use standards. Overall, Costco does do a great job addressing a number of material issues within their supply chains and business model, but I would be interested in seeing more progress updates/actionable steps being taken/evidence of meeting broad statements.

Costco emphasizes a multi-stakeholder approach to conducting business considering members, suppliers, employees, investors, and communities. I wanted to take the time to highlight Costco’s relationship with its employees. The way Costco cares for and treats its employees should be the standard for any retail job. Costco provides competitive, livable wages and benefits to all employees with the goal of minimizing turnover and maximizing employee commitment and productivity. Costco also heavily supports career development and promotions within employee ranks; over 70% of warehouse managers began their Costco careers in hourly positions. When people are hired at Costco, they are given a career, not just a job. Furthermore, Costco is fairly transparent about the diversity, equity, and inclusion present at their warehouses publishing demographic breakdowns for all employees and supervisors/managers. Although, the DEI section of their website could definitely be improved with increased detail and explanation of ongoing initiatives and firsthand experiences of employees.

Costco also has a really impressive Climate Action plan where they will track and implement goals for environmental compliance, water, energy, waste, and scope 1, 2, 3 emissions from 2021 to 2024. The plan is clearly laid out and constantly updated, meeting some of the goals/tasks just this month. It is clear that Costco genuinely takes sustainability seriously as a part of its mission to provide high-quality and affordable products to consumers.