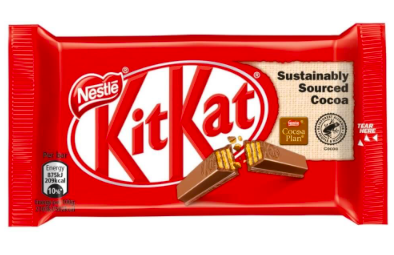 The KitKat is what I have always thought to be one of the most simplistic but tasty snacks in the market. However, the simplicity that I admired KitKat for is not truly a fair representation of the product, especially in light of Palm oil scandals that have plagued Nestlé’s production of KitKats. As a result, even when I see that Nestlé have managed to source 100% ‘sustainable cocoa’ in what appears to be a worlds first, I am left sceptical and worried that the initiative may crumble or be revealed as disingenuous. Despite these clear slip ups and questions in ingredient sourcing, I believe that Nestlé are one of the most well prepared and technologically astute companies when it comes to sustainable production. I say this in regards to their deeply detailed reports on how they optimise their production processes, but also the transparency they provide regarding the metrics and technology used to accurately measure their progress. Put simply, Nestle don’t just give us numbers, but let us know exactly where those numbers come from. From my research, this is surprisingly rare, especially for companies at the magnitude of Nestlé. Overall, the KitKat has a sustainable trajectory, but issues in the ingredient supply chain pose a risk of derailing good progress.

The key ingredients of a KitKat are the wafer, made of sugar, wheat flour and milk powder, and the chocolate coating, made with cocoa butter and vegetable fats from palm oil. For the most part, the wafer is made with conventional and local ingredients, however, the chocolate coating is where complications arise. The most important of these relates to palm oil, which as I’ve discussed in previous reviews, is a resource which requires intense deforestation and carbon emissions to extract. In order to curb the unfettered destruction of forests, the Roundtable on Sustainable Palm Oil (RSPO) was formed to certify sustainable palm oil farmers. You might wonder how KitKat’s fit into this system, and initially it was good news as Nestlé were an active member of the RSPO and encouraged the sustainable sourcing of palm oil. However, in 2018 Nestlé was suspended from the RSPO for failing to submit a progress report for 2016, giving rise to other foundations such as the Rainforest Action Network (RAN) attacking Nestlé as a ‘cherry-picker’ who ‘moves the goalposts when it suits them’.

All in all, this is pretty damning evidence against Nestlé who clearly disregarded protocol, and suffer the consequence of no longer using sustainably certified palm oil. Despite this, I’d argue that this is merely an abdication of responsibility by Nestlé, rather than a complete abandonment of sustainable principles. I say this because the RSPO itself is not the only mechanism to ensure sustainable practice, and when the suspension concerns a procedural issue, Nestlé has still sourced all of its palm oil sustainably but has slipped up with some of the rules. This sentiment has been shared with Greenpeace who have argued that the suspension is unnecessary and hypocritical seeing as RSPO board members have also broken rules. All in all, despite the controversy and lack of certification, Nestlé still actively promote sustainable palm oil extraction.

The second key ingredient of cocoa is one where I can’t really accept that Nestlé is trying its best. This is predominantly for social sustainability reasons concerning their cocoa farms in the Ivory coast, and is something I will touch on in the final section.

The final element I want to touch upon is the packaging of KitKat’s which typically comprises of plastic, but is swiftly being transitioned into paper in large markets such as Japan. This paper packing is fully recyclable and has been certified by the Forest Stewardship Council, a vigorous and popular certifier from the UK. This has been paired with KitKat attempting to tap into cultural incentives for the new packaging by launching an Origami marketing scheme for the paper packaging. I’d say this is an inventive and desirable campaign choice for a market like Japan. Although this is all exciting and positive, it will only save around 380 tonnes of plastic a year. Although this sounds like a lot, it is minuscule compared to the 1.3 million metric tonnes of plastic packaging that Nestlé used in 2020. All in all, it’s a cute initiative, but not one of substance. Nestlé desperately need to improve their packaging if they want to be taken seriously as an environmentally conscious company.

In regards to the emissions and wastage in the production process, KitKat has lofty ambitions to become carbon neutral by 2025, meaning that the emissions produced by the production process have to be cut by more than 50%, paired with multiple carbon offset initiatives. As of 2021, KitKat are on the road to this, but the pace is slightly off the boil. Although they have successfully transitioned many of their factories onto renewable energy sources, Nestlé has been limited in improving the carbon footprint of their cocoa and milk suppliers, with the quality of infrastructure and measurement technology being weak in the regions they source from. This means that gauging an accurate improvement is difficult and painstaking, and will surely not be achieved by 2025.

In other areas such as water efficiency, Nestlé is again struggling. The online tracker of their commitments initially shows positive progress with 2 out of 4 water commitments being achieved. However, in reality, these achievements are relatively weak as they simply concern improved advocacy and awareness. The two objectives of increasing efficiency and engaging with suppliers are left incomplete and have to be suspended. In my view, this section of the report seems to be too self-congratulatory and seeks to hide the inadequacy of Nestlé’s waste water management. Despite this, there is a silver lining when you dive into the details, with Nestlé being very organised and committed to tracking their data accurately. An example of this is that Nestlé openly shares the suppliers of its tracking technology, with Aquassay trackers being used to track water management.

The labour conditions involved in the making of KitKat’s has always been an area of conflict and concern. If you cast your thought back just 7 years ago, auditors from the Fair Labor Association (FLA) found that at 260 of Nestlé’s farms, there were 56 workers under the age of 18, 27 of which were under 15. Moreover, the FLA found evidence of forced labor, with a young worker not being paid an annual salary. This is absolutely appalling misconduct, not just in relation to Nestlé’s own code of conduct, but also article 4 of the European Convention on Human Rights (ECHR) which prohibits any form of forced labour. Although Nestlé is not directly employing or operating these farms, simply having them as an element of the supply chain suggests that Nestlé has no concern for the social sustainability of its workers. However, with this being 7 years ago, it’s important to see if Nestlé have taken appropriate accountability for this. In general, it appears that they have, with Nestlé triumphantly advertising their 100% sustainable cocoa supply chain in the Ivory Coast. Although the specific details of this aren’t shown on their website, they have produced multiple miniature films which actively depict the key pillars of their sustainable farms. This is not only entertaining, but provides a great insight for those who want to know more. Moreover, Nestlé have partnered with the Didier Drogba Foundation, one of the largest charitable foundations in the Ivory Coast, with whom Nestlé will be targeting health and educational inequality. In the end, it appears that Nestlé have learned from their mistakes, and have taken every precaution to avoid them in future.

Moving out of the supply chain and into the actual operations of Nestlé, the company appears to be highly progressive in its attempts to accelerate social cohesion and diversity balancing both in its operations and for society. A key initiative that exemplifies this is Nestlé’s Gender Balance Acceleration Plan, which has led to Nestlé being recognised on Bloomberg’s Gender Equality Index for two years running. This recognition aims to reward companies at the forefront of gender balance and transparent workplace reporting. Moreover, Nestlé transparently displays its key aims for the promotion of human rights, in which they have successfully achieved 3 out of their 4 key aims, having partially achieved the last aim. In summary, these goals have enhanced the livelihoods of workers and fostered a culture of integrity across the organisation. All in all, I’m happy to conclude that Nestlé are on a good track to make social sustainability a top priority in their products.