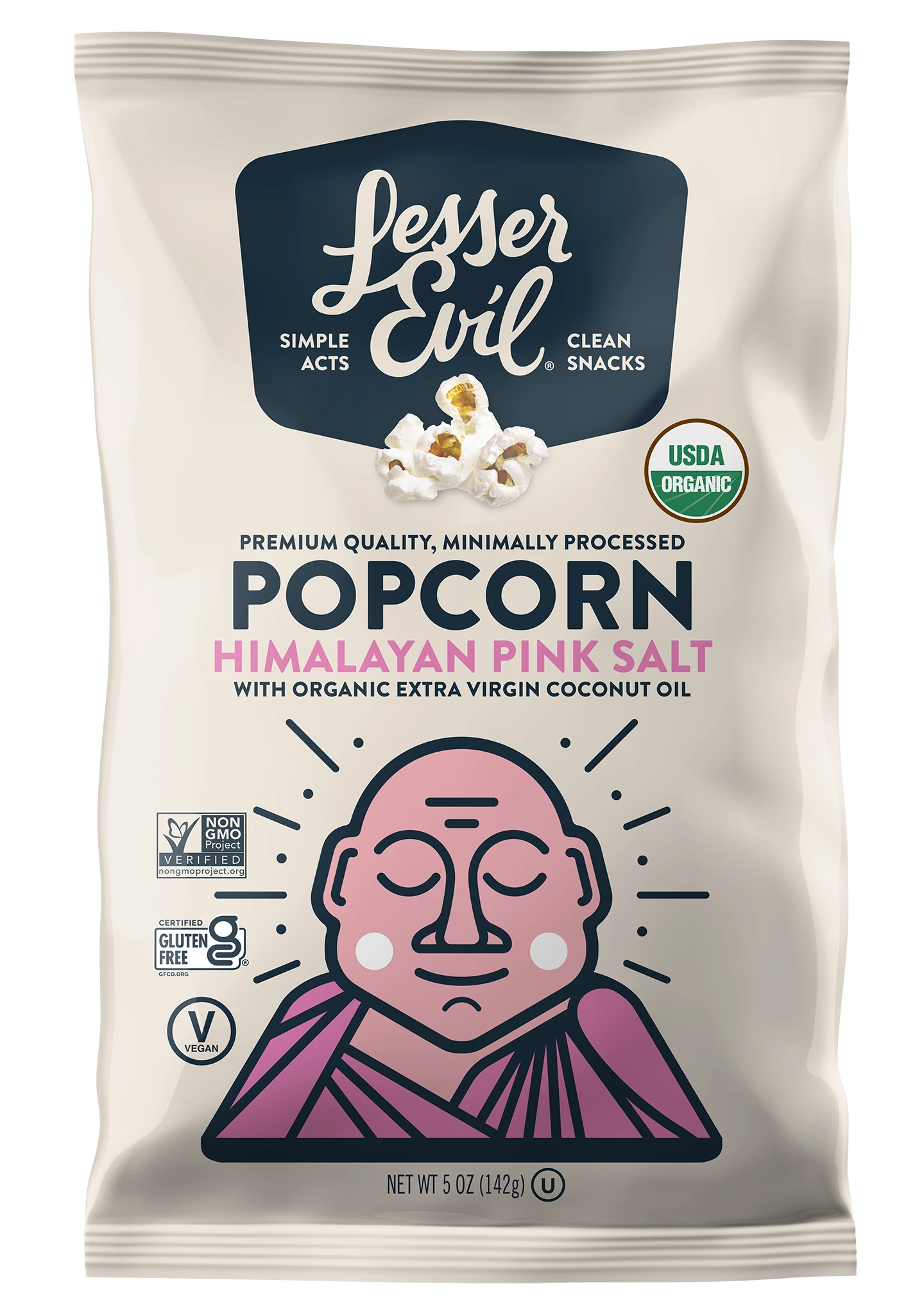 The first image of popcorn that pops (no pun intended) into my mind is an overpriced movie theater delicacy with lots and lots of “butter.” Lesser Evil has been chipping away at this sentiment by offering an affordable and healthy alternative that doesn’t make snacking a crime. I was inspired to write this review because I’m a fan of Lesser Evil’s products and wanted to find out if the company is truly as sustainable as it brands itself to be. The answer is yes, with the seemingly inevitable caveat of vagueness. While Lesser Evil is transparent and proud about its minimal ingredients list, it neglects to answer the real questions as to how those ingredients are sourced. In the same vein, Lesser Evil prides itself on its one-stop-shop factory in Danbury, Connecticut, but offers little information about how the actual humans in those factories are treated. After all, the company is called Lesser Evil, not Least Evil.

According to Lesser Evil’s website, the Himalayan Pink Salt Popcorn is made with only 3 simple ingredients: organic non-GMO popcorn, organic extra virgin coconut oil, and Himalayan salt, a healthy snack considering all the additives found in other popcorns. Rarely do I see a product with such a bare-bones ingredient list, so I was pleasantly surprised that the company had recognized that lesser evil starts with fewer ingredients. The company also states it uses no genetically modified ingredients, refined sugars, refined salts, antibiotics, hormones, preservatives, or artificial flavors or colors. Lesser Evil also does a good job of explaining what the bag itself is made of. Lesser Evil partners with NEO Plastics, a subdivision of the packaging company Aripack. On top of being biodegradable, NEO Plastics packaging contains an organic additive which, once discarded into a landfill, accelerates the natural microbial process by creating a biogas which can be turned into renewable energy. Landfills collect this biogas, usually methane and carbon dioxide, through vertical pipes that vacuum up the gas and send it to plants located on the landfill. This renewable energy is then processed and added to local power grids to power homes and businesses in the community. According to Aripack, more than 600 managed waste facilities, representing 80% of today's waste in the U.S., recovers these biogasses. But that’s only referencing the trash that says in the states. According to National Geographic, “In 2016, more than half of the 3.91 million metric tons of plastics collected in the United States were shipped abroad. Of that, 88 percent went to nations lacking adequate resources to properly manage and process it.” Despite this, I respect Lesser Evil for thinking critically about the total life cycle of its products.

Lesser Evil says it sources its popcorn from the midwest and “growers follow modern, sustainable farming practices and are constantly educated on the most recent advances.” I was left wondering what sustainable farming practices its growers use. Its coconut oil is sourced from the Philippines and undergoes a three-level screening process to ensure the cleanest oil possible. First of all, I would be interested in knowing what criteria goes into this three-level screening process. Second of all, coconut oil production has directly contributed to the endangerment of the Balabac mouse-deer, a rodent native to the Philippine Islands. While the Balabac mouse-deer isn’t a pillar of the Philippine ecosystem, Filipino Muslims, notably the Molbog people of southern Palawan, consider the mouse-deer as sacred for its appearance in many folklore stories. As for coconut oil production on a more global scale, the International Union for the Conservation of Nature (IUCN) states that coconut threatens 20.2 species per million metric tonnes of oil produced. Finally, Lesser Evil states that its Himalayan salt is sourced from Pakistan from family-owned companies that “believe strongly in sustainability.” The overarching theme here is that Lesser Evil gives me a look at ethical sourcing, but it's through a peephole small enough that I can’t make out the details. I would be much happier if Lesser Evil were to give me the names of the farms it sources its products from and why those operations are sustainable. I can, however, applaud Lesser Evil for its manufacturing process. In 2012, Lesser Evil decided to stop working with co-packers and open up its own factory in Danbury, Connecticut. The company displays pictures and videos from inside its factory, showing it has nothing to hide. This factory is equipped with automatic faucets to reduce water consumption, a new energy recovery ventilator that redirects hot air to melt production oils, and LED reduced-energy lighting. On top of that, the Lesser Evil disposes of almost all of its waste in a local composting facility and is working to install solar panels at its factory. This is the most information I’ve gotten from a company about its manufacturing, so keep up the good work Lesser Evil!

After 18 years of working for major corporations like Morgan Stanley and TD Ameritrade, Charles Coristine was burnt out and needed a new direction. During his search, he came across the Kripalu Center for Yoga and Health in Massachusetts. There, he met a Swami who introduced him to practices of mindfulness and meditation. This inspired Coristine to buy the sinking Lesser Evil company from desperate owners and infuse Buddhist messages, phrases, and imagery into his company’s brand identity. I decided to look into Kripalu and I found that 40 of its 44 employees are white-passing. While this isn’t a review on Kripalu itself and an essentially all-white staff doesn’t necessarily discredit the center’s teachings, it made me consider if attending a few Yoga retreats really gives Coristine permission to slap a big Buddha onto all of his popcorn bags. To me, this came off as a bit of whitewashing and a bit of cultural appropriation combined. As for Lesser Evil’s fair labor and community engagement initiatives, the company states, “We contribute to our community by nurturing our employees and donating our gifts where we can.” People say the proof is in the pudding — not the popcorn — so I have no reason to believe that Lesser Evil treats its workers fairly and gives back to the community.