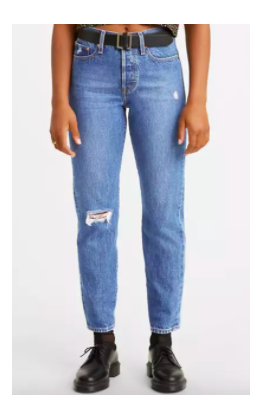 Overall, Levi’s is probably one of the most well-known brands in the world, and they have a lot of market power and influence. While they have implemented many initiatives that reduce their environmental impact, by no means could they be considered a sustainable company because of all of the pollution they have contributed in the past without remediation and their overall extractive business model. There will have to be larger societal changes that incentivize Levi’s to take more drastic steps to protect the planet, and that will come from ordinary consumers putting pressure on corporations and governments to see real progress towards a circular economy that is equitable for all.

The two main components of denim jeans are cotton and chemical dyes, both which are known for their harmful environmental impacts. No one knows this better than Levi’s. They actually invented denim in 1853 for people who were working during the Gold Rush and needed durable pants. Since then, jeans have become synonymous with Levi’s, and they have always led the industry in terms of style and innovation. Producing cotton is a typically pesticide and water intensive task, and for decades Levi’s has farmed cotton in a very unsustainable manner. Now 83% of their cotton comes from the Better Cotton Initiative (BCI) or recycled cotton farmers. BCI is a program that helps farmers harvest cotton organically, which means zero pesticides and significantly less water use. Their sustainability report claims that they will reach 100% BCI cotton in the near future, but there was no plan on how or exactly when that will happen. Recently, Levi’s has been experimenting with using hemp as a replacement material for cotton. This line of clothing is called WellThread, and they have been marketing it extremely heavily (who wouldn’t). After a little bit of digging, their WellThread line only makes up 9 or 10 products out of the hundreds that they have, but based off of their PR you would think that the majority of their clothing is using this revolutionary technology. This is called greenwashing, and it really rubs me the wrong way. When a curious consumer looks up sustainable denim companies, Levi’s is always one of the first to show up, and part of that has to do with all of the marketing they do, but the truth is that they have a long way to go until their business model is sustainable. Another reason why denim is an unsustainable industry is because of all of the dyes that go in to giving jeans their classic color. In the last couple of years Levi’s has reduced the number of chemicals used to make their jeans from 1,000 to only 12, which is significant progress. However, there was no mention of remediation for the environmental damage that their products have caused up until this point. Levi’s is definitely putting effort into making their products more sustainable, but they have also had the most time to redefine sustainable denim and I think they should be farther along by now.

Levi’s has come a long way in terms of how sustainably their goods are made, but their overall business structure has a long way to go until they can consider themselves contributors to a circular economy. Denim is one of the most water intensive apparel items on the market because jeans are washed several times before they head to a retail store. Levi’s has patented their Water<Less technology which reduces water use by 96% and it is currently used in 70% of their products. They mark whether the product has the Water<Less technology by writing ‘sustainable’ below the name of the jean on the website. But just because there is a lot less water use, that doesn’t mean that the product is inherently sustainable. Sustainability requires every aspect of the supply chain to be circular, and there should be nothing that is extracted from the earth that isn’t readily replenished, so claiming sustainability because of less water use is taking advantage of the consumer that cares about making a positive impact through their purchases. Furthermore, in their sustainability report Levi’s boasts that they have reduced emissions by 90% in their owned and operated factories, but only 3 or 4 of their 619 factories fall into the owned and operated category. The rest are contracted out in countries all over the world. The true reason as to why I gave Levi’s such a low score in this category is because of the emissions that go unabated. Their cotton is sourced from Turkey, then the raw material is shipped to factories all over Asia and South America. From there the jeans are flown to countries all over the globe, then ultimately end up in a landfill. Levi’s could be more sustainable if they had factories near where their jeans are sold and then the jeans wouldn’t have to fly around the world just to end up underground. Levi’s has recognized the importance of increasing the life cycle of their products so there is less waste. They started a secondhand program where consumers can send back their used jeans, and they will be refurbished and sold for a much lower price. This is a great initiative because it increases accessibility, and saves a lot of CO2. Levi’s definitely does care about sustainability, but has a long way to go until they can really earn the sustainable label below their products.

This is pretty simple. The majority of their jeans are made in countries that have very problematic labor laws. Most of their factories are in China, where there is almost no protection for workers. Most people who work in the denim manufacturing industry are women and young girls, so Levi’s has a part in contributing to gender disparities. However, having factories in China and Bangladesh is not Levi’s fault. They would be unable to compete with the rest of the denim industry if they produced all of their goods in the U.S where workers are fairly compensated and protected. One of the greatest challenges of creating a sustainable economy is figuring out how to maintain affordability for consumers while simultaneously making sure that the people who manufacture the goods also live a life of comfort. Levi’s could take it upon themselves and absorb the cost of paying their workers living wages, so the burden doesn’t fall on the consumers.