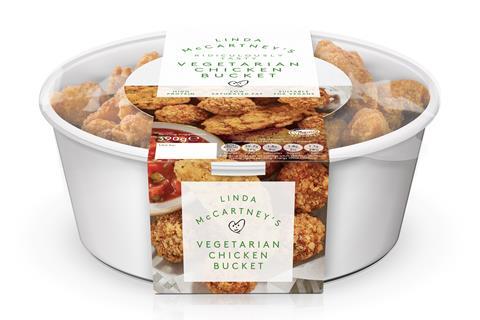 Overall, I think Linda McCartney has done a great job at creating an extremely realistic vegan certified Chicken Bucket - reducing the environmental footprint and ethical issues associated with the meat industry but creating a very tasty and accessible fast food. Despite being fairly unhealthy, they contain similar macronutrient content to real chicken nuggets. I think that the biggest positive of this type of product is that it makes plant-based diets much more accessible thus encouraging more people to forego animal products, by allowing people to give up meat for the environmental benefit without giving up some of their favourite fast food. However, the product and brand itself is not very sustainable for those interested in ethical consumption, so should only be consumed in moderation. Moreover, there are serious issues with the parents corporation Hain Celestial which really brings down the score of this product, due to its unethical and unsustainable practices. As a consumer I would think twice about buying products produced by this company until they are able to introduce more transparency and show greater commitment to their sustainability goals.

Additionally, the Chicken Bucket is much more expensive than regular chicken nuggets, so for those who are not in the socio-economic circumstances to afford expensive meat analogues and with consideration of the sustainability issues it may be better for these consumers to remain eating the meat version. However, in any case fast food should be consumed in moderation regardless, so I would recommend looking for alternative plant sources of protein which are less processed and much healthier overall.

It is important to commend Linda McCartney foods for developing a chicken alternative which is both tasty and realistic while being Vegan and Vegetarian Society approved. This is an important step in combating the significant environmental and ethical costs of poultry farming. When looking at the products website, it seemed extremely promising, stating that it takes “kindness seriously” and is “committed to protecting the world’s forest and wildlife”.
However, the primary ingredient of the chicken bucket is rehydrated soya protein. Soy protein is a fantastic alternative to meat protein and even compared to other meat analogues - it has high levels of energy, fiber, omega-3 fatty acids, as well as micronutrients like iron, zinc, and essential vitamins. Soybean also produces the most protein per hectare out of any crop. Soy can be produced sustainably. However, only 3% of the world's soy supply is sustainably sourced. However, soybean plantations are largely responsible for mass deforestation and ecosystem destruction in Brazil, creating monocultures which are extremely damaging, as well as unprecedented amounts of greenhouse gas emissions. The majority is farmed for feeding livestock (again pointing to issues with the meat industry), however, sourcing soy from unsustainable plantations only exacerbates the massive problem. Additionally, a majority of soybean is genetically modified, and the company has previously faced accusations for using GMO soybeans.
Moreover, while the Chicken Bucket does not contain palm oil, Linda McCartney’s other products such as her sausages do contain “sustainable palm oil” . However, the questionable validity of the RSPO certification and the dangers of biodiversity loss, deforestation, GHG emissions caused by the issues of palm oil production are an important consideration for McCartneys brand.
The protein content of the chicken-style pieces is very high, at 14.6 grams per 100. However, the fat content is even higher at 15%. However, overall this is similar, or only marginally higher than ready to buy chicken nuggets. On one hand, this reaffirms soybean chicken-like pieces as a valid alternative to chicken and as a fast food. However, it is not necessarily healthier and does have many of the negative impacts of fast food regardless of its vegan certification.

There is limited information about how the chicken pieces are made from Linda McCartney, but there is a common process for converting dehydrated soy protein into a chicken-like substance; converting soy flour to soy protein, it must then go through an extrusion cooking process which pushes the mixture through a cylinder, which leads to the creation of a chicken-like texture. One of the issues with this process is potentially large volumes of water being used in the extrusion heating process. However, the production process for soy analogue has the lowest level of GHG emissions when compared to other analogues such as those using wheat or nut proteins when looking at 100 grams or product or 100 calories. A Life Cycle Analysis of different meat analogues also finds that soybean meal products have the least impact on human health, ecosystems and resources, thus having limited impact on ozone depletion, climate change acceleration and ecotoxicity. However it also found that soybean meal analogues cause a more significant impact on natural land transformation (associated with unsustainable soya farming and agricultural land occupation.) It is also significant that the Life Cycle Analysis found that all forms of alternative “meat” products had much more sustainable production processes than any form of natural poultry/livestock farming. Of course, how it’s made also factors in the process of unsustainable soy farming such as decreasing biodiversity and emitting greenhouse gasses.

In 2007 Linda McCartney foods was bought by Hain Celestial. Despite the promising mission of sustainability of McCartneys brand and even the Hain conglomerate, the realities of Hain production is disappointing.
On the Hain Celestial website, it boasts that it pioneers a “Hain’s Healthier Way” - by undertaking a materiality assessment to identify sustainability risks, a review of the baseline of its current status, and developed a vision for how they will move forward. However, the overall promises in the sustainability report are quite vague, such as “Measuring and improving the social, environmental, and health impacts of our products”, “Supporting responsible sourcing”, “Supporting organic farming and GMO-labelling”. These are important steps to make, however further research seems to undermine these claims. Independent reviewers suggest that despite maintaining ethical labour practices with regards to workers rights, Hain does not have enough transparency in the supply line or their practices, getting very low scores on reporting and commitments to sustainability. The company has also faced multiple lawsuits over the last decade for falsely labelling their products (such as their soy milk, personal care products and seasonings) as organic. Furthermore, in 2015 it paid consumers $7.5 million dollars in compensation for mislabelling . Glaucas Research Group and Eurofins even found that many of the beverages and products contain extremely high levels of pesticide - largely above the US federal limits. Additionally, a recent scandal alleges that the company’s baby food contains extremely high undisclosed levels of lead and other heavy metals, despite being marketed as organic and nutritious. These scandals are extremely worrying and definitely raise a question mark about the claims that the company makes about its sustainable production and the organic produce used to produce Linda McCartney’s meat analogues. Finally, despite being located in California, Hain Celestial is registered in Delaware, a tax haven, which raises other ethical questions about its practices.