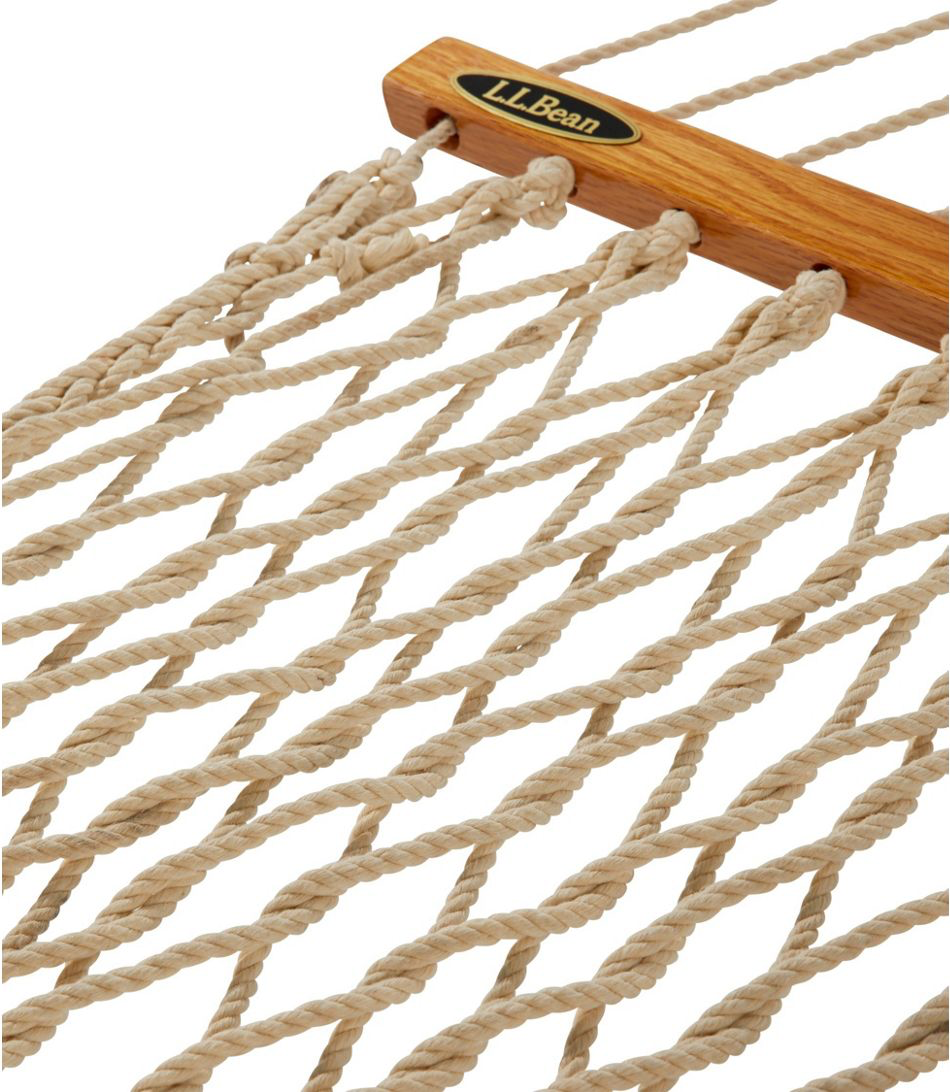 Overall, it is clear that LL Bean does not think its customers value sustainability or ethical labor very highly. The amount of information they present about their sourcing, production, and workers rights is very slim. They seem to be taking some initiative as far as the treatment of their workers and the factories they choose to work with, but the hard numbers and facts behind their decisions are simply not making their way to the public. Companies like LL Bean need to realize that consumers don’t need perfection, but they do need transparency. I think that this hammock is a fine product on its own, but I would not recommend it simply because of the ambiguity around how it was made and who it was made by.

The majority of the hammock is made of “moisture wicking DuraCord.” I could not find out exactly what goes into their duracord, but it seems to be a cotton-like material that has additives that prevent mildew, fading, and staining. The bars across the top and bottom of the hammock are made of weather-resistant oak, and the hardware for hanging the hammock is made of rust-resistant steel. I looked into DuraCord, but I could not find out exactly what its made of. I understand that the yarn for a hammock has to be treated in some way for it to last under outdoor weather conditions, but I wish they had told us what was done to it to give it all the benefits it has, and the impact that those treatments have on the environment and/or worker health. I have pretty much the same feelings about the oak - I understand that it needs to be treated to be water resistant but I wish they told us how they treated it. I like that they used steel for the hardware, as it is infinitely recyclable and had the strength to last a long time and extend this product’s life. Overall, yarn, wood and steal are materials that will biodegrade or can be recycled, so the base materials are not bad. I just wish they had more transparency in what goes into treating the wood and yarn.

There is very little listed about how this product is made. LL Bean touts many of its products as being made in the USA, but this hammock is not. In the product information section it simply lists it as “imported” with no indication as to where it was produced or imported from. LL bean does have a section on their website where they list every factory that they work with, domestic and abroad, but they do not tell us what products are made where, so I can’t be sure where this specific hammock gets made. This information would be really helpful in understanding the conditions the factories employees are likely working under or the carbon emissions involved in distribution. They do have an overarching manufacturers code of conduct with hard lines on minimum pay and overtime, but more vague statements on health & safety, discrimination, and environmental policy, and a vague auditing system. Their sustainability page shows that they have been making an effort to lower their carbon emissions in their US factories, but because this hammock was imported I have no information on its carbon outputs. Overall, LL Bean is majorly lacking in transparency in this area and need to hold their overseas manufacturers to the same standards as they do their US factories.

As far as the people who manufacture this hammock overseas, the lack of information of the factory its made in makes it hard to find out anything about the treatments of its workers. There is still the Manufacturing Code of Conduct that pertains to workers rights and pay, but they were vague about how their auditing system worked and so I cannot completely trust that these standards are in place. For their domestic workers, it is a bit of a different story. They have more information on company culture than actual employee benefits, and seem to heavily promote an outdoor lifestyle for their workers. While this allowed outdoor time is likely to lower stress and anxiety in their workers, some clearer information on other benefits they receive would be helpful. They also do make statements about diversity and inclusion within their company and in the charities they work with, but again the goals were very vague, and there was no hard action plans. Overall, more transparency is needed.