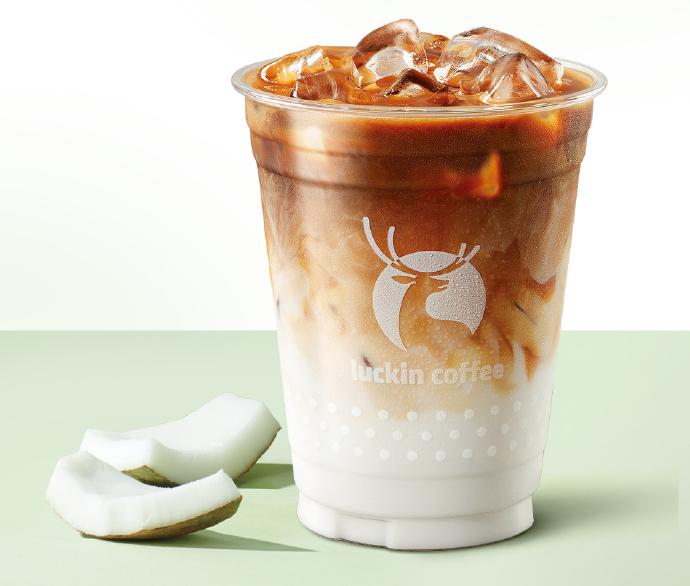 In recent days, office workers in China are reluctant to say “let’s grab coffee”. Instead, they say “let’s grab Luckin.” As Starbuck’s biggest competitor in China, Luckin coffee primarily targets office workers and goes out of their way to lower the price of their coffee, promote new coffee and juice products, and place more kiosks in each working district. Debuted in March 2021, the Luckin Coffee Coconut Latte is among the most successful new products of Luckin which became a trending topic nationwide. People love the bitterness of espresso which blends in perfectly with the sweetened coconut milk, adding a splendid flavor to this drink. Despite people’s frantic love for it, the Luckin Coffee Coconut Latte itself is not sustainable, and Luckin Coffee has a perennial issue with irresponsibility and fraudulence as a company. After research and conversations with Luckin’s staff members, I realized how little Luckin has done for the environment comparing to its size and market power and decided to refrain from purchasing their product.

According to Luckin’s official website, their Coconut Latte contains only brewed espresso, frozen coconut milk, and original-flavored syrup. The espresso comes from high-quality Arabica coffee beans produced from “top coffee producing regions” that are not further specified. In general, coffee farming and processing have a negative impact on the environment. Coffee farms with shade trees are best for birds and other wildlife populations. But the overwhelming majority of coffee is produced on monoculture farms, which reduces biodiversity. The World Economic Forum also says that intensive sun-grown coffee farms might also have pollination and pest problems, which increases reliance on pesticides and further perpetuates ecological degradation. Moreover, discharges from coffee processing represent a major source of river pollution, triggering the eutrophication of water systems. Apart from the coffee beans, the sourcing of the frozen coconut milk is also not displayed on the official website, while Luckin markets it as “directly from Southeast Asia” to make it seem healthy and unprocessed. However, people soon found out that the coconut milk actually comes from Feinuo frozen coconut milk, a local Chinese product that contains sugar and trans fatty acid. Excessive sugar may cause diabetes, and trans fats increase the risk of heart disease and stroke in addition to type 2 diabetes. Therefore, the not-so-sustainable sourcing of their product shows Luckin’s reluctance in information transparency and hints at fraud marketing.

The drink itself is directly assembled at every kiosk after being ordered. All of Luckin’s kiosks are open to public observation just like Starbucks and their sanitary condition seems to comply with government standards. Although the assembling process appears to be transparent, Luckin does not make further attempts to be more sustainable on its own. Prior to 2020, Luckin only allows pick-up orders, and all their drinks are poured into plastic or paper cups with plastic straws provided. In 2020, China passed a new environmental policy that banned the use of all non-degradable plastic straws in all coffee and tea shops, and Luckin quickly adapted degradable paper straws as replacements. However, they could have gone beyond that by encouraging people to bring their own mugs to the kiosks and offering them a discount. Till today, each Luckin kiosk consumes thousands of paper cups and cup holders, while producing an ordinary disposable 16-ounce paper cup requires 25.2g logs and 2.33L water. Only caring about revenue and efficiency, Luckin doesn’t recommend customers to bring their own mugs to the kiosk (according to the staff I talked to whom refused me to use a mug) and clings to all the disposable cups. It is shocking that while almost all other coffee shops in China are promoting sustainability, such as Starbucks, Manner, Fisheye, etc, Luckin fails to recognize its responsibility for the environment and the general public. This is extremely unacceptable considering its market size and profitability.

Luckin Coffee is a Chinese coffee chain founded in 2017 that labeled itself as “the pioneer of a technology-driven new retail model”. To differentiate itself from competitors, Luckin Coffee builds a cashier-free environment by developing mobile apps for ordering and accepting only delivery and pick-up orders. To attract its target consumers -office workers- Luckin mainly places its kiosks in office buildings and shopping malls, and the number of their kiosks have exceeded the total number of Starbucks in Jan 2020. However, even though Luckin has a considerable market size and profitability, it is still not compatible with Starbucks and many other companies when it comes to sustainable production and economic integrity. Luckin has never published any sustainability reports on their official platforms or cared to mention any ethical sourcing of raw materials. Moreover, it was caught fabricating sales and revenues on financial reports to make it stand out to potential investors after the company went public on the Nasdaq Stock Market in 2019. Shortly after that, Luckin published a faint statement and refused to make further responses. Personally, I would condemn Luckin because as such a large and influential startup company, Luckin has all the power to make some real impact in the industry and set out a standard for other firms to follow. Despite that, Luckin is now only looking at short-term profits but ignoring the negative consequences it may cause in the long term.