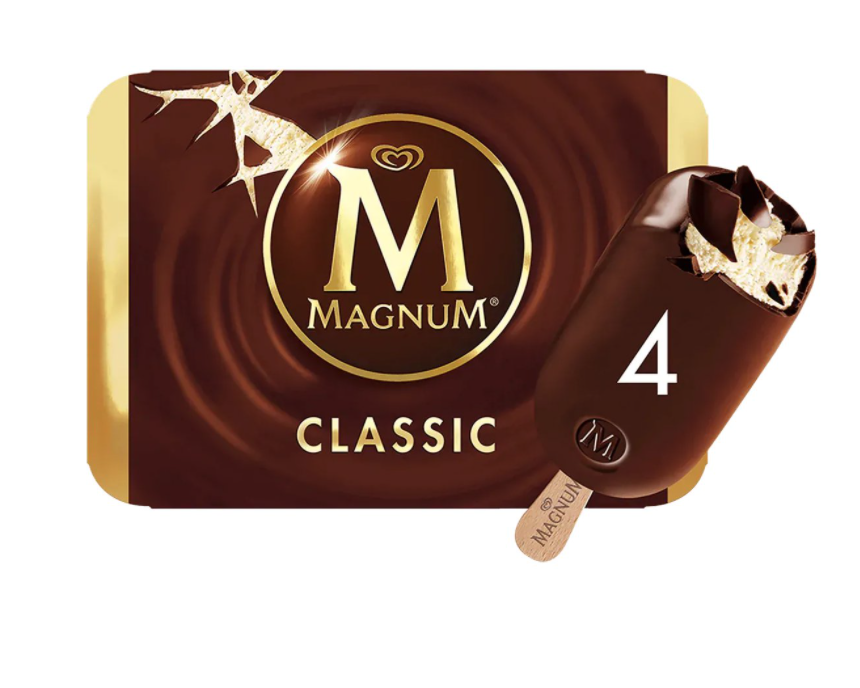 Magnum is a Belgium brand of ice cream which is found in most countries. Their main goals are to reduce their environmental impact and help build a circular economy. Overall, there’s little known in the manufacturing and sourcing process of this product, with no information to be found on working conditions and factory wages. Magnum has the potential to score higher if they were more transparent about their overall supply chain and if they embrace sustainable practices. I suggest consumers look into alternative ice creams, such as Hakuna Banana, for a more sustainable option.

Magnum clearly states on their website that they are committing to “respecting the environment” in the production of their products. The ingredients in this ice cream include buttermilk, cream, cane sugar, cocoa, glucose, vegetable oil, stabilizers, emulsifiers, and natural vanilla flavorings. They have worked closely with Symrise (a leading Vanilla supplier) to source their vanilla beans from the SAVA region in Madagascar (Sambava, Antalaha, Vohemar, Andapa). Symrise has a valid Rainforest Alliance Certification, ensuring their vanilla is sourced in a responsible and sustainable way. 98% of their cocoa is also sourced from Rainforest Alliance Certified farms in Ecuador and Ghana. They have committed to increasing this value to 100%, however, they have not said when or how they hope to achieve this goal. Fresh dairy and sugar are irreplaceable ingredients in this ice cream, yet there was no information about where these ingredients were sourced, or the labor practices and conditions for the farmers involved.

The exterior packaging is made from carton board, which is fully recyclable. However, the plastic wrappers for their individual ice creams are not recyclable. This is partly because the wrappers are made from non-recyclable materials, and in part because some ice cream residue may be left on the wrapper. Again, they state they are working towards reviewing the design of the wrappers, but there is no mention regarding when they hope to put in place recyclable wrappers. The wooden sticks are also not currently recyclable in the UK, however, I would recommend consumers instead compost the wooden sticks with their biodegradable waste. If this isn’t an option, popsicle sticks can otherwise be re-used for arts and crafts or as plant labels!

Magnum is a well-established company and is at the forefront of the ice-cream industry, however, I was quite surprised to find that there was a lack of information about their sourcing and manufacturing practices. The ice creams are made in the Heppenheim Factory, Germany, where more than 20,000 magnums are made per hour. Since the factory is very energy-intensive, they have implemented more efficient motors, with energy savings of over 60% by simply reducing their compressed air consumption. The new motors can be better monitored via a control panel, effectively increasing their energy efficiency across the production line.

However, Magnum is dealing with a large carbon footprint by sourcing ingredients across the globe and they have not addressed nor acknowledged their carbon footprint. There are also many challenges involved with the cocoa industry in Ghana. Many of these industries involve child labor, and in the most severe cases, child trafficking is used to take children to work on cocoa farms under slavery resembled conditions. Many farmers working in Rainforest Alliance Farmers have had their incomes increased, however, this does not mean that they are now well-paid, as many still face low incomes. Even though Magnum might not be involved with child labor or deforestation and degradation for cocoa plantations, they are still very ambiguous and vague in their sourcing processes. Therefore, by being more transparent, they could reassure consumers that these working conditions are not taking place on their farms.

Unilever and Nestle own Magnum. Larger corporations are likely to be involved in less sustainable practices. For example, Unilever is widely known for contributing large quantities of plastic pollution and has been involved with many ethical issues such as worker’s rights and animal testing. Similarly, Nestle has driven extensive deforestation (in some cases the deforestation was even illegal) in Ghana and the Ivory Coast for cocoa plantations. In the Ivory Coast, this resulted in their elephant population decreasing from several hundreds of thousands to only 200-400.

Magnum itself has contributed to some social responsibility and sustainability programs. For example, they founded the Vanilla For Change program, to support local communities in Madagascar. They reached 40,000 people from 76 villages, providing education, training programs, and health insurance. Magnum consumers are therefore empowering local people across the vanilla supply chain.