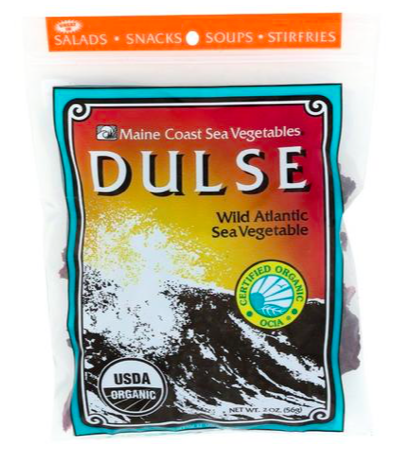 Maine Coast Sea Vegetables offers a range of wild sea vegetables harvested by hand from the Gulf of Maine. I was very impressed by their sustainable harvesting practices, which encourage regeneration rather than depletion of natural resources. While their products require a fair amount of plastic packaging, these sea vegetables are nutritious, sustainably produced, and the product of a small company that values their local community and environment.

This product contains no ingredients other than whole leaves of dulse, a red seaweed high in potassium, iron, and fiber. Sea vegetables in general offer a huge range of vitamins and minerals, provide a natural source of iodine, and have an extremely low fat content. They suggest snacking on the leaves whole or using them in salads, soups, stir fries, and sandwiches, where it can even act as a bacon substitute.Sea vegetables are considered to be a “food of the future” and are expected to grow substantially as our food systems continue to face environmental challenges. Seaweed takes carbon out of the ocean and helps with nutrient cycling in the water. It is also fast growing, and both wild and farmed seaweed require no fresh water, fertilizer, or land inputs.Maine Coast Sea Vegetables uses plastic packaging for nearly all of their products. Their website describes how they originally used paper bags when they only sold locally, but had to move to plastic as their operations expanded. Plastic keeps air and moisture away from the dried sea vegetables, thus preventing spoilage and increasing shelf life. For some small packages, such as the 2 oz bag used for this product, they use biodegradable pouches coated with an additive from ECM Biofilms that allow the packaging to break down in anywhere from 9 months to 5 years. However, these are not bioplastics, so they presumably still degrade into the same harmful microplastics as conventional plastics. The amount of plastic necessary to sustain this business is unfortunate, though I understand that there may not be many other practical, affordable options given the nature of the product. On their website they mention an interest in newly developed bioplastics made from seaweed, but offer no specific plans to change their packaging at this time.

Because Maine Coast Sea Vegetables is not a farming operation, sustainable harvesting has been integral to the success of their business. They employ a “slow growth philosophy” that involves “leaving more than we harvest, producing more than we consume, and giving back more than we take.” They harvest enough from the beds to promote regeneration, but not enough to deplete the resource, which has allowed them to harvest from some of the same areas for decades. Dulse is a popular product, but it requires very specific growing conditions. One of their blog posts specifically explains that consumers may face shortages because harvesting enough to meet demand could jeopardize its regeneration and the fishing communities that it sustains.Because their products are harvested from the wild, Maine Coast Sea Vegetables field many concerns about pollution and heavy metal contamination. Their National Organic Program certification guarantees that their products are harvested away from major sources of contamination such as marinas and aquaculture sites, and that no chemicals are used in their processing. They test their products both annually after harvest and continually throughout the year, using methods approved by the EPA and FDA. They test for microbes, pesticides, petroleum residue, heavy metals, and radioactivity, and publish their annual test results on their website. Their ultimate consensus is that any trace amounts of heavy metals in their products are not a concern because of small portion sizes and low bioavailability, though they offer a wealth of information online so any consumer can make their own informed choice.

Maine Coast Sea Vegetables employs a relatively small staff and is entirely employee owned. Founded in 1971, sustainability has been key to their success over the past 50 years. Most companies talk about sustainability as something that will be important at some undisclosed point in the future, when they need to worry about a lack of resources to create their products. However, at this point in time, most can (and do) operate unsustainably and still grow their business. With wild sea vegetables, if you take too much of a species one year, it won’t be there next year. They are required to prioritize long term viability over short term profit. The only non local product they sell is nori sushi sheets from a family owned farm in China, which they decided to include after consumers requested them and they could not make them from their local Maine species. They also act as a vendor for other local seaweed brands like Cup of Sea (tea) and Dulse & Rugosa (shampoo bars). In one video profile from 2010, cofounder Shep Erhart mentioned that while they sell to places such as California and Europe, their long term goal was to keep their product as local as possible and feed their own local people. I was very surprised to hear this, as most companies that start out small aim to expand the range of their products, not limit them. While I can’t say exactly where they stand on this goal 10 years later, their shipping page states that they currently only ship within the United States and Canada, not to any other countries. Overall, I feel that Maine Coast Sea Vegetables is a shining example of how a sustainable, local business can thrive.