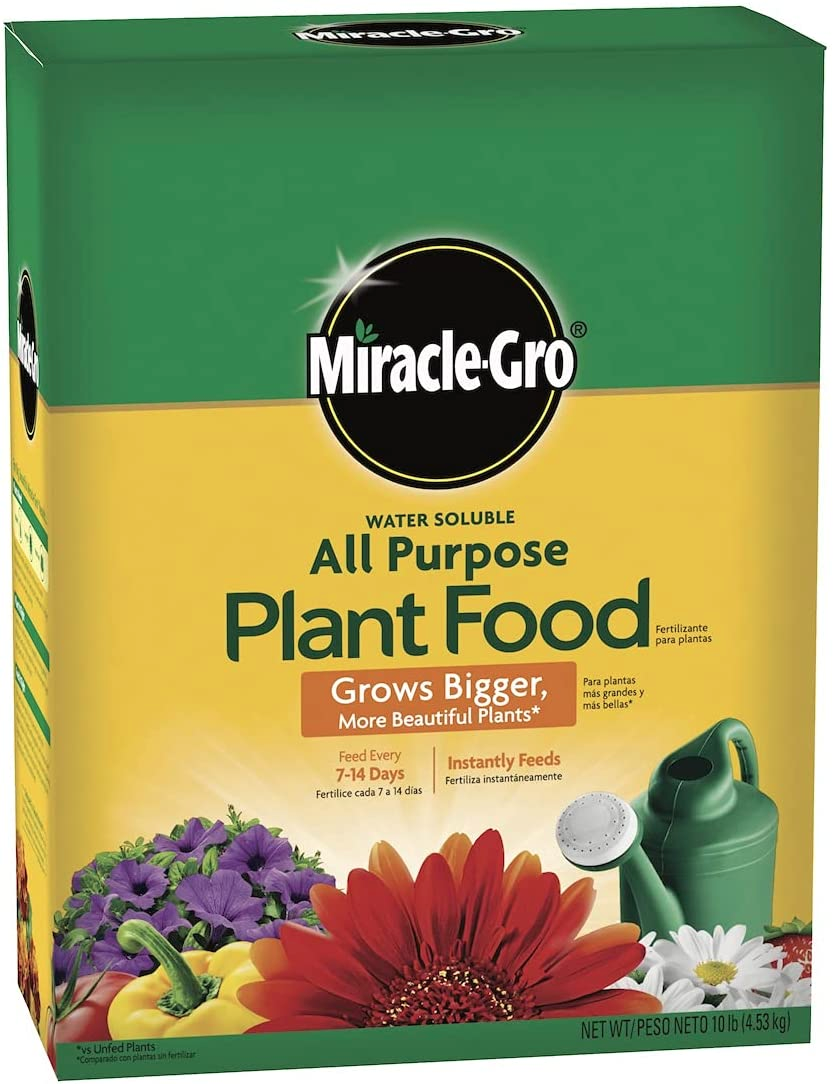 Miracle Gro Plant food is a synthetic fertilizer made by Scotts-Miracle Gro. The company has tremendous profits, earning 1.83 billion dollars in revenue last quarter. Their success does not reflect the quality of fertilizer they sell, unfortunately. From the gas intensive techniques used in manufacturing, to their lack of safety concerns when it comes to their customers, it all comes down to the point that their “Plant Food,” is known to degrade the soil it is placed in, and harms the watersheds that it pollutes. Miracle Gro’s literature underlines consistently that they strive for plant health and education on gardening. This goal is tarnished by their shortsighted and harmful fertilizer, as well as their overall lack of transparency covering their practices.

Miracle gro contains 24% nitrogen, 8% phosphorous, 16 % potassium. The formula is heavy in salt, which is harmful to microbes that live in the soil and aid plants in accessing the nutrition in the soil. This makes it very difficult for the soil to sustain itself without a continued use of fertilizer. Primarily, plants require nitrogen from soil, and Miracle Gro provides nitrogen derived from synthetic ammonium and water soluble nitrates. The fungi, bacteria, and worms will eat and break down the extreme spike in nitrogen, but once it is gone, the habit of large feasting continues by the microorganisms consuming the carbon stored in the soil, effectively removing it from it’s storage and allowing it to enter our atmosphere after the organisms life cycle. The rest of the percentages consist of other minerals such as zinc, copper, and magnesium, to stabilize the otherwise dangerous effects that pure elements could have.

After the usage of fertilizer, its ingredients cause many health and ecological problems in America and globally. During rain, the fertilized soil containing high nitrogen levels run off into streams and eventually make their way into the ocean or lakes. This causes algal blooms which block sunlight and kill fish, creating famously known “dead zones.” Groundwater is the primary source of drinking water for rural America, as well as many other areas in the world. Contaminated water caused by fertilizer runoff causes many health problems in these communities such as blue baby syndrome, cancer, diabetes, thyroid conditions. It’s important to note that this occurs most in places where fertilizer is used on large, commercial scales, but using a fertilizer that I know will cause harm to the Great Lakes, where I live, is not worth it to me. I would much rather use an organic fertilizer, such as compost.

Scotts Miracle-Gro provides no information on their ingredients save for the proportions of nutrients. I find this as a huge misstep, as many gardeners care about their gardens, and want what is healthiest, rather than what will grow the largest plant.

Scotts Miracle-gro has no information at all about how it’s made so I’ll describe the industry standard technique. The ammonia is used to provide a solid form of nitrogen. It’s made by natural gas and steam being pumped into a vessel, then pumping air to increase the pressure, and removing oxygen by burning the natural gas and steam. All that remains is the nitrogen, hydrogen, and carbon dioxide. The carbon dioxide is removed and they use an electric current to create the ammonia and nitric acid. This process is so heavy in resources, from the steam, to the gas, to the electricity, and is just the beginning.

I could not find where their factory is, where their oil is sourced, and other variables that can tweak the carbon emissions of a manufacturing process. It is unfortunate that Scotts has no published commitment to lowering the natural resources needed to produce their products, as well as neglecting to publicly post an end-of-year summary on their energy outputs to better educate their customers.

Monsanto and Scotts Miracle-Gro have a long standing partnership. Scotts is the exclusive marketer of Monsanto, and has been quoted to saying that they would lose substantial future earnings if they were to divest and end this partnership. 5.5% of their current sales are due to Monsanto. Monsanto sells genetically modified organisms as a solution to the hunger crisis, which harms both the profitability of small farmers and the health of those who work the fields. The increase in farmer debt due to the expensive prices of GMOs and Monsanto tech, and lowering prices of produce has shown an increase of suicides of farmers globally. To personally help in this crisis, try buying local, organic, produce at your farmer’s market.

Scotts also pled guilty in 2012 to illegally applying insecticides to wild bird seed that are toxic to birds to enhance the shelf time the seed would have. This was done knowingly, as employees warned Scotts management, and they continued to sell a total of 70 million units of bird food illegally over 2 years. This investigation also uncovered that Scotts was distributing and selling cancelled, unregistered, or misbranded pesticides (including those that inadequate cautions). They could be even more directly responsible for accelerated algal blooms or heightened cancer rates due to the distributions of these bags with inadequate instructions and warnings of the dangers of the chemicals. These examples show an upper level management that consistently puts their bottom line above the safety of their consumers and environment. Miracle-gro is a product that was birthed from a company that cares about one growth: not their community or a carbon sink, but their profit.