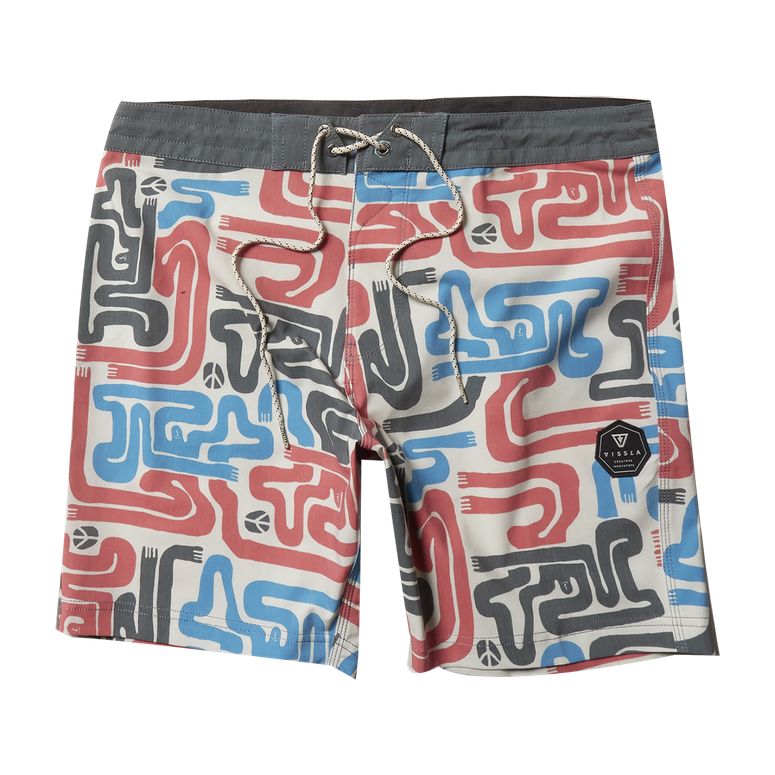 Vissla is a sustainability-focused surf brand that introduced the More Mate Less Hate boardshorts as an environmentally-friendly alternative to classic boardshorts with its usage of both recycled and upcycled fabric material. The material used in the boardshorts earned Vissla a high rating as it features a creative reuse of waste, however, the company could be more transparent in providing information such as what factories are producing their apparel and how ethical their labor practices are. Overall, the boardshorts are a good purchase for surfers and swimmers with their light environmental impact and are innovative in their approach to sustainable material use.

Thirty-six percent of the fabric of the shorts is made of Cocotex, which is an activated carbon fabric and is composed of the outer husk of a coconut (typically thrown out as waste as it is inedible). Thirty-four percent of the short material is recycled polyester known as Repreve, which is made from plastic bottles. Both of these materials repurpose old products and divert waste from landfills, which otherwise accumulate trash and emit greenhouse gases. For some context, the fashion industry already contributes to the emission of 2.1 billion tons of greenhouse gases per year, so any move towards less waste in landfills benefits the environment.
Unfortunately, ten percent of the short material is made from spandex, which is one of the most environmentally detrimental fabrics due to the incredibly long amount of time this synthetic material takes to degrade. Harmful synthetic microfibers are also released from spandex into the environment, and their production is highly processed with the excessive use of nonrenewable resources. Additionally, twenty percent of the fabric is made from cotton, which has negative environmental impacts from the start to end of its life cycle. However, the usage of spandex and cotton is minimal (around one-third of the material) compared to the use of recycled fabric in the shorts, and is overall a step forward from the material used in traditional boardshorts.
The boardshorts are also coated in PFC and Fluorocarbon-free DWR water repellent coating. In the past and currently, boardshorts have been coated in these chemicals to repel water at the expense of the environment, where over time the release of the chemicals from the fabric harms the health of sea creatures by manipulating their reproduction and hormone systems.

Boardshorts are typically sewn in factories where they are mass-produced. As Vissla does not provide details on the website about its production practices, it can be assumed that these boardshorts are created similarly to those of most large apparel brands, which is not notably sustainable. Factories handle production practices once given clothing patterns, and while it is not yet a standard to require sustainable initiatives such as zero-waste clothing patterns that do not result in fabric waste or renewable energy powered buildings, these are some examples of what a high rating brand could incorporate in how their products are made. Vissla does, however, ship apparel in one-hundred percent recycled poly bags that are also reusable and recyclable. The hangtags are also made of recycled material, which allows a higher rating for the brand’s environmental impact.

As Vissla does not provide details on which factories produce its apparel, it is unclear how ethical the brand is in terms of labor practices. Certifications such as Fair Trade, which ensure that businesses are conducting responsible and sustainable practices, are not mentioned despite the usage of coconut husks and their sourcing from coconut farming. Due to the lack of transparency from Vissla and the difficulty in determining whether the brand supports unfair or unethical labor practices, the brand does not earn a high rating in this category.