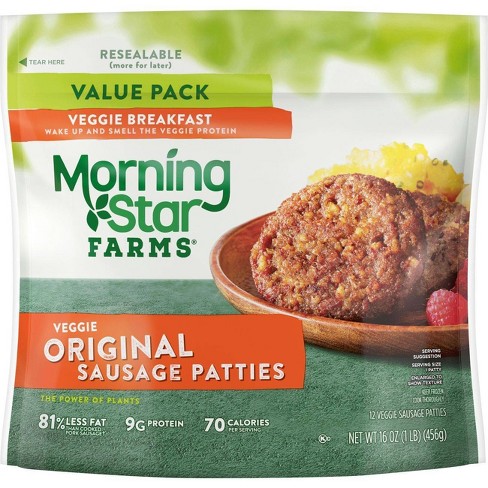 Morning Star Farms makes plant-based alternatives to a variety of different meat products, including sausage patties, bacon, burgers, chicken nuggets, and more. They are a division of the Kellogg Company and have been around since 1974. These sausage patties have been a big part of my diet since trying to eat more plant-based, so I was curious about just how sustainable this brand and product really are. I was disappointed to discover that Morning Star is not very transparent about the sources of their ingredients, which made it difficult to be able to fully determine the sustainability of this product based on the ingredients within it. However, I was pleasantly surprised to learn about Kellogg’s sustainability efforts, including its ambitious goals to switch to renewables, and was also impressed with Kellogg’s human rights efforts and labor practices. Despite all of these positive achievements, I know that Kellogg’s and Morning Star can do much better and, therefore, expect even more ambitious sustainability goals in areas such as packaging and, of course, more transparency.

Morning Star’s Veggie Sausage Patties are mostly made of water, wheat gluten, soy protein concentrate, vegetable oil (corn, canola, and/or sunflower), soy flour, and soy protein isolate. They contain 2% or less of maltodextrin, methylcellulose, yeast extract, salt, fruit juice, natural flavors, spices, sugar, potato starch, konjac flour, onion powder, and soy sauce. Morning Star is not very transparent about where they get their ingredients, so I will be reviewing each ingredient on a general level. Wheat gluten is a sustainable ingredient because it does not use large amounts of water, emits little carbon, and does not significantly damage the environment. Soy protein concentrate, soy flour, soy protein isolate, and soy sauce are all produced using soy, which is a crop that can have harmful consequences on the environment. Growing soy leads to deforestation, threatens biodiversity, causes soil erosion, and requires large amounts of water. It is hard to determine whether or not the vegetable oil used by Morning Star is sustainable without knowing its source. However, if it’s not organic or fair trade, then it’s most likely not environmentally friendly. For example, canola oil uses GMOs and sunflower oil requires large amounts of water. Maltodextrin is a food additive and preservative that is relatively sustainable since it has a low water and carbon footprint and does not significantly damage the environment. Methylcellulose is another food additive that seems to be relatively sustainable. Yeast extract is also a sustainable ingredient due to its low carbon and water footprint and its minimal impact on the environment. It is likely that the salt used in this product is produced through solution mining, which involves digging a well into an underground salt deposit and using lots of water, making it an unsustainable ingredient. Fruit juice, natural flavors, and spices are all extremely vague, making it very difficult to determine these three ingredients’ sustainability without more information. Sugar is a crop that requires lots of water and fuels deforestation, making it another unsustainable ingredient. Potato starch and konjac flour are both sustainable since they do not require large amounts of water, have relatively low carbon footprints, and do not significantly damage the environment. Onion powder, which is made from dehydrated onions, is a sustainable ingredient since it has low water and carbon footprints and poses no significant threats to the environment. While more of the ingredients in Morning Star Farms’ Veggie Sausage Patties are unsustainable than not, they still do have a decent amount of sustainable ingredients. In the future, it would be helpful for Morning Star to be more transparent about where they source their ingredients in order to better understand their sustainability efforts.

Morning Star does not give any information as to how their Veggie Sausage Patties are made or about the manufacturing processes behind their production. However, Kellogg’s, Morning Star’s parent company, has set the goal to use 100% renewable energy by the year 2050. They have already started setting and achieving smaller goals in order to reach their intended target. For example, since 2015, their greenhouse gas emissions have been reduced by 20.7%, surpassing their original goal of 15%. Kellogg’s has also set short-term goals in order to achieve a reduction in emissions by 2030. This makes me feel confident that Kellogg’s is truly willing and able to achieve 100% renewable energy by 2050, and it seems like this statement is not performative or out of reach. Currently, 28% of electricity use in Kellogg’s facilities comes from renewable sources. Morning Star also says that they are trying to achieve more sustainable packaging. However, resealable and recyclable bags that are safe for food do not currently exist in the frozen foods category. Therefore, the packaging for Morning Star’s Veggie Sausage Patties is not recyclable. Morning Star is partnering with other organizations to stay on top of the research into more Earth-friendly packaging solutions and they are exploring options like packaging made from recycled or renewable sources. While it’s good that they are committed to researching new solutions regarding their packaging, Morning Star still has a lot of work to do in this area if they want to become more sustainable. While they still have a long way to go, I am overall very impressed with a lot of Kellogg's and Morning Star’s sustainability efforts and appreciate the transparency and evidence that they use to show consumers their commitment to sustainability.

Morning Star was introduced by Worthington Foods in 1974, and was later bought out by Kellogg's in 1999. It was one of the first companies to introduce Americans to the use of soy as a base for meat alternatives in an attempt to turn people away from animal protein consumption, which helps to save water and land and results in reduced carbon emissions. While Morning Star does not specify the sources of their ingredients, Kellogg’s has lots of initiatives in place that illustrate their efforts to support and care for their farmers. They help farmers and workers improve climate resilience, enhance biodiversity, improve livelihoods, and help address human rights and equity. They provide training and technical assistance and share best practices that improve farm productivity, regenerate soil health, protect species and habitats, and reduce greenhouse gas emissions. They are committed to support 1 million farmers and workers through programs focused on climate, social, and financial resiliency by the end of 2030. Through 2019, they have supported more than 433,000 farmers, including 13,270 women and 32,605 smallholders, around the world. Kellogg's is also working to advance their human rights efforts by taking several actions, including improving reporting and tracking of human rights issues through an Ethics Hotline digital app, conducting ongoing assessments of human rights risks across their supply chain, and educating and engaging employees and suppliers on human rights issues through company-wide training. Overall, I am pleasantly surprised and extremely impressed with how much Kellogg’s has in place to support their farmers and human rights efforts. In the future, I would like to see Morning Star be more transparent to their consumers about the sources of their ingredients because it will help bring to light the treatment of their workers across the whole supply chain.