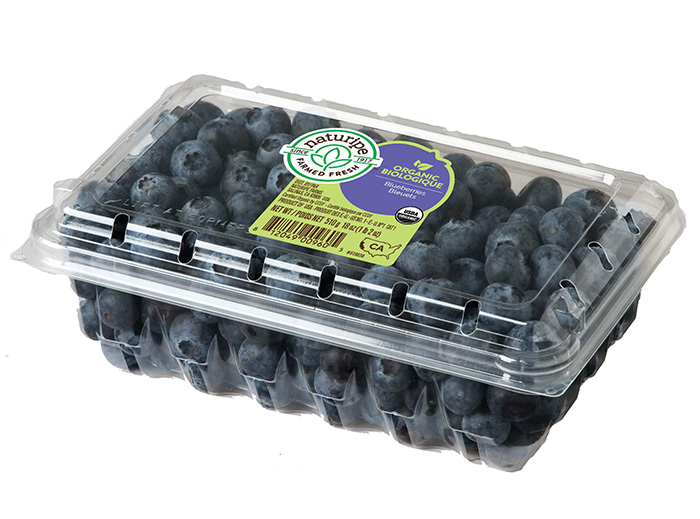 Naturipe is the largest producer of organic blueberries in the world. Despite the environmental impacts of operating at such a large scale, Naturipe integrates some sustainability into its business by adhering to organic farming standards and innovating its packaging design. Organic products are an increasingly popular choice compared to conventional products, and for good reasons. Organic means that food is grown in a way that reduces greenhouse gas emissions, pesticide use, water pollution, and soil erosion. Naturipe organic blueberries are a good option compared to any conventionally grown blueberries, although blueberries from local, regenerative farms provide the greatest health and environmental benefits.

Naturipe organic blueberries contain vitamin C, manganese, and fiber, all of which boost human health. While these blueberries are certified USDA organic, there may be small traces of pesticides on the surface of the fruit because the USDA allows for the use of a select number of pesticides on organic crops. Pesticide use on organic crops is a last-resort pest management method for Naturipe farms, so there is a very low risk that consumers will purchase organic products with traces of pesticides.

Naturipe’s plastic packaging is made primarily from rPET (recycled PET) as well as virgin PET. The term ‘primarily’ is quite vague, so I would like to see Naturipe clarify the specific percentage of rPET used in its clamshell packages. To further reduce its need for virgin plastic, Naturipe has begun using compostable packaging for some of its organic products. Plant-based materials have the lowest end-of-life footprint because they do not produce any waste as long as they are composted. I have yet to see these compostable packages in stores, but I understand that it takes time and money to find a supplier for new materials, install the necessary machinery, and train staff at each of its packaging facilities. Naturipe’s containers are labeled with a map icon indicating where the blueberries were grown as well as a How2Recycle label to encourage consumers to recycle the packaging post-use. Map icons provide consumers with some transparency about what they are purchasing, but Naturipe can take this one step further by including a QR code that shows consumers the farmers who grew the berries. Compared to other companies that package their products in single-use plastic, Naturipe stands out for using rPET and compostable materials due to its own initiative and not because of external pressure.

Naturipe organic blueberries are grown from several farms across North and South America to ensure that the fruits are available to consumers year-round. Transporting the blueberries from other countries to the U.S. is the most carbon-intensive step in the product’s life cycle. Adhering to organic farming practices allows Naturipe to reduce its environmental impact because organic farmers must cultivate their crops in a way that builds soil health, reduces resource consumption, and preserves biodiversity. Farmers support soil fertility through cover crops, crop rotation, and manure. Cover crops and crop rotation are also mechanisms of deterring pests and thus avoiding the use of pesticides. Naturipe farms follow the PAMS pest management strategy: prevention, avoidance, monitoring, and suppression. All farms must prioritize methods to prevent, avoid, and monitor pests before resorting to pesticides allowed by the USDA. Minimizing pesticide use protects worker health and reduces water pollution, although preventing the use of any pesticide would be the safest practice. Naturipe farmers use drip irrigation systems to water their blueberry bushes, saving water and time. Another important practice at Naturipe farms is the creation and/or conservation of natural habitat along the borders of fields. These strips of habitat serve as corridors that connect wildlife populations and filter runoff from the fields. Organic farming results in a 40% reduction in carbon emissions and an increase in yields during poor growing conditions, whereas conventional farming releases more greenhouse gases than it sequesters.

While organic farming is certainly more sustainable than conventional farming, it has its limits. As the largest producer of organic blueberries, the scale of Naturipe’s organic farming is inherently unsustainable because the berries must travel long distances to reach American consumers. In addition, organic farming does not produce nearly as many environmental benefits as regenerative agriculture. I would like to see Naturipe publish some goals for its farming practices because, without any published objectives, I do not know if the company plans to continue to improve its environmental performance.

Once Naturipe organic blueberries have ripened, they are collected either by hand or through machine harvesting. Workers then sort the fruit and conduct quality checks before the berries are machine-packed into plastic containers. Naturipe is working to innovate the design of its plastic packaging by using heat seal technology to reduce its plastic use by up to 50%. Heat seal technology replaces the lid of traditional clamshell containers with a thin layer of plastic sealed over the edges of the container. By using primarily rPET to make its containers, Naturipe reduces emissions associated with fossil fuel extraction. I am excited to see that Naturipe has introduced the use of compostable packaging for its organic products because this transition shows that the company has the drive to actively transition away from its reliance on plastic packaging.

Naturipe is a partnership between Hortifrut, MBG Marketing, Naturipe, and Munger Farms, four berry growing organizations located in different parts of North and South America. These partnerships supply the company with fruits from dozens of farms, allowing it to operate as a large-scale producer. Naturipe emphasizes that sustainability and safe working conditions for its employees are two integral values of its business. One of Naturipe’s first initiatives to showcase its values was the establishment of the Charitable Giving Fund, which has funded a variety of programs that support the health and education of Naturipe’s workers since 2012. To further ensure that Naturipe’s values translate to action, the company uses third-party auditors to check the working conditions of its facilities and farms at random. However, these audits are only so effective at enforcing humane labor standards. In 2017, farmworkers filed a lawsuit against Sarbanand Farms, a supplier for Naturipe, following the death of farmworker Honesto Silva Ibarra. Managers' threats and hostility forced Ibarra and others to work long hours with few breaks or other additional benefits. The stress of his working conditions and other factors contributed to Ibarra’s death and exposed the true nature of the farm’s conditions that workers had been too afraid to speak up about. Following the lawsuit, Naturipe supported Sarbanand Farms’ FairTrade certification, which established secure benefits and protections for farmworkers. I am hopeful that Naturipe has learned from this tragic incident and has fortified its standards for its farming conditions because the company’s intentions are sincere.

As for the company’s environmental initiatives, Naturipe needs to increase its transparency and take action to go beyond its current sustainable practices. Growing organic crops is a great start, but Naturipe still sells conventional fruits that are grown in a way that results in more harm to human and environmental health than benefits. Additionally, Naturipe’s large scale of operation produces large amounts of transportation-related emissions that the company should try to reduce or offset. Another opportunity for growth that I mentioned before is the establishment of goals to encourage Naturipe to continually improve upon its performance. Overall, Naturipe’s efforts towards improving its impact are a great starting point that the company should continue to build upon.