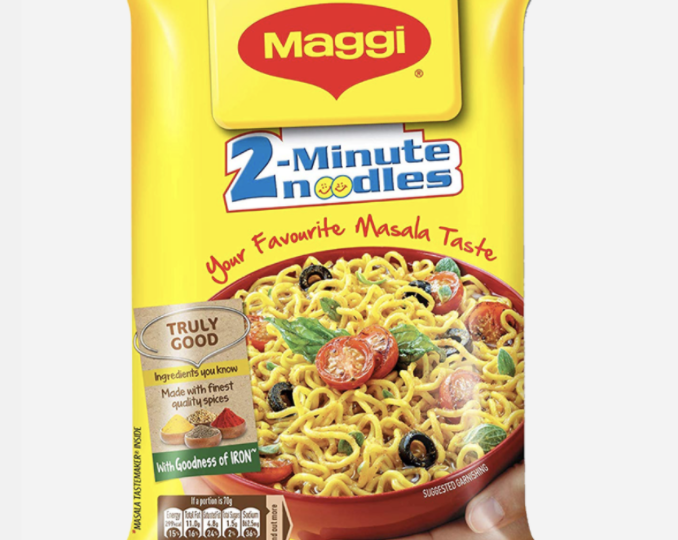 ‍
Nestle as the behemoth it is today has interesting ideas for its future, but has not put its ‘money where its mouth is’. Nestle is so entrenched in the food ecosystems of many developing countries as a provider of very cheap, delicious, and somewhat-nutritious foods (such as Maggi and Milo), that there is a certain inertia in causing any rapid change to the status quo. As consumers of Maggi Masala Noodles and other Maggi® products, it has become an intrinsic part of our cultures and cuisines. However, I think there is a chance for innovation and corporate willpower to make more consistent, transparent, and incremental changes to the logistics of Maggi’s operations as long as we consumers push for it as a ‘need’ and not a ‘want/nice-to-have’.

INTRO:  Maggi Masala Noodles is a product under Nestle’s Maggi® Brand that is sold all over the world in six continents. Maggi Masala Noodles are particularly prevalent in countries in South Asia and Southeast Asia (as well as their respective immigrant communities in the West) and the Maggi® brand’s special 'tastemaker' seasonings have an even broader reach (Latin America, Asia, Africa, etc). The Maggi® 2-Minute Masala Noodles are well known for their affordability, nutrition (high iron, iodine, vitamin A, and zinc content), short cooking time, and delicious taste, which has led to it becoming a memorable comfort food for many long-time consumers.

PACKAGING:  Maggi® Masala Noodles are typically sold in yellow plastic packages. The plastic has the ‘recyclable’ logo, but it is the ‘category 7’ version, which represents various possible resins that don’t fit into categories 1~6. Usually, the resins in ‘category 7’ are found in electronics and automotive housing parts (which are usually not accepted by local recyclers), so it is uncertain whether the packaging is truly ‘recyclable’ in most countries (especially considering Maggi is mostly consumed in developing countries). Regardless, Maggi cannot merely have a one-and-done ‘recyclable’ logo as the solution to its waste problem since developing countries do not have exhaustive recycling systems for even basic plastic recycling. Nestle’s ‘ambition’ to have 100% recyclable/reusable packaging by 2025 does not strive to solve the plastic garbage pileup issue, but rather clear responsibility off of Nestle for any un-recyclable plastic packaging. However, Nestle has been trialing a ‘Maggi Wrappers return’ scheme in two Indian cities since 2018 wherein returning 10 empty Maggi Masala Noodles plastic wrappers will result in one free Maggi Masala Noodles packet. As consumers of our favorite meal, let us advocate for Nestle to put more investment/resources into dramatically scaling this interesting initiative as a means of preventing plastic pollution in their developing country target markets. Currently, it looks like more of an ‘experiment’ than a precursor to an ‘innovative Nestle sustainability initiative’.

‍
The most concerning ingredient out of this list (that I would like to focus on) is Palm Oil, due to the havoc its production causes to the environment. Harvesting Palm Oil on the scale our society demands it equates to massive deforestation (deforestation the size of Germany) that leads to the loss of animal habitats (especially near-extinct ones like Orangutans) and worsens climate change because burning rainforests (to replace them with palm oil plantations) releases carbon into the atmosphere. Unfortunately, there are very few cost-prohibitive alternatives to Palm Oil that Nestle can use, so it is understandable why it is on this ingredient list. This is because Palm Oil’s low price allows for greater affordability and Palm Oil’s high smoking point allows for the Instant Noodles to be heated to levels that give Maggi the satisfying texture we all know and love. However, there is a solution to have Maggi Masala Noodles’ Palm Oil be RSPO certified (by the Roundtable on Sustainable Palm Oil). Nestle says it has instead ‘consulted’ with RSPO to strengthen its own company standards against deforestation, but as consumers, it is important we push Nestle to come up with a proper incremental, yet expansive & transparent plan for responsible Palm Oil production (just like they finally did with their ‘Nestle Cocoa Plan’).

As seen in many Nestle products, there is not much company-induced numerical transparency on the emissions/sustainability of the supply chain, factory operations, and general production process of Maggi Masala Noodles-producing factories. With Maggi (and Nestle) selling in stores all around the world, it is likely the emissions from shipping are particularly large. This is especially considering the Maggi-loving immigrant communities in the West who enjoy the convenience of imported Maggi Masala Noodles at their local Asian grocery stores. I agree, it can be really tough to think from how far away a Maggi packet has come to land in our bowls! For many, Maggi is a memory of childhood or home.

‍
In India itself, eight Maggi Masala Noodles factories produce for a country of 1.3+ Billion potential consumers (and their 90% market share), so regularly getting Maggi Masala Noodles to stores and markets around the country produces emissions in its own right. In 2019, Nestle moved to invest more in the Indian target market by creating its ninth Maggi factory. This is good as it further reduced the need to import additional Maggi Masala Noodles from other countries’ factories. Furthermore, this new Maggi factory is represented as very environmentally sustainable. However, this implies (and we might have to assume so due to lack of transparency) that the other eight Maggi Masala Noodles factories have not been retooled to these same standards. We tend to hear (with large companies like Nestle) about putting one factory on the pedestal to hide the reality of the rest.

Once again, there is not much company-induced transparency on what goes on in Nestle factories and how workers are treated. Particularly for Maggi Masala Noodles-producing factories in India, when Maggi was banned for six months due to potentially unacceptable lead levels, 1100 outsourced contractural workers lost jobs at a Uttarakhand Nestle factory. This represents Maggi’s unwillingness to commit to its workers long-term even when they had a strong market share of 90% in India’s Instant Noodle market and strong consumer demand from all us Maggi lovers. The extent of contractural short-term workers in other Indian Maggi factories and Maggi factories in other countries is unknown.  Furthermore, both contractual and non-contractual workers are reported to toil around the clock for half the average Indian income to produce the innumerable Maggi packets we consumers enjoy. It is once again unknown what medical and labor practices Nestle’s factories employ since they are not transparent about them, which might imply intentional opaqueness due to deferring to weak local labor standards.

‍
It is important to understand that Maggi, as a product with nutritional benefits, relies on low prices to be affordable in the developing countries it focuses on. When we engage in purchasing our consistently affordable and tasty Maggi noodles, we should be aware of the processes behind this at the very least. At the same time, we have no idea whether pushing for increased labor standards gives Nestle prohibitive costs or rather Nestle is just trying to over-stretch their profit margins.