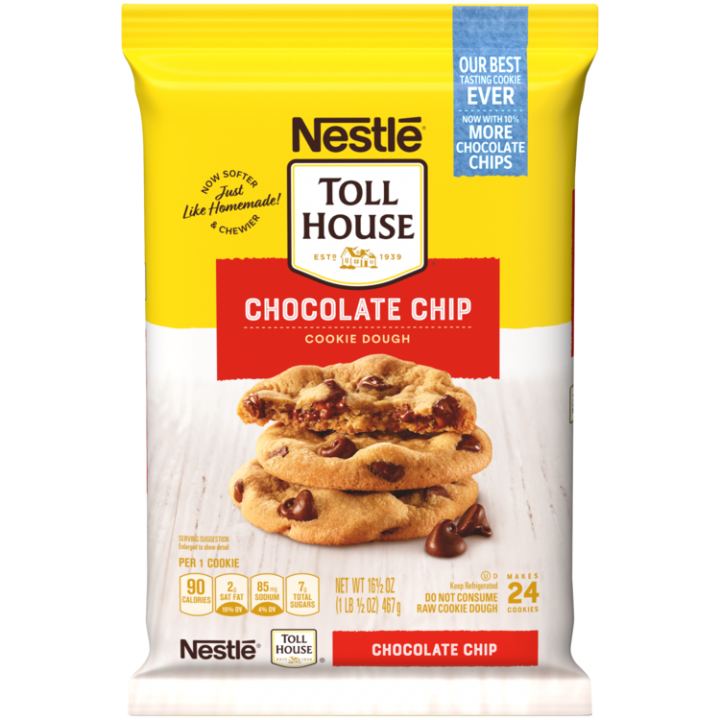 When someone says chocolate chip cookies, I usually think of the Nestlé Toll House recipe, which is a classic American dessert. While Nestlé, a corporation with “Good food, good life” as its tagline, seems to be striving to reduce its environmental impact, Nestlé sources some of its chocolate from cacao sites that use child labor, a massive downfall for this product. Nestlé is transparent about its child labor practices and has developed the Nestlé Cocoa Plan to reduce childhood poverty, child labor, and deforestation, elements that it believes will reduce youth exploitation in the cacao industry. I found it difficult to assess whether this product was sustainable as Nestlé does not provide any information on the labor sources, environmental impact, and ingredient supply chains of Nestlé Toll House Chocolate Chip Cookie Dough, which detracted from the high social and environmental values toward which the company is working.

Within the planetary realm, the corporation aims to engage in “responsible sourcing” of their ingredients, so the company can help the world create more resilient food chains, support large and small food producers, and leave a minimal impact on the environment. I could not find any information on the sources, environmental impacts, or labor of the ingredients in Nestlé Toll House Chocolate Chip Cookie Dough specifically, so my analysis of the sustainability of the cookie dough’s components comes from the company’s statements on their ingredients as a whole.

The first ingredient, wheat, makes up the greatest proportion of this refrigerated cookie dough. Nestlé states that it works with NGOs, such as Nature Conservancy (TNC) in the U.S. and the Earthworm Foundation in France to identify issues across the supply chains of the wheat and cereal grains that the company uses in its products and to encourage farms to use environmentally and socially sound agricultural practices. It says that 82% of their cereals and grains were traceable back to their sources in 2020, and 59% of cereals and grains were responsibly sourced in 2020. While for a global company, being able to trace more than 75% of the wheat and cereal grains is laudable, I am wondering why 28% of the raw materials is not traceable. Likewise, Nestlé has a comprehensive report entitled, “Nestlé Responsible Sourcing Standard” where it elucidates responsible sourcing, but I am curious on why just about half of the wheat and cereal grains it sources for all of their food products were not responsibly sourced. The source of fat in this cookie dough, palm oil, often has dire environmental impacts, as it can contribute to deforestation, which decimates habitats, emits greenhouse gases, and the palm oil industry often exploits labor and employs children.

I was surprised to see that Nestlé acknowledges that the palm oil industry can be a threat to the stability of forests, communities, and the environment. It also recognizes that itself and similarly large food companies can help reduce the threat that the palm oil industry can have on humans and the environment, by claiming to take a “forest-positive approach” to sourcing their palm oil. According to recent Nestlé reports and articles, it is pushing to protect and restore the forests that it extracts palm oil from, but I could not find information on what these restorative practices might entail. The company states that its palm oil comes from “deforestation-free” sources, with 85% of it being responsibly sourced in 2020. To evaluate forests as “deforestation-free,” Nestlé mapped supply chains and used satellite monitoring services, while working with farmers and their local communities. Aiming to eradicate deforestation in the supply chains of some of its core resources by 2022, Nestlé appears on track to achieve this, and it is a good sign that the executive vice president of the Head of Operations at Nestlé, Magdi Batato, has declared that it is imperative that Nestlé and other corporations work to focus on reducing greenhouse gases in their operations and restoring the soil health and carbon-storage capabilities of land across the globe.


Despite the corporation’s extensive environmental objectives, including reaching net zero carbon emissions by 2050, Nestlé‘s pitfalls lie in its human rights violations. The chocolate in Nestlé Toll House’s Chocolate Chip Cookie Dough was 46% traceable in 2020 and 46% responsibly sourced in 2020, low numbers for a resource often built on deforestation, child labor, and unlivable wages. Perhaps a step in the right direction, Nestlé has established the Nestlé Cocoa Plan with the Rainforest Alliance to try to reform issues in the cacao industry. It has three subsets of this plan: Better Farming, Better Lives, and Better Cocoa. However, I was not able to find the farms or plantations where Nestlé sources its cacao from, and the company was recently in a lawsuit in which it was sued for its use of child labor. I was quite disappointed to see that it still largely relies on child labor for its chocolate, and this human rights abuse undermines the company’s progress toward making the company more environmentally sound. While Nestlé is making strides toward environmental sustainability and seems to be striving for changes toward stronger human rights, the company lacks benchmarks for its impact missions, and I was not able to determine how the corporation assigns percentages to figures like responsible sourcing. Overall, compared to other corporations, Nestlé’s environment and climate change initiatives are notable. These actions appear reactionary to the growing consumer demand for companies to engage in practices that will deter climate change and support social justice movements, but perhaps Nestlé would disagree with this assessment.

I could not find any information on how Nestlé prepares its Toll House Chocolate Chip Cookie Dough, how the ingredients are shipped to a factory, where in the world Nestlé sources its cookie dough ingredients from, or how it manufactures its plastic packaging. I find it difficult to assess the sustainability of the Nestlé Toll House Chocolate Chip Cookie Dough itself when little material exists on the production of this household staple and the sources of the dessert’s ingredients. While Nestlé has extensive information on the company’s environmental initiatives, how it supports small farms and producers with education and financial capital, and its goals toward just labor practices. However, the fact that I was not able to find information on products, rather than corporate values, felt contradictory to Nestlé’s mission of “Good food, Good life.” How can consumers know if they are choosing products that will support humans and the environment if the corporation is not transparent about

Nestlé is the largest food company in the world, and it employs 273,000 people globally––its size means that the corporation has the potential to have a large impact on global resources and human rights causes. I was surprised to see how transparent Nestlé is on its environmental goals and impact, its complicated use of child labor and initiatives to avert kids from cacao work and toward schooling and safety, and its number of programs to help small farmers produce goods with a lower ecological footprint. The Nestlé Cocoa Plan cannot take away from the fact that some children are involved with the production of this product. Moreover, because of the detailed reports and pages on their values and the many examples of how they implement those, Nestlé’s goal to enrich people’s and the planet’s life seems genuine. In 2019, Nestlé launched the Nestlé Gender Balance Acceleration Plan to strengthen gender equality in the company and in other large corporations. As I cannot find information on the laborers who are directly involved with producing Nestlé Toll House Chocolate Chip Cookie Dough, I am not able to assess how the corporation treats all of its employees.