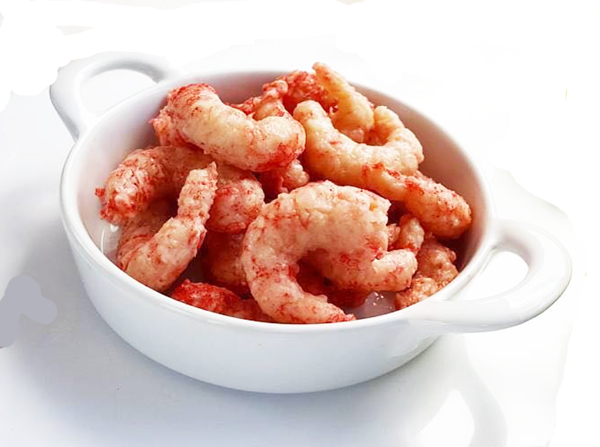 When we think about the environmental impact of the meat industry, the first things that come to our minds are probably the high greenhouses gas emission from the cow industry or the land degradation caused by animal grazing. However, the lesser-known, sometimes lesser cared for aspect, is the fishing industry’s impact on aquatic environments. New Wave Foods attempts to address sustainability issues in the fishing industry by providing plant-based fish alternatives. In this review, I will be focusing on its vegan shrimp.

New Wave Foods launched its vegan shrimps this year (2021) in restaurants throughout New York City, Connecticut, Long Island, New Jersey, and Philadelphia. It’s a shame that it only supplies to restaurants in the USA and not through retail or online sales. I understand that it’s still in the early stages of business, so I look forward to New Wave Foods expanding its supply to more sources, allowing overseas customers like me to try this gem.

On top of that, since the vegan shrimp is newly launched, a lot of information is not disclosed online. For example, the price of the shrimp is not publicised, the welfare of workers is not mentioned, and the greenhouse gas emission data is ignored. The lack of elaboration and transparency is the main reason why I cannot give New Wave Shrimp a higher score. Although I am no marketing expert, some advice I, as a sustainability-oriented consumer, would give to new startups like New Wave Food, is to improve on their transparency. After operating for another year, more data should be available for disclosure in the form of a sustainability report. New Wave Food should move on from just using empty words like “clean” and “sustainably” sourced, and provide actual figures and case studies to improve their products’ credibility and prevent potential greenwashing accusations.

The plant-based shrimp is available in raw form or crispy breaded variety. According to reviews online, the vegan shrimp cooks under heat for 3-4 minutes and performs well with a vast array of cooking methods: deep frying, simmering, grilling… you name it, the vegan shrimp can probably handle it well.

The product’s main ingredient is seaweed, which gives the vegan shrimp the texture and bite of real shrimp. Traditional shrimp is high in cholesterol (150mg/75g), which is detrimental to blood and heart health when consumed excessively. In contrast, New Wave’s shrimp is completely plant-based and contains no cholesterol. On the other hand, traditional shrimp has its edge in other areas. One serving of vegan shrimp (75g) has 1.5g of saturated fat, but real shrimp contains almost no fat. Consuming too much saturated fats can raise cholesterol levels in your blood, increasing the risk of heart disease and strokes. Traditional shrimp is also higher in protein (18g/75g), which promotes muscle strength. The vegan shrimp tries to recreate this health benefit by using mung beans as the main protein source. However, it only has 5g of protein per serving, less than one-third of what real shrimp has. Therefore, I would say both real and vegan shrimps have their own benefits and limitations in terms of nutritious content; it ultimately boils down to one’s dietary needs. Gym sharks that need protein for muscle building may prefer real shrimp, but those who are suffering from high blood pressure may benefit from consuming vegan shrimp instead.

New Wave Foods has made clear the negative environmental consequences of traditional shrimp farming. According to the U.N.’s Food and Agriculture Organization, “over 70% of the world’s fish species are either fully exploited or depleted.” This includes shrimp, which accounts for over 20% of internationally traded seafood products in market value. When one species is exceedingly removed, it upsets the delicate equilibrium in the ecosystem, harming biodiversity. New Wave Foods combats overfishing by using plants and “sustainably sourced” seaweed to create an environmentally friendly version of shrimp. It has great potential to be a sustainable alternative to the 1.4 billion pounds of shrimp that are consumed in America every year. However, there are no explanations of what counts as “sustainably sourced,” nor any mentions of the seaweeds’ and mung beans’ farming methods. Poor farming techniques, such as monoculture cropping, can also lead to soil degradation and moisture depletion, which is equally harmful to the environment. Since New Wave Foods mentioned that all ingredient sources are “traceable,” I encourage them to be more transparent and clear with their information so that consumers can make informed purchases after comparing their products with other brands.

This vegan shrimp is not organic, meaning that agrochemicals are used during raw ingredient production. This is not ideal as agrochemicals often pollute the surrounding environment and disturb the ecosystem’s balance. For example, pests often develop into superbugs and do more harm to the crops when they gain resistance to pesticides. Chemical fertilisers carried to nearby water bodies by runoff also causes eutrophication (excessive and uncontrollable algae growth), deteriorating the aquatic habitat that New Wave Foods so desperately wants to save. Although New Wave Foods said that it is implementing a “thorough vetting process when selecting ingredients and suppliers,” a strict standard should also be installed to make sure safe and environmentally-friendly steps are followed during the farming and production of the products.

The lack of transparency extends to the farmers’ and manufacturers’ labour conditions. New Wave Foods has stated multiple times in interviews that they are tired of seeing vulnerable people from less developed regions being abused and tricked into working long hours with a low pay in the shrimp industry. However, New Wave Foods never mentioned how they are planning to concretely combat the problem. The only time the issue is addressed was during an interview with online blog ‘Livekindly’; the founder of New Wave Foods said that the contracted seaweed farmers from the Netherlands are “paid fairly.” What “paid fairly” means leaves room for subjective interpretations. Since the New Wave Foods website states that the seaweed comes from “sources across the globe,” this made me further question whether the labourers’ welfare is protected in other seaweed-producing countries. What about the mung beans farmers and those manufacturers? Moreover, sourcing “across the globe” means long transportation distances and hence high transport greenhouse gas emissions. Although New Wave Foods never disclosed any transportation emission numbers, I can assume that the number would not be low. There are actually many large scale seaweed farms in offshore Alaska. As a US-based company, New Wave Foods can consider buying from local sources instead to reduce the environmental impact from transportation.

Farmed shrimp do not offer greater sustainability than wild ones. A growing number of shrimp are genetically modified and fed diets laced with high doses of antibiotics to generate a higher yield. However, the exact human health impacts and potential environmental danger of genetically modified organisms (GMOs) are entirely unknown. The vegan shrimp, on the other hand, is free from genetically modified ingredients. Although I am not too bothered by genetic innovations as I believe it brings better, stronger and more efficient food sources, I understand that some people are highly concerned about GMO’s ethical, health, and environmental impacts. Therefore, my final rating will not be influenced by the vegan shrimps’ status as a non-GMO, leaving room for personal interpretations.

New Wave Foods is a women-led corporation co-founded by Michelle Wolf, a biochemical engineer, and Dominique Barnes, a marine biologist. As a young female myself, I am excited to see females proactively actualising their dreams by inventing sustainable and healthy alternatives to remedy the environmental damages done to marine ecosystems. Particularly, I have high hopes for Michelle Wolf as a young entrepreneur with huge potentials and forefront visions. She was awarded as one of the 2021 Forbes ‘30 under 30’ list in the category of Food and Drinks. This title recognises young entrepreneurs, activists, scientists and entertainers under age 30 who have made impactful innovations. Following the rollout of vegan shrimp to restaurants and foodservice outlets, New Wave Foods has planned to produce plant-based lobster, scallops, crab, and tuna. I am confident that Michelle Wolf’s background in materials science can keep her engaged in product innovation and operations alongside an experienced team.

New Wave Foods’ leading investors include New Enterprise Associates and Evolution VC Partners. I am excited to see these investors support other culture-tech companies that promote a more sustainable way of living as well, such as shared-bicycle company ‘Lime’ and vegan meat producer ‘Beyond Meat.’ The most controversial investor of New Wave Food is ‘Tyson Food,’ the world’s second largest marketer of chicken, beef, and pork, who exports the largest percentage of beef out of the US per annum. It seems hypocritical for an alternative meat supporter to actively engage in the less ethical and less sustainable meat industry. Normally, I would criticise companies for not choosing more reputable investors, however, I empathise with New Wave Food’s state as a new and small startup. I understand it has to depend on venture capital boosts by big corporations to expand its scale large enough to make widespread changes in its early stages of development. For example, Tyson Food’s investment in late 2019 directly enabled New Wave Foods to launch its business in 2021, as well as scale up its production and achieve its aims for future products. It is tough to only get funds from sustainable sources in this profit-driven capitalist market as almost all production harms the environment in varying degrees. For the time being, as long as New Wave Food is using its fund for an environmentally and socially ethical cause, I will still consider it a sustainable company. However, when New Wave Foods continues to grow in size, I hope it can look for investors with a portfolio that better aligns with its sustainability goals.