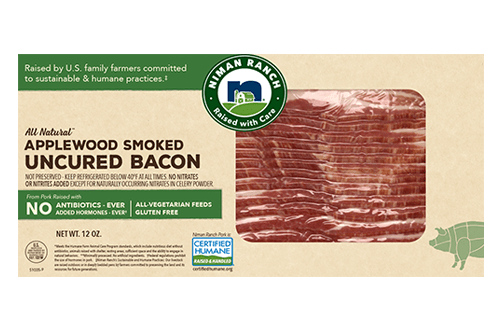 Niman Ranch is a collection of 750 farms around the U.S. that are small, family-owned, and subject to strict guidelines for raising animals. Most of the farms have belonged to the families for generations and all together produce a collection of beef, pork, sausage, and other meats that are sold in local grocery stores and served at restaurants. Bacon is Niman Ranch’s most popular item and is known for being more fatty than other brands because of the way the hogs are raised outside as explained in this review’s “How It’s Made?” section.

As far as meat production goes, Niman Ranch is top notch because of their local small-scale production, antibiotic free practices, and short ingredient lists. To some extent, raising animals is inherently harmful to the environment because it takes up land that may have once been a forest and animals emit greenhouse gases, but Niman Ranch has a clear dedication to sustainability and sticking to tried and true practices to produce their meat.

The bacon has a short ingredients list of pork, water, salt, turbinado sugar, and celery powder free of additives like nitrates or nitrites (hence the “uncured”) that are sometimes used to preserve processed meats. The hogs are fed 100% vegetarian diets which is healthy for both the hogs and humans because it helps prevent the spread of viruses. The hogs are also raised without hormones or antibiotics, which allows for more natural production and helps prevent the rise of antibiotic resistance caused by an overuse of antibiotics in the meat industry. Additionally, turbinado sugar is a raw sugar that requires much less processing than the melting, crystallizing, and drying required to produce regular cane sugar, so using turbinado instead of cane sugar saves energy in the manufacturing stage.

Every ingredient in this bacon serves a purpose and Niman Ranch clearly strives to make the least impact on the environment with each ingredient. However, raising hogs is inherently harmful to the environment because it takes up large areas of land that were often deforested to become farmland. This change in land use increases greenhouse gas emissions because there are fewer trees to take in carbon dioxide. Despite this inherent property, Niman Ranch is still dedicated to using ingredients that have a minimal environmental impact.

The life cycle of Niman Ranch’s bacon starts out at hog farms around the country where farmers are subject to a long document of comprehensive regulations for raising hogs. Some of the requirements relate to the physical environment where the hogs are raised; for example, they must have sufficient dry space (free from manure) where they can lie down without touching other hogs. Many Niman Ranch hog farmers, like Ron Mardesen, also try to keep their hogs outside as much as possible which sets them apart from standard hog farmers. Mardensen discusses his method of making sure his hogs spend time outside everyday, especially in the winter, because it allows the hogs to naturally gain fat to protect them from the cold. In this way, the hogs become more fatty on their own without overfeeding which makes for a juicier slice of bacon. After slaughtering, the pork is then cut and smoked over a real applewood fire for 6 hours rather than using liquid smoke which contains a chemical that poses a risk for cancer.

Even though Niman Ranch publishes their outdoor raising method on their website, a Niman Ranch spokesperson claimed that 75% of hogs under their label are raised inside factory farms. Further evidence for this is that Perdue (a factory farm corporation) purchased Niman Ranch in 2015. Perdue has had multiple lawsuits in the past for lying about raising animals humanely, so it is possible that Niman Ranch is not telling the truth on their website.

Lastly, it is important to address the ethical issues with slaughtering hogs. There is no sustainable or humane way to kill animals because it involves taking a life of a living being. Whether or not Niman Ranch raises their hogs ethically, producing meat still requires slaughtering which is a significant deduction to their score.

At Niman Ranch, families rely on their farms as their primary source of income and many of the farmers have been farming since they were children and have grown up to raise their children on their farms. Niman Ranch's website includes short biographies, interviews, and videos about several of the family farmers. Because the meat industry is notorious for worker exploitation, it is important that Niman Ranch humanizes the farmers because it allows consumers to put a face to the people who produced their meat. They also bring up some gender equity issues in the farming industry, like what it is like to be a female farmer when the industry is primarily male. One farmer, Penny Janousek, discusses what it was like to grow up as a female farmer and shared that while she used to not be respected by agricultural industries, she is now an official partner with her husband. Overall, Niman Ranch is extremely transparent about their farmers and takes pride that their meat comes from small, family-owned farms.