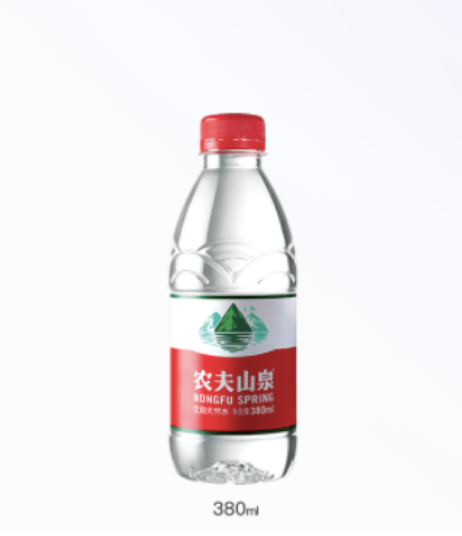 The product is consisted of pure mineral water which the brand Nongfu has been really proud of. As a matter of fact, Nongfu had its entire production and filtering process listed out on their website—I assume that was a result of the 2013 quality scandal . Since then, Nongfu had been following a campaign to the consumers through water source transparency which results in them had all their sources of water listed out with specific locations. With this transparency, we could easily look into their factory for slightly more detailed information than the industry average transparency. However, even with such transparency, little solid information was revealed on energy use, which is a significant part considering the company being the biggest bottled water producers. I would conclude the company had the suspicion of shifting focus from the consumers by their amazing water source campaign.

If we zoom in to the packaging part, we would also find the product to be troublesome. The product is made from Polypropylene, or PP, a form of polymer that could only be partially recycled. This material would degrade itself in about 20-30 years, yet would release toxins and is not considered any environmental friendly material. Considering the majority sales of the product is happening in China, most part of the remains of the package would end up in landfills, or even worse in the oceans. Facing this situation, the brand is, sadly, still not putting any emphasis on recycling issues. Efforts was made by the company to shift the packaging materials of their barrels to more recyclable ones—yet the connotation behind this action is still more formalistic than anything environmental friendly. I believe Nongfu could not be anywhere near an eco-friendly initiative if they don’t realize what actually matters—where the majority of their sales happens.

The water in the product was taken from the water source, which is scattered across China, to factories and get bottled. As discussed above in the “What is it made of” section, the product is looking transparent yet is covert in all the crucial parts when it comes to sustainability and carbon footprints. In fact, critics who had investigated bottled water industry in China claimed that companies including Nongfu is wasting water in the very process to produce bottled mineral water—"three liters of original water from the source would result in only one liter of bottled water". Looking from the good side, the company did release a few promotion videos on animal protection in the area where they get their water source, however, I do not think by just adding a subtitle saying the video was shot directly near the water source would make the brand free from greenwashing.

Nongfu is one of the brands that really corporates the culture in their marketing strategies, which is also one of the reasons that I chose to review this product. They had a series of videos zooming in to their employees in all the crucial points in their production line—from finding the sources to delivery. This allows us to look into what is going on in the employees’ perspective, and adds more credibility in how the company treats their employees. Nongfu is also involved in a series of social welfare projects starting from the early 2000s—as their own website had listed. These programs usually focuses on balancing poverty and providing resources for kids in poverty-stricken families. Although the company performs poorly in contributing to the environment, we can’t deny their effort in fighting poverty.  Yet this could be another example of focus shifting because, as aforesaid, they are the biggest bottled water company in China that takes up nearly 1/5 of the worlds population, they should be aware of the huge consequence of their slightest actions towards the environment.