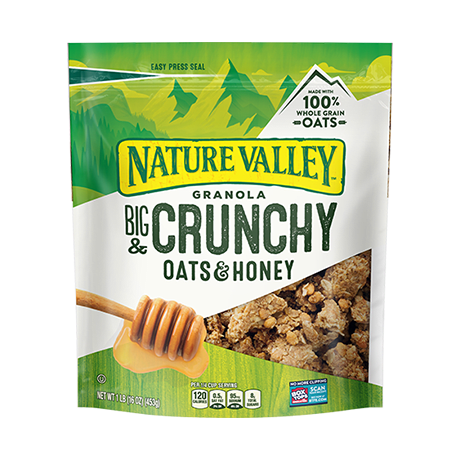 If any of you have seen my other reviews (which I do recommend!), you’ll know I love granola. Yogurt and granola is my all time favorite post-workout snack. Hence, I decided it was important to find out who and what was behind what I was eating on almost a daily basis. Overall, I would give the company 1.8 Planets and in general I always stress the importance of buying locally because I know a lot of local farmers or stores sell granola.

Ok, it is fairly simple to know what is in this granola: Whole grain oats, sugar, canola oil, rice flour, honey, brown sugar syrup, salt, baking soda, soy lecithin, and natural flavor. Their food philosophy is simple: simple ingredients. They indicate the purpose for every ingredient with words like “energy-booster” or “touch of sweetness”. In all honesty, these are fairly sustainable ingredients. Oats are typically grown in crop rotation because it delivers nutrients to the soil, which provides the next season’s crops with naturally fertilized soil. However, I wish the company would replace the majority of sugar with honey. Sugarcane is extremely demanding of water, causing major loss to biodiversity and causing people to deem it one of the least sustainable agriculture products. Honey, on the other hand, typically is maintained by bee keepers, which is sustainable as long as they practices sustainable habits. It doesn’t take up a lot of space and usually helps the surrounding environment by providing it with the bees to increase pollination. However, if I were the one running the company, I would use maple syrup over honey and sugar. Maple syrup is naturally grown and planting more trees in order to extract more maple syrup seems to be a win-win overall. Some people go so far as to say maple syrup should replace all other sugar and sugar substitutes. Another issue arises with the fact that the company doesn’t dictate that they are using organic canola oil. Hence, if it isn’t organic it means there is possibility that the workers creating the granola can be exposed to hexane to extract the oil from the seed. This raises concerns but, given the lack of information, is something we must demand the company tells us. Finally, it is most likely that the soy lecithin is a GMO, given the fact that the company doesn’t say otherwise. Moreover, the company indicates that they started a program in which people can drop off their wrappers to their granola bars to a Nature Valley store near them and they will recycle them. This provides no indication that this packaging is meant to be recycled, and even if so, making people travel to a store to recycle something feels very dis-incentivizing.

Unfortunately, the company does not address its suppliers nor the process by which they create the granola. They insure the importance of creating a safe working environment, however, doesn’t address the manufacturing process. Granola is fairly simple to create once obtaining the products. The company does not address how it obtains the energy nor if it is working towards using renewable energy. Energy consumption is such a major part of the manufacturing process that I am disappointed in Nature Valley for not being transparent about it. General Mills, which owns Nature Valley, does not address the process in which they actually manufacture the granola, however, they do a good job of indicating that their agriculture products are regenerative and that they are committed by 2025 to creating the least water demanding process for production. Moreover, the company doesn’t address the fact that the workers at the bottom levels, such as those obtaining the seeds and extracting the oil, are treated with labor sustainability. I need much more information before they can be given 2 Planets.

Nature Valley, as a company, is earthy-crunchy. Eating the granola and looking at the packaging makes me want to turn off my phone and hike in the woods for a couple weeks. However, similar to the O Organics review, I expected more. The company has begun programs such as the recyclable wrappers and partnering with The Recycling Partnership. Moreover, they have restored 10,000 miles of national park trails, donating $3 million to the process, in places such as Yosemite, Glacier National Park, the Grand Canyon, Shenandoah, and more. They make statements, such as committing, to fully recyclable packaging by 2025, however, I believe for a company that prioritizing the importance of having earthy ingredients, that they should have prioritized sustainability from the beginning. Even General Mills, which owns Nature Valley, gives an extensive report about sustainability, however, I have found limited real information about how they are improving their sustainability.