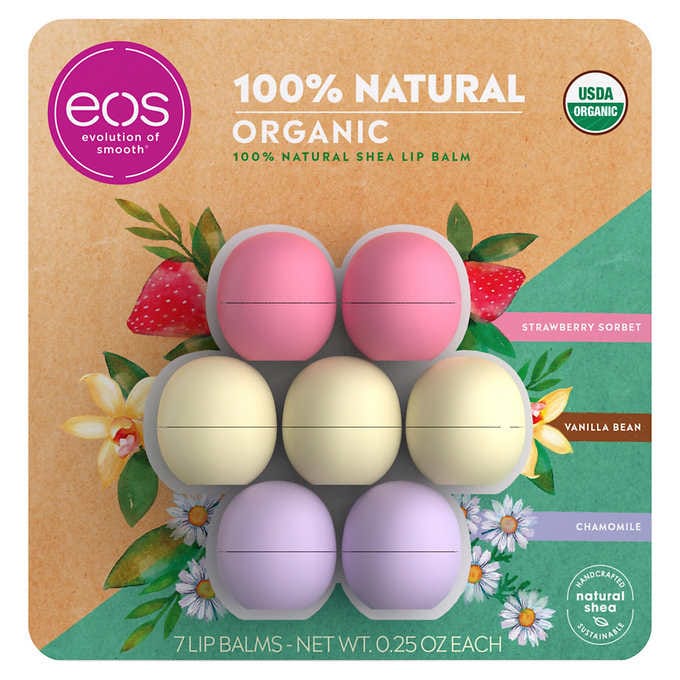 My impression of the eos team is that they genuinely care about making sure their products are environmentally, socially and economically sustainable. It seems to me that eos is doing a lot of good work when it comes to sourcing their shea butter, but they don’t share much information on any of their other ingredients and that makes me wonder why. In the end I had to give them a lower score than I would have liked because of that lack of information surrounding their other ingredients. Another reason for their low score was due to the actions of one of their co-founders. One of the things that I like about eos is that they have partnered with TerraCycle so that you can recycle your empty packaging for free. What’s more, is that when you recycle, you will earn points that can be redeemed for gifts or cash to give to your favorite school or nonprofit.

At eos, many of their products contain sustainably sourced ingredients that are tested under the supervision of dermatologists and never on animals. I wish eos would elaborate more on how their ingredients are being sustainably sourced, especially their beeswax and cocoa butter. Climate change has put many bee species at risk of extinction and out of all of eos’ ingredients I think this one is one of the more important ones to address. Although eos doesn’t seem to have a bunch of certifications, they're proud to stand by their product and provide transparency that you can trust.

The ingredient that all of eos’ products have in common is shea butter. I think shea butter is one of the world’s more sustainable natural resources. It is grown wild in West Africa and the trees can live up to 300 years without irrigation, fertilizers or pesticides In order for shea to be utilized as an ingredient the kernels are first harvested and prepared by hand. It's worth mentioning that they don't over harvest them because they only collect the ones that have fallen off the tree. Once prepared, the kernels are boiled in giant pots to make the shells (that become used as fuel) easier to break. The seeds are gathered, roasted and then beaten with water to release the rich fats. The fat extracts are then boiled, skinned and cooled which becomes the end product, shea butter.

A cool thing about shea is that it is an industry driven by and dominated by women, allowing them to earn an independent income. Eos puts a lot of care and attention into who is making their shea butter. In 2019 they debuted their SHEA BETTER Sustainability Program that focuses on improving the lives of women by providing fuel efficient stoves to improve the air quality and health of the women producing the shea butter while also consuming less wood and water. Then in 2020, eos decided to extend their impact by reaching out to more villages and providing more support. Eos built micro-warehouses for the women so they could store more kernels during harvest, and if they choose to, the women can rent out their micro-warehouse during the off-season to gain additional income. Eos also provided communities with motor bikes to make harvesting easier and more efficient. Lastly, eos is co-financing and constructing a modern organic shea processing center to improve productivity and working conditions while reducing water and fuel consumption.
More on the administrative side, it seems that in 2019 a co-founder, Jonathan Teller, was using company funds to support his lavish lifestyle and later tried to kick out another founding member, Sanjiv Mehra, from the company when Mehra tried to address this issue. It’s said that Teller withdrew 100 million dollars for personal interests. This is very sad to hear because this money could have been better spent by giving their employees better wages or improving the conditions of those who work in their supply chain. Another co-founder, Bion Bartning, who was booted from the company by Teller in 2008, recently found out that he was cheated out of his 20% stake in the company. According to the complaint, Teller’s animus towards Bartning, which included offensive comments regarding his Mexican heritage, was so great that a “healer” was brought into the company’s Manhattan offices after he was fired to “cleanse” it of Bartnong’s spirit. Needless to say, I don’t think we should be supporting a company whose CEO demonstrates such poor character.