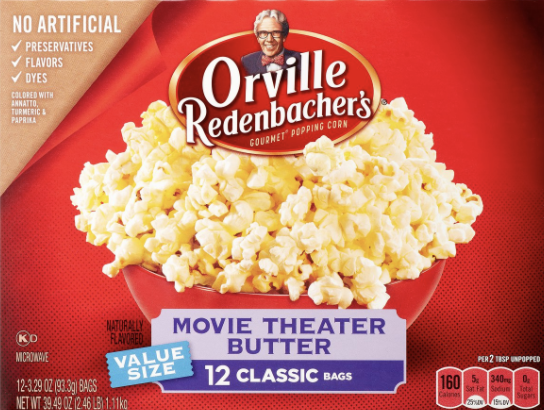 If baseball is America’s pastime, then popcorn would be their snack-time. Having worked at a movie theater myself, I know for a fact how crazy people get over their popcorn. I found it interesting, however, when my theater started advertising that their popcorn was sustainably popped. Given the company’s new marketing ploy, I decided to write this review to see if this was just another case of greenwashing, or if they actually meant what they said. After unloading bags upon bags of popcorn from the freight, the name Orville Redenbacher became engraved in my brain. But since a 20 pound bag of popcorn kernels seems like overkill for the everyday consumer, I decided to choose the next best option which is their 12 individually sized bags of movie theater popcorn. Digging deep into the production of their famous popcorn, it turns out that things aren’t as great as they seem. The ingredients they use require a lot of energy and natural resources, which are contributing to things such as biodiversity loss and climate change. While the company is trying to progress towards a sustainable future, their net benefits on the environment are still less than that of its impacts. For these reasons alone, I believe Orville Redenbacher’s movie theater butter deserves a sustainability rating of 0.5 planets.

Orville Redenbacher’s perfectly popped popcorn is made of whole grain yellow popping corn, palm oil, salt, natural flavoring, annatto, and mixed tocopherols. The majority of their popcorn is grown in Indiana, where it takes approximately 20,000 acres of fertile soil to grow. It’s also a very thirsty crop, requiring 22-30 inches of water per year. The next ingredient worth mentioning is palm oil, which is notoriously known for its destruction of tropical forests and biodiversity loss. Palm oil is an essential component for popcorn, because of its ability to withstand high heat and prevent the kernels from burning. According to the company, 100% of their palm oil is sourced responsibly and sustainability under guidelines from Roundtable on Sustainable Palm Oil (RSPO), which is a third-party organization that focuses on promoting the growth and use of palm oil through global standards and the opinion of all stakeholders involved.

Skipping over the salt, the company’s smart label also says it contains natural flavoring derived from milk. This puts added pressure on the dairy industry, which is already a key contributor to greenhouse gas emissions and climate change. The company also uses annatto in their recipe, because of its ability to add a tasty yellow-orange hue to the popped kernels. Annatto comes from the seeds of an achiote tree, which is usually grown in tropical regions around Mexico. From an environmental standpoint, the achiote tree demands very little water, space, and soil to grow. However, the impact it has on laborers is a little more worrisome, which is something we’ll get too in the next section. The final ingredient in their delicious snack is tocopherols. Tocopherols are a fat-soluble form of vitamin E that comes from vegetable oil. Its main job is to help extend the shelf life of the popcorn and preserve it from going bad. Unfortunately, 85% of vegetable oil comes from soybeans, which destroys natural habitats and increases greenhouse gas emissions due to deforestation. All in all, Orville’s popcorn consists of some heavy hitter ingredients that are not only bad for the environment, but for people as well.

After the corn is grown and harvested, it’s sent to a processing facility where it gets packaged and prepared for consumption. The first step in the process is to condition the kernels into giant silos, where it gets blasted with warm air to help reduce its moisture content. Once it reaches the appropriate moisture level, the kernels go through an oscillating sifter that separates the chunks of cob and broken kernels from the useful batch. At this point, the hopeful kernels undergo a purification process at the gravity table, which uses fans and a vibrating motion to lift them into the air and separate them based on size. Surprisingly enough, it doesn’t stop there, as the kernels are once more sifted and inspected with an electronic eye that detects impurities and shoots a stream of air to eliminate them from reaching the final product. From there, the kernels are packaged in a paper bag that contains a vapor barrier to prevent moisture loss, where it is finally sealed in plastic and ready to be shipped. While this may seem like a lot of unnecessary information, I wanted to include it in my review to show the amount of machines and energy required to make the popcorn. According to Orville’s parent company, which uses 10,406,165 GJ of energy for all of its products, only 4% comes from renewable energy. Therefore, it’s safe to assume that the majority of the machines used to process the popcorn are responsible for releasing large amounts of greenhouse gases into the atmosphere, ultimately contributing to climate change.

In order to obtain palm oil, one must first plant the seeds in a nursery for about a year. Once they reach a good enough size, they are transferred to the plantations, where they are grown into adulthood. The trees are ready for their first harvest after about 30 months. During this stretch of time, the palm requires 120-150 mm of water per month. That means at least 3600 mm of water is needed per tree every year, which is a lot when you consider how many trees there are per acre. The fruit is then harvested using various machines and equipment that run on fossil fuels, and transported to the factory to begin processing. At the factory, the fruit is steamed, sterilized, and pressed to produce Palm Kernel Oil (PKO). Finally, it goes through the a refinery before ending up in products such as Orville Redenbacher’s movie theater popcorn. The production of palm oil is similar to that of whole grain corn in that it requires a lot of energy, but it separates itself with the destruction of wildlife habitats along the way. To avoid writing a repetitive paragraph, other types of vegetable oil’s (soybean) run into the same problem and are actually considered to be worse for the environment due to their lack of efficiency.

Annatto on the other hand, is actually good for human health and the environment. It is great at preventing illnesses caused by cancer and has a low carbon/water footprint. But even though it excels in these aspects, it does lag behind on the social front. According to Healable, a company that specializes in making ethical labels to influence consumers, the labor needed to grow the achiote tree is considered one of the most dangerous agricultural practices around. Farmworkers are often subjected to dehydration, heat stroke, toxic chemicals and pesticides, machinery, and contaminated drinking water. They work long hours in the sun, performing strenuous tasks of which they are greatly underpaid. Also, even though labor laws may exist, the workers are often too afraid to speak out in fear of losing their job or getting deported.

To overcome all of these barriers, I suggest Orville Redenbacher increases its supply of renewable energy. They can do this by adding an off-grid solar system to supply the majority of their energy needs. I also think they can do without the extra plastic wrap on every single individual bag of popcorn. The plastic isn’t recyclable and I believe a sealed cardboard box is good enough to ensure it hasn’t been tampered with. While palm oil isn’t very sustainable, Orville is doing everything it can to ensure its ethical consumption by purchasing from farms that follow RSPO’s guidelines. Some of those rules and regulations include not developing on high carbon stock land, respecting local indigenous tribes and communities, and increasing the traceability of their produce from the supply chain. Finally, Orville should completely eliminate the use of annatto into their popcorn, since it is only there for its looks and not taste.

Orville Redenbacher is owned by the parent company Conagra Brands. Every year, Conagra releases a citizenship report that addresses key aspects of sustainability such as making for a better planet, good food, stronger communities, and responsible sourcing. They not only explain what they are doing to make a difference, but they provide actual data to help tell their story. For example, since 2009, they have conserved 3.6 billion gallons of water, decreased their carbon footprint by 204,980 metric tons, reduced more than 99,000 tons of waste, and decreased packaging materials by more than 32,000 tons. Now I understand these numbers mean nothing without the total amount consumed so to give you an idea of the progress they’ve made so far, in 2020 they used 18.2 thousand cubic meters of water, which equates to roughly 4 billion gallons. That means they’ve nearly cut their water usage in half. Conagra also does an exceptional job at providing product transparency through their smart label, which allows consumers to see every ingredient in the food that they buy. However, the one thing that I would like to see added to their smart label is where they obtained their ingredients from just to ensure it follows Conagra’s Supplier Excellence Program on ESG related practices. Lastly, for six years in a row and counting, Conagra was awarded one of the best places to work by the human rights campaign foundation for their perfect score on corporate equality. They’ve also been named as an honoree of The Civic 50, donating 25 million meals to people in need through their long-standing partnership with Feeding America. In the end, I believe Conagra is heading in the right direction by focusing their business plan on the United Nation’s Sustainable Development goals, but they still have a long ways to go in their journey to become a sustainable company.