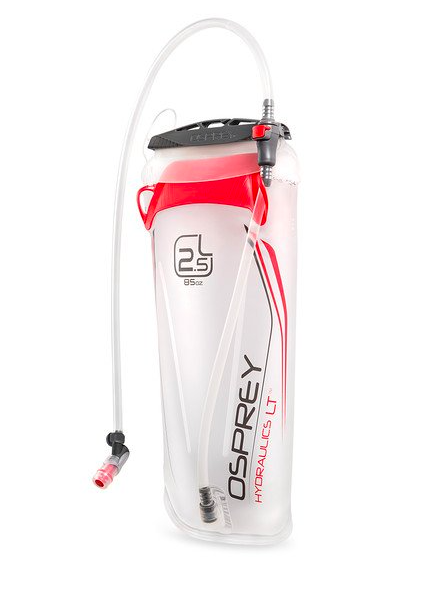 Osprey’s hydro pack, also known as the “water bladder” to anyone who owns one, is made for light and fast activities where weight plays a crucial role in your outdoors experience.

I personally own Osprey outdoor gear and absolutely love it. From their water bladders to their backpacking packs, their products are durable, comfortable, and as light as a feather. In June of 2019, Osprey announced that they would plan to become the most, “progressive, transparent, and sustainable hardgoods brand in the world.” They are in the process of adopting more and adapting to a more sustainable production cycle, which gives me hope about a company I have supported for so long in my outdoor adventures. I am really glad to see sustainability at the core of their mission and admire the very clear efforts they are taking to minimize their impact on people and the planet. I would like to see more transparency from the company in how they make their products and more initiatives from them to encourage consumers to reuse their products and create initiatives for people to recycle Osprey gear, to reduce the impact even more. I believe in the power and the path that Osprey is on and promotes, and will be following up with their initiatives going forward as the conscious consumer that I am. I am giving Osprey an overall score of 1.7 out of 3 worlds, because of the sustainable practices they already have in place and I know that they can and must do better for people and the environment.

According to the description found below this product on Osprey’s product page, this hydro pack is, “BPA-free, phthalate-free, lead-free, guaranteed,” and is certified as “food safe” as it follows all FDA and EU regulations. While there is not much information on how this specific product is made, Osprey has been dedicated to sustainability efforts since “day one,” and it is one of their core values as a company, according to their page on sustainability. They acknowledge the responsibility they have as a company to make products that last a long time with as little trace as possible in the process of making and creating them. Under the “chemistry” and “materials” sections of their sustainability page, Osprey features the following quote, “Chemicals are necessary to create our high-quality products—but they don’t need to be harmful.” I personally appreciate how they included this into their product design page on sustainability, because it’s the truth. Every product we have used, we use, and we will use, requires elements of some sort to make it and a process of expending energy to create the “final” product we use in our daily lives. When companies recognize how their impacts on people and the planet don't have to be harmful, a lot of good comes of that. While I think Osprey should be more transparent about how their products are made, I do believe they are off to a good start with the initiatives and practices already set in place of the company.

Again, Osprey does not mention how exactly this product was and is made. But, I did read an “Osprey Story” from 2011 written by a mountain biker “Osprey Athlete” who was interested in the potential plastics in plastic products that mimic estrogen and can cause increased breast cancer or decrease sperm counts to name a few health issues. Products even labeled “BPA- free” can still have harmful chemicals that mimic estrogen and contribute to cancer development and progression. According to this “eco-alarmist” individual, he had an endocrine disruptor chemist look at the Osprey BPA-free plastic water bladder, and she claimed that Osprey was really trying to do better at removing BPA chemicals. According to the individual whose Osprey Story I read, he did his own research into plastics in his water bladder and found that part of Osprey’s testing and re-testing process of their hydraulic reservoir includes having them checked out by the Breast Cancer Fund to test for estrogenic activity. After conducting my own research into the matter, I personally did not find any information on whether this is in fact true or not. Osprey might have sustainability as one of their core principles and maybe making efforts to reduce BPA, PVC/phthalates, or triclosan in their plastic production of products, but the lack of information speaks louder to the fact that they are not being fully transparent about their plastic products, which is included in just about the typical gear you need on an outdoors adventure. It’s also important to note that any product of plastic is made from natural gas materials such as coal, natural gas, and crude oil through a polymerization or polycondensation process, which results in some ecological footprint one way or another.

Osprey is one of the best known and best-selling outdoor brands founded in 1974 in Santa Cruz, California by Mike Pfotenhauer. The company founds itself relocating to its current home in Southwest, Colorado when demand for great-fitting backpacks increased. Osprey started picking up and adopting more sustainable practices in the making of all their products. The outdoors brand has placed sustainability at the core of its mission and is committed to building high-performing products through a holistic approach to ensure leaving as little trace as possible. As part of their social responsibility, which they have included a whole entire page on their website, Osprey is committed to supporting progressive social and environmental policies and programs via direct contributions, and will, always conduct business with, “integrity and respect to human rights". Osprey has implemented a world-class factory code of conduct based on the Ethical Trade Initiative that guarantees, “appropriate wage, working hours, and the safety and right for workers to unionize.” Their factory is based in Ho Chi Minh City, Vietnam, and follows these strict regulations and promises.