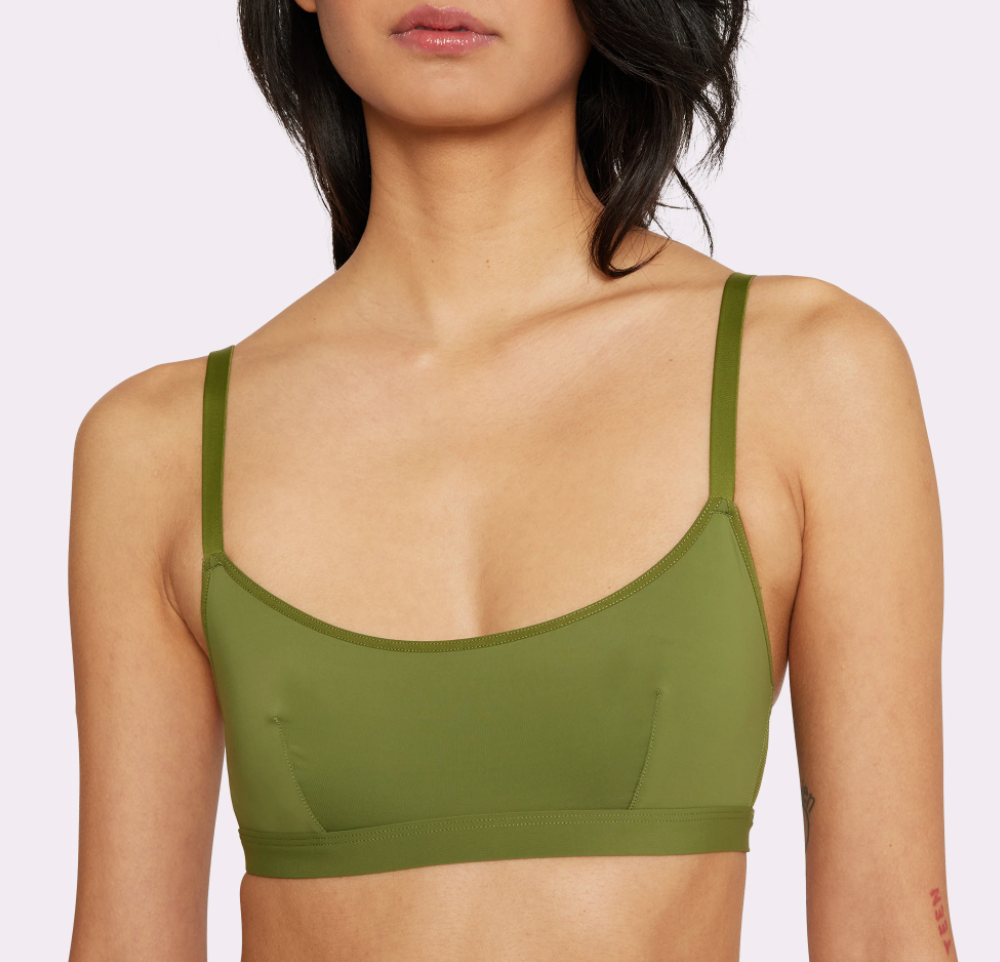 It is true that Parade is spearheading sustainable practices in the underwear industry that are not otherwise utilized. They also aim to provide underwear at an affordable price point, a factor that allows for accessibility, but that also encourages higher-volume purchases. Parade promotes the display of “real” bodies, meaning they feature women who are not edited, underweight, or of the traditional Eurocentric beauty standard, inspiring their consumers to love their bodies. All of these factors are important, as it is clear that Parade dares to go against the grain of the fashion industry. That said, their sustainable practices fall short in terms of their involvement in production, and in their lack of a verbal commitment to sustainable growth. And because they are producing at such a high volume, they are contributing to a culture of fast-fashion. I would be wary of this brand, as they have much to improve upon before they can truly consider themselves “sustainable.'”

This bra is a new addition to Parade’s products. The style is made from recycled yarns that were “developed by a team of ex-Lululemon product experts.” It is composed of 85% Recycled nylon, 15% spandex, and a 100% cotton lining. The makeup of the material is mostly positive, especially in considering that comfort is of utmost importance in the underwear industry. Additionally, stretch is required to ensure maximum support for bra-wearers. The materials are certified by Oeko-Tex, an independent company used by likes of Stella McCartney and Reformation. The certification means that the material is “free of chemicals that can be harmful to the planet,” but such chemicals are not listed. The company also uses NSF, another independent certifier, for other materials used in their products. Companies like Parade are able to pay NSF to visit their factories and assess whether or not a textile meets a variety of standards. Parade’s underwear meets the “Global Recycled Standard,” but like with Oeko-Tex, this is one of five standards listed on their website. That means that there are other components to the production, like their “traceability” standard measuring the impact of a textile through the entire supply chain. Lastly, Parade uses compostable packaging, made from cornstarch, for mailers. This is important because it is a step in the right direction towards zero-waste. That said, compostable packages require that the individuals have access to a compost bin, and if not, the packages end up in landfill. This means that Parade does not entirely guarantee “no-waste” in their packaging, and thus cannot make such claims. Because Parade does not present the whole picture of their product’s alleged sustainability, there is room to improve in this category. Thus, I would give them 2.5 planets.

Parade produces their underwear in a factory in China that is both Oeko-Tex and Sedex certified. Parade uses another independent organization, Amfori, to certify that their factories are up to the Sedex standards. In using third parties to verify the conditions of their factories they offer up neutrality in their claims, but at the same time, distance themselves from the ethicality of their working conditions. In my opinion, their use of third-party standards is not entirely ethical because the brand is not engaging at an interpersonal level with the people who are responsible for producing their products.

Parade donates 1% of their revenue to Planned Parenthood, a cause that is important to support, but because such a small percentage is donated, the gesture feels performative. If Parade was truly an advocate for women’s reproductive health, they would invest in educating their consumer base on PP beliefs and practices, and would donate a higher portion of their revenue. Instead, their donation to Planned Parenthood can act as a tax write-off, benefitting their company more so than the cause Planned Parenthood stands for.
Under the “commitment to sustainability” both on their website’s homepage and on Instagram, Parade very simply states their use of recycled nylon, and biodegradable packaging. What this does is it indicates a virtue, but does not educate their consumer on just why that virtue matters, or how the company is able to accomplish it. It also only covers one facet of what it means to truly be “sustainable.” They do not mention the fact that because they are an online shop, they are contributing to high emissions via their distribution of goods. They also fail to acknowledge who makes their products in a way that is easy for the consumer to access, suggesting that ethical production on the labor side is not one of their primary values. And most importantly, the company encourages constant consumption through frequent style drops, which they advertise heavily on all platforms. Personally, I see Parade on my Instagram at least once a day be it from a micro-influencer or as a paid ad, proving that much of their funding is spent on increasing their consumer base. If Parade were truly committed to a sustainable future for underwear, I would argue that they should be limiting the scope of their consumer base, so as to discourage rapid consumption that is not mindful.
Parade claims to offset the carbon produced in their “Universal” underwear style with the company NativeEnergy. This is a problematic factor because the company has come under fire for their validity in carbon offset production, and for their disruption of native lands. The company even claims to be run by native peoples, when in fact, two white, non-native men are owners of the company. The fact that Parade has chosen this company to work with in order to alleviate their carbon conscience shows a lack of care toward their massive footprint.