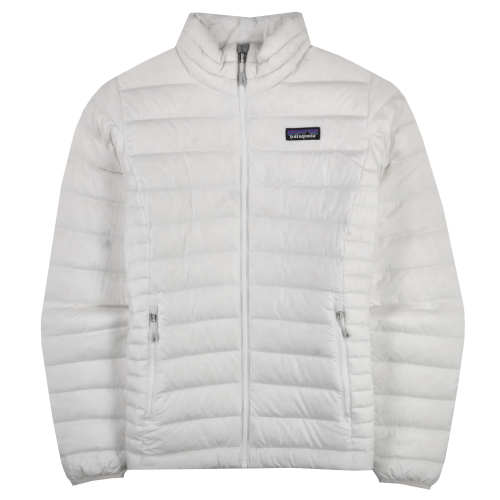 When looking into sustainable clothing brands, Patagonia is widely lauded as a company taking great strides for the environment. Their website is full of information regarding sustainability and ethical manufacturing. In addition to providing important information to the consumer, the website also acknowledges the areas that the brand aims to improve in regards to sustainability. I found their ability to reflect on their own shortcomings refreshing in a world where brands love to praise their initiatives rather than understand that there is always room for improvement. In particular, the Worn Wear line from Patagonia creates a system where consumers are paid to turn in their used Patagonia items, and the company cleans and resells them. This extends the life of the garment in addition to giving consumers the ability to buy quality outerwear in a sustainable manner. This system has many exclusions in terms of items it accepts. This could be improved. The specific item I looked at is the Women’s Down Sweater which is for sale for $109, compared to its initial price of $229. This is great way to get a quality product at a reduced price while extending the life of the jacket.

This jacket is part of Patagonia’s “Worn Wear” line which takes trade-ins of used Patagonia items and cleans and resells them. In this respect, this item is an entirely reused product, making it highly sustainable. By keeping the garment alive for even only 9 extra months, the carbon footprint of that garment is reduced by 20-30%. Additionally, in terms of transparency, Patagonia offers helpful information on how the product was initially made. The shell and lining of this jacket are constructed from 100% recycled polyester. This means that material was constructed from existing plastic rather than petroleum, which polyester is generally made from. While recycled polyester makes use of existing plastic, it can still release dangerous fibers through washing machines. That being said, winter jackets tend not to be washed nearly as frequently as other clothing items, suggesting that this is likely a less prevalent issue than in other garments. The insulation of the jacket is made of Advanced Global Traceable Down, which is certified as treating the birds in a humane way by NSF international. NSF is an independent, third party organization that evaluates if companies meet sustainability, quality, safety, and performance standards. The jacket is also treated with durable water repellent. Patagonia acknowledges that this has hazardous byproducts. This is quite harmful to the environment, and the company is searching for effective substitutes. Thus far, they have been unable to find comparably effective, environmentally friendly solutions. Overall, the fact that this is a previously owned jacket, combined with the fact that the initial components of the jacket were largely sustainable makes this an excellent choice.

As part of the Worn Wear line, the jacket was turned in by a previous owner. Patagonia utilizes Tersus Solutions to clean used items. Tersus Solutions uses 98% liquified CO2 rather than water and energy. This conserves natural resources while simultaneously not releasing microfibers into the water since the Tersus Solutions captures the fibers. Additionally, items in the Worn Wear collection only ship within the United States, in effect somewhat localizing the production and distribution. However, this also means the Patagonia shoppers in other regions of the world must buy new products, incurring both environmental impacts of production as well as transportation. In January 2020, reports indicated that the Worn Wear line grew by 40% since the previous year, and the line attracted customers that were on average 10 years younger than the typical Patagonia buyer. Therefore, it seems that Patagonia has a great opportunity to attract a wider clientele as well as generate revenue if they expanded Worn Wear to other areas of the world. Nonetheless, since this item was cleaned and refurbished in the United States and is entirely reused, it is very sustainable in terms of manufacturing process.

Due to being a traded in item, this listing does not have details about the factory where it was produced. However, Patagonia does offer information on their factories on their website. Patagonia does not own their own factories and instead partner with facilities in 16 countries. Their website offers a map where the mills, factories, and farms they work with can be found. They have reduced the number of factories they use by 58% in order to better understand and oversee the conditions. Unfortunately, they state that only 35% of these facilities pay their workers a living wage. Patagonia explains that the prices of factories overseas are cheaper than the United States and there are fewer factories in the United States due to a decline in the U.S. textile industry. This tradeoff of people for price must be improved. That being said, the brand does not shy away from exposing its own shortcomings. For example, when some of its suppliers were outed for human trafficking in 2015, the brand acknowledged the issue and explained the steps it was taking in order to prevent this in the future and attempt to ease the harm already executed. Furthermore, the Patagonia website explains which of their materials are sustainable and which are not. The Worn Wear page in particular emphasizes this importance of not over consuming. That being said, as they acknowledge, they still have many areas that require improvement. The website states that the brand prioritizes quality over environmental sustainability. While they say they aim for both, this concept must be reevaluated to prioritize the health and well-being of our planet over their bottom line. It seems that they understand this as well, and they affirm that by 2025, Patagonia will be 100% carbon neutral, clothing will be made from 100% recycled materials, and their packaging will be 100% sustainable. Overall, although there is still a lot of work yet to be done, I feel confident that Patagonia will continue to improve their practices and substantiate change. Their willingness to evolve and self critique leads me to believe they will continue to pioneer positive improvements and industry standards.