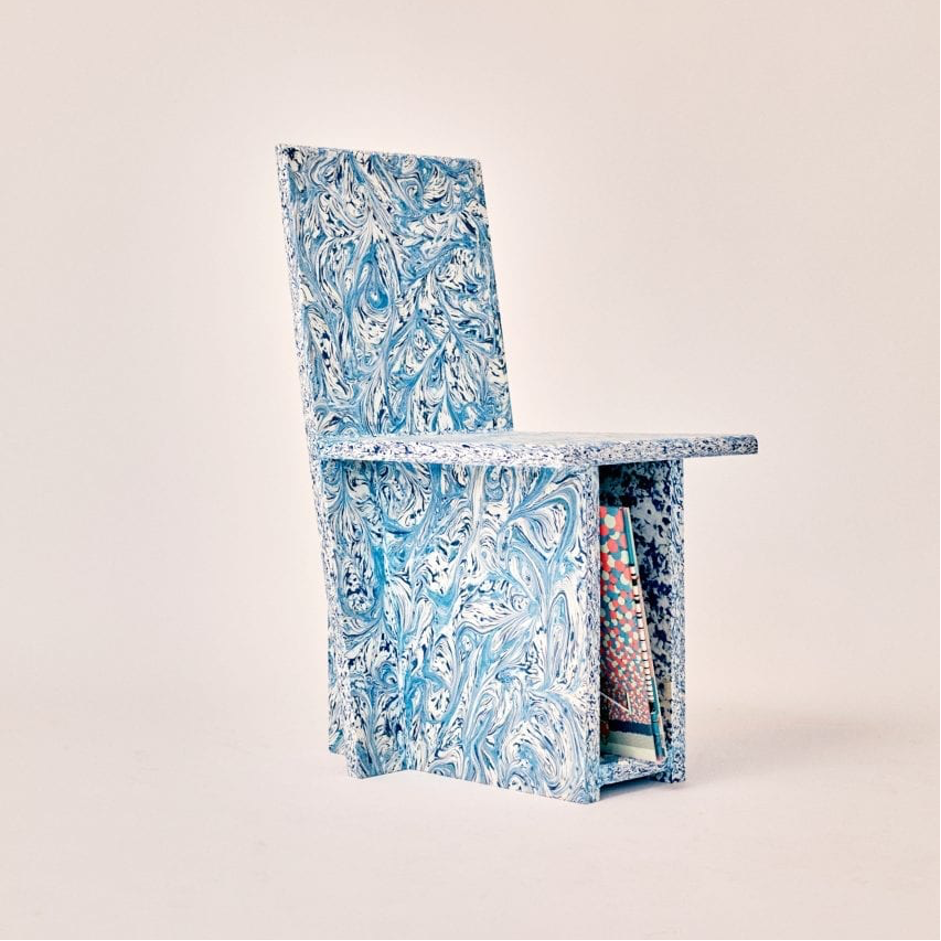 The design collaboration between much-loved DJ, Peggy Gou, and Space Available - a Bali-based design studio - has led to the production of an object aiming to “start conversations and instigate awareness and change” (Daniel Mitchell, the founder of Space Available). It has certainly succeeded in at least its first aim, hence the conversation we essentially have in this written review.

My general thoughts on the Peggy Chair are that, ideally, Space Available would have a specific page whereby all this information discussed can be made clearly available, rather than having to find fragments on their Instagram page, or through articles citing an interview with Daniel Mitchell. Aside from this, though, the design of the chair is great. The attention to detail to ensure it is as easily recyclable as possible, the use of relatively local craftsmen to build it, its multi-purpose feature of the vinyl cubby beneath the seat - they check some good boxes. This collaboration is well thought through and uncomplicated from a design and sustainability perspective. However, I would like to see some more transparency on energy use and the labour force Space Available works with.

20 kilograms of recycled HDPE (high-density polyethylene) go into the making of each chair in Bali. This plastic originates from waste packaging discarded on the nearby island of Java. The recycled plastic sheets are assembled staple-, glue- and screw-less, instead using plastic offcuts as welding rods melted with a heat gun. By using no further components besides recycled plastic, the chair becomes 100% recyclable. The use of a single material is something I can see (hopefully) becoming increasingly prevalent, rendering recycling much easier. This kind of simplicity, I think, is key in sustainability.

The plastic for the chair is collected and sorted by hand off the beaches of Java, although it is unclear who does this collecting. The waste is then shredded through a grinder, placed into a mould, and baked in an oven to form sheets. These sheets are then assembled with heat guns using plastic off-cut welding rods.

I couldn’t find any information on how the collected plastic is transported from Java to Bali for manufacturing, nor whether any offsets for specifically this journey or the one the chair might make to its buyer have been purchased. However, efforts to address this may be through Space Available’s pledge to plant 10,000 trees using 20% of profits from the chairs, which they plan to donate to the Sumatran Orangutan Society (SOS). The SOS supports Sumatrans (inhabitants of the Indonesian island of Sumatra) in protecting orangutans and their forests. This pledge seems to be two-fold, benefiting orangutans, as well as addressing the issue of the chair’s carbon footprint. I feel that 20% of profits is a decent amount, showing a genuine interest in supporting this cause.

Balinese artisans hand-make the Peggy Chair in their own workshops. This is the extent to which I know of who physically produces the chair - I’d like it if Space Available was much more transparent about this area. However, it is good to know that relatively local craftsmen are making the chairs, as opposed to materials being shipped to further afield, larger-scale manufacturing locations.

Space Available generally relies on collaborations with other figures or brands to produce objects made sustainably, mostly of the same material as the Peggy Chair. They target the need for closed-loop systems and maintenance of longevity in what we use, calling for ‘radical recycling’. They claim to work on the basis of education, conservation, and collaboration, taking a nicely holistic view, but I couldn't find anything where they actively list the steps that they (will) take to demonstrate these. The collaborative nature of Space Available is potentially quite valuable, as its influence on sustainability has the power to have a knock-on effect on the fan base or customers of the collaborative partner.

The other half of this collaboration is Peggy Gou, a South Korean, Berlin-based techno and deep house DJ. She has collaborated with Daniel Mitchell before with clothing collaborations, and has her own line, Kirin. These collaborations, as well as Kirin, have seen the use of Tencel for the fabric (compostable and biodegradable renewable raw wood fibres with a claimed environmentally responsible production process), as well as coconut shells for buttons. Peggy Gou has shown signs of being eco-conscious in the clubbing scene, too, with reports of having demands in her contract demanding that catering use no plastic cutlery backstage. Having performed sets at major events and clubs, including Berghain and Printworks, her focus on sustainability could have some very wide positive influences. Personally, I believe it would be really great to see her take this further.

I wish I could give the Peggy Chair an even higher rating, because the design of the chair’s composition and recyclability are considerably sustainable - but Space Available lacks transparency in wider areas. I don't think this is necessarily an intentional concealment, rather - at least partially - a result of the informality of Space Available's online presence, i.e., not having a web page to store this information in one easily accessible place, thus marring the overarching score slightly.