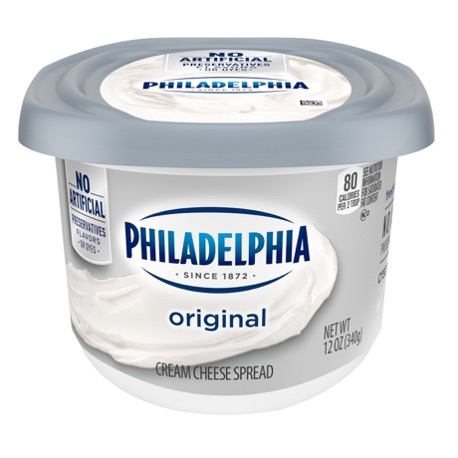 Despite its misleading name, Philadelphia Cream Cheese is not actually from Philly. It was founded in New York in 1872, and given the name “Philadelphia” to associate the product with the Philadelphia area, which had a reputation for its high-quality food and dairy farming at the time. Although Philadelphia started off as a relatively small company, they are now owned by the larger corporation Kraft Heinz. The main ingredients in their cream cheese are milk and cream, making this product extremely unsustainable due to the negative impacts that dairy farming has on the environment. While it seems like the companies are making some effort to be more sustainable, a lot of their goals are not very ambitious and seem performative. More transparency and ambitious sustainability goals will be required if they would like to boost their rating.

Philadelphia cream cheese’s main ingredients are pasteurized milk and cream and whey protein concentrate. It also contains salt, carob bean gum, guar gum, natamycin, vitamin A palmitate, and cheese culture. While it sounds like they treat most of their animals well and make an effort to adopt sustainable farming practices, dairy farming and using cow’s milk still has more significant effects on the environment compared to using alternatives such as plant-based milks. Cow’s milk requires much more land and produces more carbon emissions than any other non-dairy milk alternatives. Dairy cows contribute to greenhouse gas emissions through their release of methane and their manure, which can be degrading to the atmosphere and waterways. Dairy cows also require twice as much water as dry cows, which greatly depletes freshwater resources. Therefore, dairy farming and cow’s milk are not sustainable. Whey protein concentrate is created during the cheesemaking process and also requires milk, making it another unsustainable ingredient. The salt used is most likely produced through solution mining, which involves digging a well into an underground salt deposit and large amounts of water, making salt an unsustainable ingredient. Carob bean gum is made from carob trees, which help stop desertification by reducing soil erosion and require very little fertilizers or irrigation. Carob production also has a low carbon footprint, making it a pretty sustainable ingredient. On the other hand, guar gum uses a lot of water to make, making it an unsustainable ingredient. Natamycin is a food preservative found in soil as a result of bacterial fermentation that has to be centrifuged, filtered, and washed in order to get the final product. Cheese cultures are bacteria strains used to help preserve the flavor and texture of the cream cheese. Overall, carob bean gum is the only sustainable ingredient in Philadelphia Cream Cheese. The rest of the ingredients all have detrimental effects on the environment and are extremely unsustainable.

Philadelphia says that they get fresh milk from farms that are located close to their factories and that most of their farming partners are family-owned businesses with a herd of, on average, 100 cows. They also say that they work with their dairy suppliers to help their farmers adopt good animal welfare practices. One of the farmers that they have featured on their website says that they make sure the cows have ideal air conditions, freedom of movement, individual feeding, and enough space. He also says that they use solar power to help manage energy use on the farm. However, this statement gives no indication about how much of the energy use is solar, leading me to believe that it is a bit performative and was only mentioned in order to make it seem like they use renewables when, in reality, this solar energy could be a very little percentage of their total energy use. While it sounds like they treat most of their animals well and make an effort to adopt sustainable farming practices, dairy farming still has detrimental effects on the environment, as explained in the previous section. The milk is then pasteurized, homogenized, cooled, warmed, and fermented. The cheese is then heated one last time to develop the right texture. Then the salt is added for flavor and the various stabilizers are added to provide firmness. As you can see, there is a lot that goes into getting the final product, meaning that a lot of energy must go into the production of this product. On some of the Philadelphia packaging, it says that the cream cheese is made with renewable energy; however, nowhere does it say just how much of it is renewable energy. Kraft Heinz, Philadelphia’s parent company, has announced that the majority of their electricity will be from renewable sources by 2025. However, “majority” is subjective and not very specific, making it hard to judge just how ambitious this sustainability goal really is. Kraft Heinz has also set the goals of decreasing energy use by 15% and decreasing waste by 20% across all manufacturing facilities by 2025. These goals do not seem very ambitious for a company as big as Kraft Heinz. The cream cheese is packaged in a recyclable tub that Philadelphia says could be reused as containers for leftover food or plants. Beyond this, Philadelphia has also installed anaerobic digesters that convert waste from making cheese into methane gas, which could then be used as a source of electricity for things such as heating homes. While Philadelphia and Kraft Heinz have made some efforts to be more sustainable, a lot of their goals aren’t very transparent or ambitious enough.

As previously mentioned, Philadelphia gets most of their milk from family-owned farms that are located close to their factories. However, since they do not give the specific farms that they get their milk from, it can be hard to tell what the treatment of the workers is like. Additionally, the fact that they say "most of" makes me think that they also get some of their milk from larger factory-farms where the animals are not treated as well. The cows on these larger dairy farms are treated horribly, being constantly artificially inseminated, forced to stand, confined to crowded lots, and living in their own feces. Philadelphia itself doesn’t have much information on who makes their products, but Kraft Heinz says that they set high standards for conducting business in a legal and ethical manner. They also ensure that all of their suppliers comply with local labor, human rights, and environmental standards. However, I find that statements like this are very performative and it can be very hard to tell whether a company actually values these things without any further evidence and information. Kraft Heinz also says that they are trying to hire people from more diverse backgrounds. One way that they are doing this is by expanding their school recruiting list to include partnerships with Historically Black Colleges and Universities. A lot of their statements seem to be very vague and performative, making it hard to trust that they actually value diversity and an ethical work environment. More transparency and specificity in regard to the conditions of their dairy farms as well as other labor practices within the companies will be needed from Philadelphia and Kraft Heinz if they want to boost their rating.