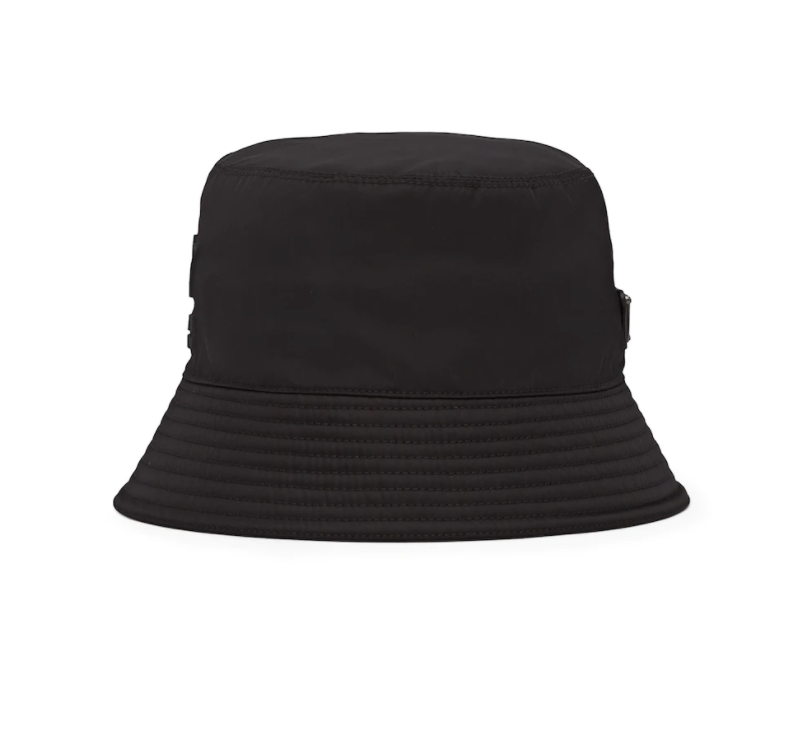 This bucket hat is a great example of Prada seizing the moment when it comes to their recent popularity with the younger generation. They have released ‘Re-Edition’ products which are updated and modern versions of their famous hobo bag that many influencers have been seen wearing. Unfortunately, that bag is made of nylon and not ECONYL! Why they didn’t use ECONYL isn’t clear and is disappointing considering the tremendous opportunity they missed considering their hobo bag is one of their most popular and recognizable products. Overall, Prada’s Re-Nylon initiative shows they are moving towards sustainability, at a fast pace. They made the announcement in 2019 saying they will only need 2 years to completely transfer to ECONYL from virgin nylon. However, they already had the infrastructure to create these products with non-ECONYL fabric, and are not using time and resources to create the ECONYL themselves, so whether or not this fast timeline is that impressive is uncertain. Lorenzo Bertelli became head of Prada marketing in late 2017 and made this significant announcement about Re-Nylon in just under two years. Two months after Bertelli taking the position, Prada made a €50 million, 5-year loan with Crédit Agricole Group that cuts interest rates if Prada meets certain sustainability targets like their Re-Nylon 2021 deadline, or if a certain number of their buildings become LEED Gold or Platinum certified. In February 2021, they signed an even bigger €90 million, 5-year loan with UniCredit that will also cut interest rates if Prada meets the goals of reconversion of production waste and increasing self-produced energy. The way Bertelli speaks about sustainability and responsible production and consumption feel genuine because it’s clear that he is still focused on their bottom line, and his actions have fallen in line with his ideology. He stated that he hopes more high fashion brands will follow Prada on the path of sustainability and that for him, this is “just the beginning.”

Nylon is a polyamide that is a type of plastic derived from placing coal and petroleum—crude oil—under extreme temperature and pressure. The result is a stretchy yet sturdy material, useful for the creation of products ranging from parachutes to stockings. Like other plastics, nylon is not biodegradable and ends up in landfills and oceans, the pollution claiming human and marine life. Producing nylon creates nitrous oxide, a greenhouse gas around 300 times as potent as carbon dioxide. It also requires massive amounts of water for cooling and energy for every stage of the production process. However, there have been recent explorations on how to recycle, reuse, and repurpose this energy-intensive, environmentally harmful production process. Prada has recently launched a new initiative titled ‘Re-Nylon’ which aims to create circular production. They have partnered with a company called Aquafil, who has invented a product named ECONYL which is nylon created from nylon waste. This massive undertaking by Aquafil has proven successful and is a prime example of taking risks on sustainability and them really paying off. Lack of transparency from Prada makes it unclear how the straps, zippers, and brand tags are created and out of what materials. However, this bucket hat is mostly made of ECONYL. The only non-ECONYL fabrics used are cotton for the lining and the enameled triangle logo. If they used organic cotton for the lining, it is in fact renewable and biodegradable. However, since they didn’t specify, I’ll assume they used non-organic cotton as that’s the most commonly used. Non-organic cotton is grown with the use of both pesticides and insecticides which exposes those growing, harvesting, handling, and eventually wearing the cotton! Furthermore, extensive amounts of water are needed to irrigate cotton fields and process them. Soil erosion, runoff, and water contamination are also serious issues concerned with non-organic cotton production. Therefore, this Re-Nylon product, in particular, is a great alternative to their normal line of bucket hats and accessories.

The first step in making ECONYL is the recovery process. Through partnerships with local communities who rescue lost nylon nets and fabric scraps in bodies of water around the world including in Cameroon and Australia. Aquafil has factories across the world including Italy, the US, China, Thailand, Croatia, Slovenia, and the UK. The transport of recovered fabric does have to be transferred to the recycling plants, but I believe the issue of transport is going to be one of the last issues solved in the journey towards sustainability. Until there are great ship and jet fuel alternatives that are cost-friendly, most companies are going to be emitting a lot of greenhouse gases through transportation. Nylon is separated from other waste, shredded, and then prepared for the next stages. Depolymerization breaks the nylon down into monomers and then it is polymerized to create high-grade yarn. Carbon dioxide emissions are halved in comparison to those released when creating nylon from crude oil. The result is a product that is indistinguishable from virgin nylon but far more environmentally friendly. Prada hasn’t been as transparent when it comes to how they actually use ECONYL in their products. Additionally, there are some bags that are blended with things like leather. For this bucket hat’s cotton lining and enamel logo material, Prada provides no extracting or manufacturing information.

ECONYL is created by Aquafil, who are committed to meeting Sustainable Development Goals, but their revolutionary product will not make a difference if companies do not use it. Prada is one of the most well-known European luxury brands that create products ranging from keychains to duffle bags. They recently took a step towards sustainability through their Re-Nylon campaign, which uses ECONYL to create their products. It began in 2019 with six bags but expanded in 2020 to include ready-to-wear, footwear, hats, belts, and more accessories. Prada is showing commitment to the cause of sustainability, with the pledge to convert all virgin nylon to recycled nylon by the end of 2021 and recently announcing they will stop using fur in their products. Through a partnership with UNESCO’s Intergovernmental Oceanographic Commission, they are bringing students from 10 cities around the world into a program titled “Sea Beyond.” After high school teachers give their students 4 eco-responsibility courses, they are tasked with creating an ocean conservation awareness campaign. On March 26, 2021, the winners will be announced and posted on Prada and UNESCO social media, with the school receiving €5000 for educational materials. This initiative shows Prada recognizes the importance of educating future generations which speaks to their ability to look beyond the immediate short-term solutions to climate change and incorporating long-term societal changes in behavior towards sustainability and being informed about it.