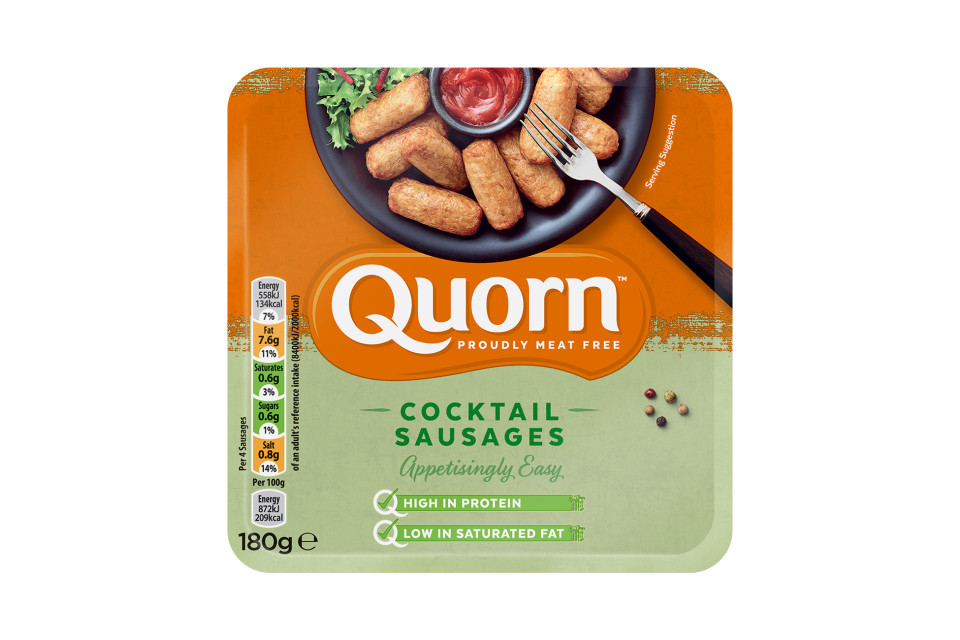 Quorn Cocktail Sausages are highly sustainable because they actively transition consumers away from meat and act as a leader within global markets to be a sustainable brand. Unlike other companies which highlight singular efforts to increase environmental sustainability as ‘enough’ (i.e. green washing), Quorn is committed to holistic sustainability at every level of the production process and it its materials and consumption. It also focuses on negative and positive externalities of its products at a social and economic level, demonstrating clear efforts towards being inclusive and sustainable for generations to come. It is also a relatively cheap product, taking into account the fact that meat is a luxury good, meaning that it is accessible to many different economic groups.

Quorn cocktail sausages are made of a fungus called mycoprotein, which is harvested, chilled and frozen to create the meat-like texture. Therefore, these ‘sausages’, despite their meaty taste and texture, are high in protein and dietary fibre and low in saturated fat. This makes the product very socially sustainable because it is known that red meat consumption is greatly responsible for high cholesterol rates in adults. However, it is worth mentioning that these sausages contain less dietary iron than most meats and the manufacturers have not released much information about additives they use to make Quorn resemble meat. In addition to this, it should be noted that there is currently a class action case against Quorn brought on by the Center for Science in the Public Interest (CSPI) calling for all Quorn products to be labelled “Mycoprotein is a mold [member of the fungi family]. There have been rare cases of allergic reactions to products that contain mycoprotein.”

In terms of environmental sustainability, the Quorn cocktail sausages are seen to greatly minimize their impact on the environment, given that the GHG impact of mycoprotein is 90% lower than that of beef. Quorn also uses sustainable palm oil and they are members of the Roundtable on Sustainable Palm Oil (RSPO). This makes Quorn Cocktail Sausages rating at 0.25 for what it is made of because the mycoprotein has both social and environmental benefits in terms of sustainability.

The Quorn brand has made consistent efforts to reduce its impact on sustainability as a result of the production of its cocktail sausages. Since 2012, the carbon footprint of factories has been reduced by 33% per tonne and water usage per tonne reduced by 16%. Moreover, one of the key benefits of the fermentation process is that it actually enables Quorn to end up with more protein than they started with, meaning that in comparison to meat, it’s production creates a net gain of product at a much lower cost to the environment. Also, they are proud to be the first meat-alternative business to achieve third-party certification of carbon footprint figures. This is consistent with the UN SDG 13 in favour of climate action.
In a similar vein, Quorn as a brand take a science-led approach to environmental research and continuous analysis of the entire supply chain. For example, they have joined the WRAPS’s Courtauld 2015 initiative to reduce waste and emissions by 1/5 and co-signed the Wrap UK Plastics Pact, meaning that their packaging is 80% recyclable and 100% of cardboard is from approved sustainable sources. This reduces their impact across the circular economy by decreasing waste.

Crucially, Quorn are committed to the UN SDGs of food health and wellbeing and climate action and aim to collaborate across their value chain to scale up SDG impacts. They are working closely with children to increase Quorn/meat-substitute consumption in their cooking; for example, there was a 34% increase in children understanding that Quorn is a good source of protein. This is a direct effort made by Quorn to increase intergenerational and social sustainability by increasing awareness among children that too much red meat increases cancer risk. Quorn also advocates for inclusivity in healthy eating; it is working with focus groups of adults with intellectual and developmental disabilities (IDD) because research shows that people with IDD often eat diets high in processed meat and a lack of vegetables. They are dedicated to encouraging vegetarianism such that they advocate for ‘flexitarianism’ as a realistic mode of progress. However, they could be more ambitious in achieving this goal given the strength and potential for their product to replace day to day meat consumption. In terms of the company itself, a positive work environment is exemplified in the fact that 49% of employees have worked at Quorn for over 10 years.