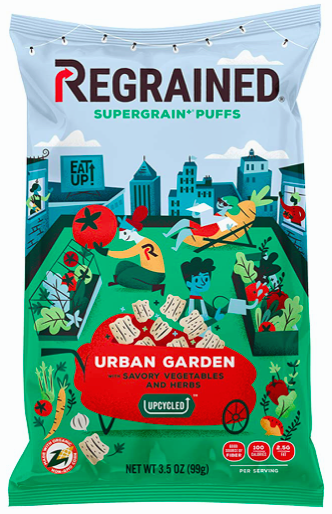 ReGrained is a company committed to fighting food waste by repurposing spent grain from breweries and converting it into a nutritious flour, which they call SuperGrain+. While they started out making energy bars, it seems that they are only manufacturing a range of puffs at this time. While they could stand to be more transparent about their supply chain and the processes used to produce SuperGrain+, I am impressed by their commitment to upcycling food and their honesty about certain shortcomings, such as the plastic based packaging they are currently using.

The primary draw of ReGrained products is their SuperGrain+, a flour upcycled from spent brewers grain (barley, wheat, and rye) used in beer production. Because brewing only requires the sugars from the grain, the leftover spent grain is very high in fiber, protein, magnesium, iron, and zinc. These puffs are plant based, made from cornmeal, corn flour, sunflower oil, salt, yeast extract, sugar, and a variety of other vegetable flavors. It’s a snack option low in fat and high in prebiotic fiber that helps to feed probiotics in your gut. ReGrained has been very transparent about their struggles with packaging. When they were producing their energy bars, they started sourcing a compostable film made from eucalyptus trees. However, as this was a relatively new technology, their products began going stale months before they were due to. In addition to creating food waste, the very antithesis of the company’s ethos, it compromised their relationship with their retailers and customers. They have since switched back to conventional plastic film packaging, but remain adamant that this is a temporary switch and they will continue to find solutions that work. While the current nature of their packaging is unfortunate, I am more inclined to trust this promise as they have already attempted to do so and are honest about their shortcomings, unlike most companies with very lofty promises of sustainable packaging.

Spent grain is a difficult product to repurpose because it finishes its life cycle at the brewery soaking in water, which makes it prone to spoilage if not dehydrated and stabilized efficiently. ReGrained’s thermo-mechanical process of turning this wet grain into SuperGrain+ is patented, so it’s difficult to report on the exact methods and energy inputs. It was developed in partnership with the USDA, and they say that they designed it to be energy efficient while also maintaining high standards of food safety.ReGrained’s SuperGrain+ model is a fantastic way to reduce food waste, water use, and emissions. About 1/3 of all globally produced food is wasted, so enormous water, land, and energy inputs are being used to create more landfill fodder that also releases methane as it decomposes. Every pound of grain that is upcycled saves around 300 gallons of water, and ReGrained claims to have saved 400,000 pounds of food and 80 million gallons of water since Earth Day 2020.In terms of sourcing and manufacturing, I do think ReGrained could provide more information. They originated in San Francisco, and they mentioned several of the local craft breweries that supplied them with grain in an Amazon comment responding to a consumer question about their energy bars: Fort Point, Magnolia, Standard Deviant, and 21st Amendment. However, I found another source stating that they’re products are now produced by a contract manager in Chicago, which makes sense as they were invested in by the Chicago-founded Griffith Foods in 2018. I would really like to see more information about the breweries they source their grain from.They emphasize their SuperGrain+, which is a very impressive product. However, it is only the third ingredient in these puffs, listed behind cornmeal and corn flour. These are both said to be organic, which means they are not grown with synthetic fertilizers or GMOS, but provides little information on other growing conditions such as water use and soil health.

ReGrained is a certified B Corporation, which means their company has been evaluated for its impact on community, workers, and the environment. It was listed as one of their “Best for Environment” honorees in 2019. They are also certified by 1% For the Planet, meaning they have committed to donating 1% of annual sales to environmental nonprofits (though I could not find a list of organizations they give to). I greatly admire ReGrained’s commitment to fighting food waste. They aim to collaborate with more brands and expand use of their upcycled flour, which they also hope to sell as a stand alone product eventually. Recently, they partnered with Doughp to include SuperGrain+ in their brownie cookie dough. They have also worked with the Upcycled Certification Standard Committee to produce an upcycled certification program for products that contain verified upcycled ingredients above a certain threshold. Considering the massive amounts of food waste from breweries and throughout our entire food system, I am encouraged by the expansion of ReGrained’s operations and their popularization of upcycling food.