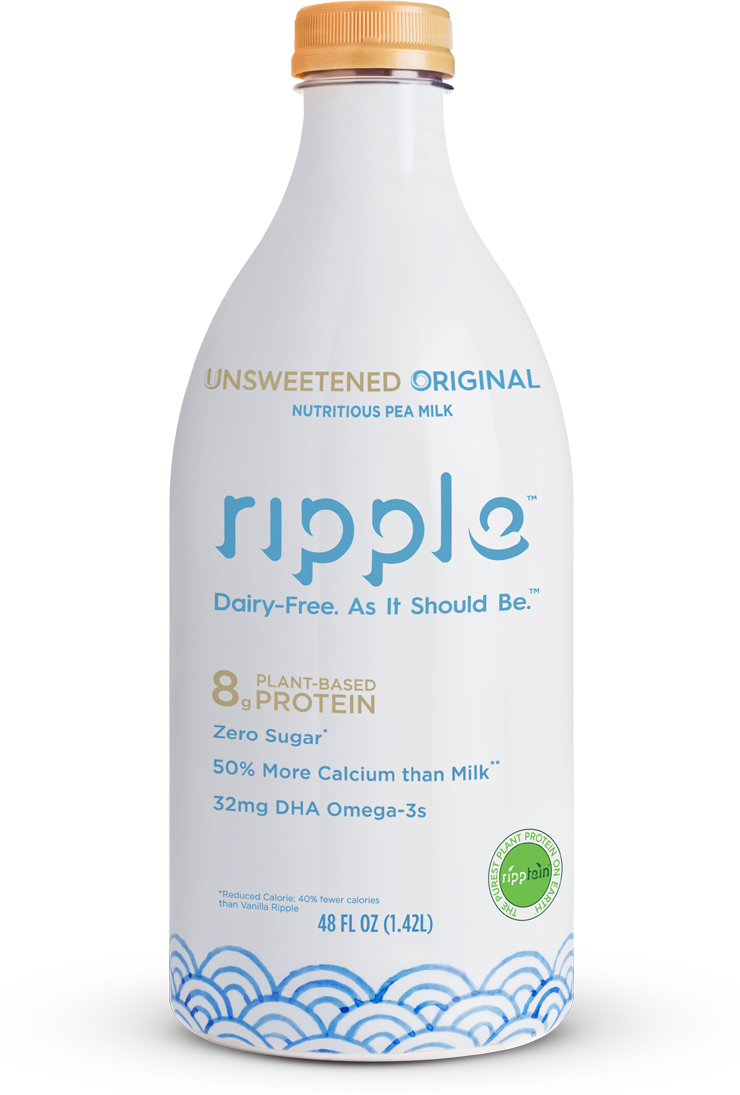 I am really impressed and surprised by Ripple’s pea based milk. Although it may not sound as glamorous as almond or coconut milk, pea milk is certainly one of the most sustainable and healthy options for plant based milk that are on the market. Despite some of the issues with the transparency and some of my qualms about the marketing strategy that Ripple employ, they have created an incredible product which answers many of the questions raised by the unethical and unsustainable practices of the dairy industry. Pea milk is a dairy alternative which is largely sustainable, has a smaller water footprint than alternatives, has high protein, fiber, and calcium content. I would really recommend trying out pea milk as a potential alternative for dairy milk, regardless of whether you are following a plant based diet or not, due to the ease at which the switch can be made (especially for creating drinks like coffee), and the fact that it has a much lower carbon footprint while being healthier and quite a realistic alternative. However, it is not yet totally widely available, and is on the pricier side when it comes to milk like drinks, so obviously keep in mind your own circumstances! Overall however, Ripple has done a great job at creating this innovative product!

The primary ingredient of Ripple pea milk is …. peas. Initially, I was a little bit sceptical about the idea of “pea milk”. However, pea milk is actually an incredible imitation of dairy milk, while providing a superior of protein and calcium which can be produced very sustainably! Peas are easily grown, and they naturally contain vitamins and minerals which cannot be found in dairy, such as K, C, and B1, manganese, dietary fiber, copper, phosphorus, and folate, while still containing important properties like calcium and protein. Additionally, Ripple unsweetened original also boasts Vitamin A, Vitamin D, and Vitamin B12, which support healthy living, especially to those who follow a plant-based diet.
The founders have been vocal about the benefits of peas and the reasons behind their choice - Renninger, one of the co-founders claim that peas are a “scalable and economical protein source”, that is high in fiber, low in fat, and cholesterol-free. Peas are quite similar to soybeans and boast many of the similar benefits to soy milk, however unlike soybeans, yellow peas haven’t been modified for herbicide resistance and peas are hypoallergenic.
However, ripple also contains sunflower oil to create the milk-like consistency. The sunflower oil that it contains is not certified organic, which is an important potential room for improvement for ripple.
The nutritional value of pea milk is also extremely commendable. In 1 cup of the unsweetened original pea milk, there are only 70 calories (which is more than half of the calorific content of dairy milk), as well as 8 grams of protein. An equivalent amount of dairy milk would provide the same protein content, but almost double fat content (4.5 vs 8 grams). Apart from soy milk, the majority of other milk imitations have almost negligible protein content, so Ripple have made important strides in providing a source of plant-based protein. It also provides 45% of the recommended daily intake of Calcium!
Additionally, Ripple pride themselves on their packaging, which is crafted from 100% post-consumer recycled plastic (PET, #1) and itself is completely recyclable, the label included.

The first step to creating pea milk is growing peas. Peas naturally grow in areas with abundant rainfall, and thus the water usage for pea plantations is overall very low, especially when compared to almonds which are used to create almond milk for example. Additionally, as yellow peas fix their own nitrogen, there is no need to introduce unsustainable fertilisers which have a large carbon footprint. This means that the water/carbon footprint is much lower than dairy milk, and even significantly lower than almond milk and other alternative plant drinks.
However, then the peas need to be transported to the processing plant. However, one of the biggest issues with the way that Ripple make their products is the sourcing of the yellow split peas they use. Despite being very vocal about sustainability, they faced backlash in 2016 for not disclosing that they sourced their peas from France, as they were unable to find peas of a requisite quality in North America. By not mentioning or factoring in the transportation costs of getting the peas from France to their plant in Illinois, Ripple was accused of greenwashing by overstating their sustainability claims and not being transparent about their supply chain. The peas are transported by cargo ship and then railway, and although choosing to use these slower transportation methods as opposed to flying them, investing in sourcing high quality peas from North America would be more sustainable and in line with their mission.
To turn peas into milk, Ripple first has to take ground dried peas which they get from a vendor, and then soak them with water and sodium in their plant in Illinois. This allows for protein solubilisation, so that the protein can then be extracted and then heated with a pH and salt solution to remove the flavour, colour and carbohydrate molecules. The remaining mixture is put in a giant centrifuge, separating the pea protein from the rest of the liquid. This white colour, flavourless protein paste is the key ingredient to Ripples produce – they call it “Ripptein”. Ripptein is then supplemented with water, sunflower oil, algal oil and flavouring to produce a milk-like liquid.
Overall, the process of producing can be considered pretty sustainably, especially in a comparative context. Producing a glass of Ripple requires half a gallon of water. However, when compared to 60 gallons to produce dairy milk and 20 to produce almond milk, Ripple has succeeded in producing a product which has a much smaller water usage, as well as a lower carbon footprint due to the use of less fertiliser.

Ripple Foods is a Silicon Valley start-up that has generated the majority of their funding through fundraising from sustainable investors. This means that they don’t have a large parent company or greater corporate interests which may interfere with their aims or compromise their process/principles.
Ripple is very concerned with the sustainability of their products and it is evident throughout their choices in packaging, protein sources and the products they create.They have been certified by B-Corporation with a score of 102, above the threshold of 80 which is required for certification for positive impact on workers, community, environment, and customers. Their best score is for their environmental impact, however, they also boast high scores on workers wages and benefits, but score lower on issues such as corporate accountability and transparency. These aspects of governance are areas that Ripple needs to work on.
However, the branding that Ripple employs places a heavy emphasis on the sustainability of their product without fully disclosing their fully supply chain or life cycle. As mentioned in the previous section they have been accused of greenwashing, for failing to disclose the provenance of their peas which would exacerbate the carbon footprint of their products. As such, I am concerned about Ripple’s transparency – many of the claims they make are intended to attract conscientious consumers, but act more as marketing claims than a genuine representation of their practices to those who are interested. Additionally, another thing that is very notable on their website and content is comparing almond and pea milk trying to place a negative emphasis on the production of almond milk and its carbon and water footprint. While the nature of these comparisons is valid due to the significant water usage in the almond milk production process, I think many of the
While they are able to make some these comparisons, I think that some of the claims detract from important messaging on their own methods and manufacturing, while being largely unconstructive in providing alternative methods.
Also doesn’t break down the supply chain and life cycle of these different beverages which makes some of the comparisons moot and solely for the purpose of marketing.