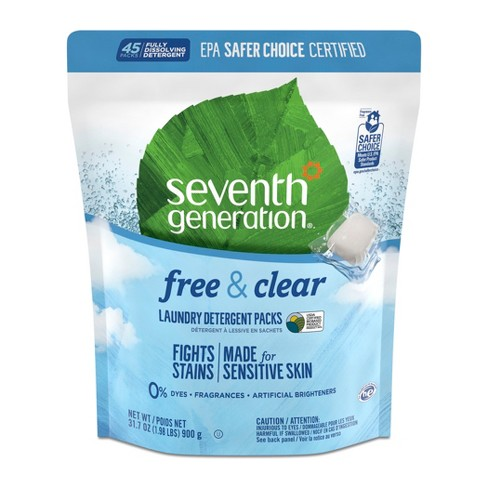 Seventh Generation laundry pods seem to be a more human health conscious alternative to traditional options such as Tide Pods as some say synthetic detergents can cause allergies or breathing issues. They are a B Corp which does indicate some level of environmental and social sustainability, however, I am not quite convinced it is a super “eco-friendly” company as they paint themselves to be. For every positive I could find about the company, there was a negative (or two) to cancel it out. Compared to a more main stream company, like Tide, Seventh Generation does seem to be a baby step towards a more environmentally and socially sustainable option. However, it is definitely NOT the answer to sustainable cleaning products. I am confident that Seventh Generation can improve their environmental sustainability and transparency as they have the resources of a large company to make crucial changes.

Seventh Generation Laundry Detergent Packs are made of about 10 ingredients that are noted either as “plant-derived” or “mineral-based”. The Seventh Generation website includes a link to SmartLabel which very briefly outlines the purpose of each ingredient (ex: “fabric softener”), but doesn’t give any information about the sustainability or origin.

The encasing of each pod is made of a water soluble polyvinyl alcohol film and glycerin. The product is entirely biodegradable, fragrance and dye free, is USDA Biobased Product 94%, and is EPA Safer Choice Certified. USDA Biobased means that the given percent is the amount of renewable biological ingredients included. Biobased products often have more traditional alternatives which likely contain more petroleum based ingredients (not considered plant based) but perform very similarly. EPA Safer Choice Certification basically means this product contains ingredients that are less dangerous for human and environmental health compared to traditional alternatives. The Environmental Working Group (EWG) gave the laundry pods a grade A (out of A-F) showing only mild concern for causing respiratory issues.

Despite not being directly made out of petroleum product, I think it is important to note that some of the  procedures required to use plant-based products in a “green” detergent increase the carbon footprint of the final product. A traditional detergent may end up having a smaller carbon footprint because of this.

I do like, however, that this product is a “high efficiency” laundry detergent which means is is made to be used in conjunction with washing machines that use less water.

I am not granting any earths in this category because of lack of information regarding how and where this product is made. I could only find basic information that gives me very little insight into the sustainability of production.

Despite being owned by Unilever, Seventh Generation is a B Corporation, which means that they meet environmental and social wellbeing standards as well as are transparent and accountable for their actions as a company. However, they remain under fire by people claiming Seventh Generation products are not quite as sustainable as they may appear to be. EWG rated many (if not all) of Seventh Generation’s products in terms of environmental and human health. Nearly 60% of their products received a grade C or below. This is pretty concerning to see coming from a company that advertises that they are “clean” and “green”.

However, Seventh Generation has a Supplier Code of Conduct that emphasizes social justice, equality, and “radical transparency”. This code was created to show suppliers Seventh Generation’s expectations in terms of ethics. Seventh Generation writes that they require their manufacturers, suppliers, and distributors to not participate in child labor, prison labor, discrimination, harassment, etc. I would normally applaud this, especially from a large company, however, it was also included in this code of conduct that should suppliers, manufacturers, and distributors not meet these standards, they should have a remedial plan to meet them. This seems like a total cop out to me! Seventh Generation could easily be benefiting from child or prison labor for years as long as their partner says they have a plan to fix it eventually. This does not cut it for me.

Another deficiency is that the name “Seventh Generation” comes from the “Great Law of the Iroquois” stating that society should take into consideration the impact of their actions on the seven generations after them. I was born, raised, and now attend college on land that was stolen from the Iroquois Nation (what is now Upstate New York). Despite the fact that I support the sentiment that Seventh Generation has derived their name from, I think that this is a clear example of cultural appropriation. From what I can find, neither of the founders appear to be of Indigenous heritage. However, the Seventh Generation website does offer an explanation in 2018 (30 years after the company has been using the name “Seventh Generation”) to their name stating an employee of Indigenous descent suggested the name. It would be interesting to get the opinion of some Iroquois people to see if they would also consider this as appropriation of their culture.