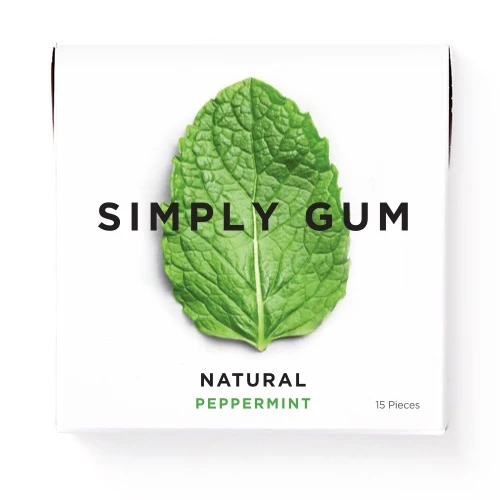 Simply Gum is one of the few non-plastic gums out there, with innovative flavors and attractive packaging - if it weren’t for the price, this would likely be my gum of choice. It’s around $3 per pack, about 3 times the price of a regular pack of gum, but for good reason. Most gum (almost certainly every brand you know) is made of “gum base”, which the FDA allows to be composed of plastic. And, this isn’t some over-dramatization, either; gum base is literally made up of polyethylene and petroleum wax, among other synthetic chemicals used to make plastic bags, car tires, and glue. Aside from carcinogenic (cancer-causing) and other health concerns, gum made from these materials is not biodegradable. Simply Gum provides an all-natural alternative, with 5 ingredients, one of which is chicle base, made from the sap of the sapodilla tree, which is how the earliest humans made gum. Of course, all this sounds great, but the brand says nearly nothing about their supply chain or how they source their ingredients, which is my main issue with the brand - I worry about a US company sourcing from trees in Central America without any mention of how they do so fairly and ethically. Overall, though: if you have the money to spend on $3 gum, I can’t find any reason why you shouldn’t spend it on Simply Gum.

Simply Gum’s spearmint gum (they have numerous flavors, including ginger and coffee) has 5 ingredients: organic raw cane sugar, chicle base, peppermint oil, organic vegetable glycerin, and organic rice flour. It’s non-GMO-, vegan-, and Kosher-certified, as well as free from xylitol, dairy, gluten, nuts, and soy. The main draw, however, is the fact that instead of the traditional ‘gum base’ made from plastics in regular gum, they source their base from the sap of the sapodilla tree in Central America, which is healthier (no plastic) and better for the environment (biodegradable). The packs have the pieces of gum (which are like little nubs, not the traditional pressed stick), which are not wrapped, alongside “Post Chew Wraps” for when you’re done with the gum. These wraps are also biodegradable, and their website states that when filling online orders, they “aim to limit excessive shipping materials and use recycled packing materials when we can”. This is no promise, but it’s a step in the right direction.

This is a short and sweet - the only information available on how their gum is made is the following: it’s manufactured in Brooklyn, NY; the chicle sap is sourced from sapodilla trees in Central America; and their ingredients are supposedly “sourced from the highest quality suppliers across the globe”. Not much to go on - I have no clue where geographically in Central America they source the chicle, how they harvest the sap, or anything about the farms or farmers’ conditions who grow the trees. For an American brand going into Central America and harvesting sap to make a profit, this is somewhat concerning. I have no clue what’s going on at all within the supply chain, other than trusting their statement that they source from pure and premium sources, and that doesn’t even speak to the ethics of their trade or labor conditions. I appreciate that it’s manufactured in the US - at least I understand the labor laws they should be complying by in the manufacturing facility - but other than that, I can’t really reward them for what I don’t know.

Simply Gum is woman-owned and was, at one time (accordingly to news articles published when they were first starting), a B-Corp. They no longer market themselves as a B-Corp, nor are they in the B-Corp registry, which is a bit suspicious; I almost would have preferred that they were never a B-Corp, not that they got stripped of B-Corp status. It could, however, just be a matter of saving money, as B-Corps must pay an annual fee for their certification. Moving on, though, the brand has humble roots, as the founder began making gum in her kitchen in New York City and then grew it into a business. The growth was tremendous, as they were able to make numerous retail partnerships and are now in major grocery stores and even Urban Outfitters - which is a testament to their branding and target audience. One thing to note is that while they claim sustainability as a central piece of their mission, they have a partnership with Amazon that the founder describes as “invaluable”. Amazon pretty much goes against the core of what true sustainability means, so I definitely dinged them for that. Other than these small notes, however, it seems like a down-to-earth brand, but the transparency is again an issue in that I don’t have much information about them or their company. I have more than I have about their supply chain, but that’s a low bar.