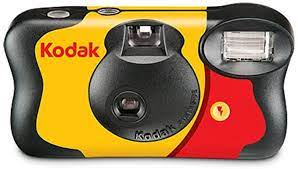 Like many others, I’ve noticed disposable cameras have starting trending again. Despite the impressive capability of mobile phone photography, there has been a turn toward the retro-style, grainy disposable camera images that Kodak’s single use camera produces. Whilst these products are obviously disastrous in terms of sustainability as an alternative to phone cameras, I wanted to see how successful Kodak has been at mitigating the impacts posed by disposable film cameras. Overall, it is clear to me that Kodak is a company that is doing reasonably well in terms of sustainability – not only are they setting ambitious goals with regards to social and environmental sustainability, but also, in 2018, they sought an external audit on their sustainability processes to ensure that they were making progress in the right direction. However, the disposable nature of this product is inherently problematic. I’d suggest to consumers that as a rare treat, these cameras are okay for sustainability if recycled in the correct ways. However, if consumers want to make film photography part of their life and are able to spend a little more, a reusable film camera is the best compromise. Whilst purchasing a reusable film camera is certainly a financial cost to be taken seriously, when one considers that the disposable ones retail at around $11-$13, it is an investment that would soon be repaid!

The Kodak FunSaver Camera is a simple form of disposable camera with no zoom function, meaning it is made up of only the hard plastic casing, the flash, the film, and the battery. The actual body of the camera is made of a hard plastic, typically polyethylene. This kind of plastic is derived from non-renewable fossil fuels, meaning that the mass production of these cameras depends on the depletion of a limited resource. Furthermore, this black plastic camera is problematic for home recycling, as it often ends up in the landfill due to black plastic being notoriously difficult to recycle (as it is frequently the same colour as the conveyor belt, meaning it is harder to sort). The film within the camera is made from a polyester base – once again, this is a product of non-renewable materials created through a reaction between coal and petroleum. Furthermore, in the process of developing the film (converting images into digital or paper form) the silver halide ions which sit on the polyester film are washed off by film processors; these often end up in water systems and are highly toxic.

As mentioned above, several constituent parts of the Kodak disposable cameras are made from non-renewable fossil fuels. These are problematic in themselves, but also the extraction and the processing of such materials is highly energy-intensive. One area of sustainability that Kodak seems to have topped in the market of disposable cameras is the recycling processes. The recycling rate of Kodak cameras is now 70% in the US and about 60% worldwide, which is very impressive. Kodak has set up a collection box system for those who develop the film themselves, and when cameras are sent off to be processed, they are automatically sent for recycling. The cameras are sometimes simply reloaded with a new film and battery, but more often, the plastic casing is shipped to a recycling centre where they are reground and used again. Whilst better than landfill, constantly remoulding these cameras is energy-intensive, and completely unnecessary when compared to a reusable camera. All of the batteries used in these cameras are reused and recycled within the Kodak company. This means that large proportions of the materials used in these cameras are now made from recycled plastics, however, this is not yet a closed loop.

Kodak has made impressive pledges about the end-of-life management of their products, stating that "We understand that being a steward of the environment means facilitating the safe reuse, recycling and disposal of our products." In their most recent pledges on sustainability, they set the goal of 99% of products/resources being reused or recycled by 2025 (which is monitored by their yearly reviews/progress reports) – if this is pulled off, Kodak will be in strong standing to offer consumers one of the most affordable and sustainable disposable cameras on the market (in contrast to products such as the Fujifilm Quicksnap and the Lomo 400 Simple Use, which are not only more expensive at at least $15 or more, but also don’t appear to have such comprehensive sustainability programmes).

There is fairly little information on the Kodak website about who makes the cameras. Searches on other webpages told me that the film was made in the USA, whilst the camera body was made in China. Both these countries have been noted as having problems with factory working conditions. Whilst Kodak has made many pledges on their website about the excellent conditions and benefits their workers have, without actually being given more information on where these cameras are produced, it is very hard to ascertain the exact conditions under which these cameras are made. However, in many respects, Kodak have excellent human resources/health + safety policies. For instance, Kodak has been scored at 100% on the Corporate Human Rights Campaign Foundation Index and has been certified by the same organisation as one of the “Best Places to Work for LGBT Equality.” Furthermore, Kodak has always been ahead of the times in the sense that the first Kodak Safety Committee was established to prevent workplace injuries way back in 1911, and they have been developing programmes to improve worker wellbeing and sources ever since. In 2017, they achieved a 50% reduction in workplace injuries in the last 10 years. Whilst this, again, seems impressive, it is hard to tell, (when they don’t give us actual numbers to go off), how bad the situation is and was, and whether that significant improvement is sufficient.